Desus and Mero are late-night comedy’s most Jewish hosts 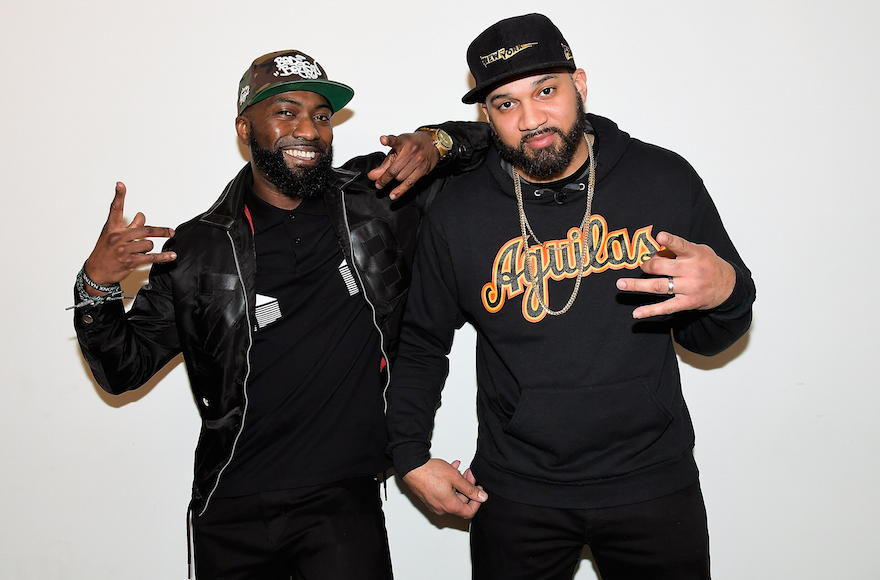 NEW YORK (JTA) – Since October 2016, for four nights a week at 11, Daniel Baker and Joel Martinez — better known as Desus Nice and The Kid Mero, respectively — have appeared on their self-titled Viceland show “Desus & Mero” and declared that it’s “the No. 1 show in late night.”

Although the ratings do not, in fact, coronate “Desus & Mero” as tops in late night (“facts don’t matter” is a favorite phrase of the duo), the comedians have made an outsized mark on pop culture since their 2016 TV debut, leading to appearances on “The Tonight Show Starring Jimmy Fallon” and ESPN’s Sportscenter, among countless other American cultural mainstays. Their show — a much more casual, low-budget version of the standard late-night talk show, full of obscenities and candid riffs on the news — has provided a refreshing nonwhite perspective on culture and the stories of the day.

Both are 35 and grew up in the Bronx. Baker is Jamaican; Martinez is Dominican.

“[I]n a landscape in which black people dominate the culture but have few recognized channels to respond to it, the show, which stars two American black men, provides a venue for black authority in the mainstream,” Jazmine Hughes wrote in The New York Times Magazine earlier this month.

So it wasn’t too surprising when the duo announced recently that they are leaving Viceland — Vice Media’s quirky upstart TV channel, which hasn’t performed that well — for Showtime to headline the larger network’s first half-hour late-night series. Their Viceland finale airs Thursday night.

The Showtime version, which doesn’t have a debut date yet, could be a “mash-up of ‘The Daily Show’ and the Chappelle show,” according to Martinez.

What has been surprising, however, is that from the days of their Complex magazine podcast, through its evolution into a web series, to its current iteration as a TV show, Desus and Mero have consistently engaged with an unlikely topic: Jewish culture.

Baker and Martinez, both first-generation Americans, would be the first to admit that their propensity to talk about Judaism probably sounds strange. But both were born and bred in the world’s most Jewish city, and Martinez is married to a white Jewish woman, with whom he has four children. Ezra Koenig, the Jewish singer of the indie band Vampire Weekend and a friend of Martinez, once called Martinez’s kids his “Jewminican dynasty.”

When Kyle O’Quinn of the New York Knicks appeared on the show — ESPN has dubbed the NBA player New York’s “bar mitzvah man” because he has attended so many of the coming-of-age ceremonies — Martinez attempted to coax him into attending his own son’s eventual bar mitzvah.

But Martinez isn’t the only one who references and often affectionately pokes fun at Jewish culture. He and Baker still host a podcast, “Bodega Boys,” and each episode includes an at least 10-minute introductory period. During the intro, the hosts assume the identities of a seemingly innumerable number of “A.K.As.” One of Baker’s aliases is named “Desus Rothstein, the Jamaican Jew,” and features a stereotypically whiny voice that recalls Woody Allen. Some of the episodes have been titled “Jew Bang” and “Jews for Desus,” and in a recent episode, “Cop and Goat,” Desus spent 10 minutes helping Mero pass a “Jew test” to determine whether he is a legitimate member of the tribe. They call the test the “Jew.E.D.” — a riff on the GED high school equivalency test.

The conversation eventually turns to whether goat is kosher. The hosts discuss kashrut, or kosher laws, and Desus says that “goats are kosher because they are land animals and have split hooves and …”

“They are not swine,” Mero interjects.

Mero, returning to the JewE.D. bit, rattles off a bit of Hebrew – what he randomly calls a “Hanukkah song” – before yelling “Dayenu!”

“I’m trying to read the Torah with that pointy thing,” he says, referencing a yad.

The worries that their Jewish humor might dip into anti-Semitic territory are countered by the comfortable knowledge of Jewish culture and, sometimes, the intricacies of Jewish religious practice they show off. Several of their Jewish guests, ranging from Seth Rogen to MSNBC host Ari Melber to ESPN’s Max Kellerman and beyond, have expressed pleasant surprise at the hosts’ grasp of Judaism.

Martinez and Baker also tweet about Jewish holidays, showing a bit of Jew-adjacent pride and mashing Jewish and black culture in the process.

ME WAITING FOR MFS TO BE DONE WITH THIS BOOK SO I CAN EAT BRISKET #PASSOVER #LIT #SEDER pic.twitter.com/8vzrt7iMK1

And yet, perhaps reflecting a recent flare in tensions between their own communities and their Jewish counterparts — largely set off by a prominent Women’s March leader’s appreciation for the noted anti-Semite Louis Farrakhan — several non-Jewish writers, pop culture critics and former colleagues of the pair opted not to comment to JTA when contacted. One, referring to their Jewish-related humor, said “it’s kind of a touchy subject.”

But Desus and Mero don’t single out the Jewish community for a biased mocking, instead treating Jews as they would any other community with whom they interact: as a legitimate target for humor. They are equally likely to mock Albanians in the Bronx or Koreans in Queens as they are Jews in Brooklyn — that’s the beauty and, frankly, the point of the show. Above all, the pair’s proximity to the Jewish community and knowledge about its members and traditions make their comedy even funnier.

Midway through their most recent “Bodega Boys” episode, in the middle of a discussion about reckless driving in Williamsburg, Brooklyn, the pair breaks into a freestyle rap session with Jewish-themed lyrics.

“Let’s celebrate the Sabbath, what what,” Desus says, and both break down in laughter for at least 30 seconds.

“We talk a lot about Jew shit,” Desus says as Mero continues to laugh. “People are probably like, what is this [show]?”

He answers his own question: “Bronx shit, Jew shit and immigrant shit.”