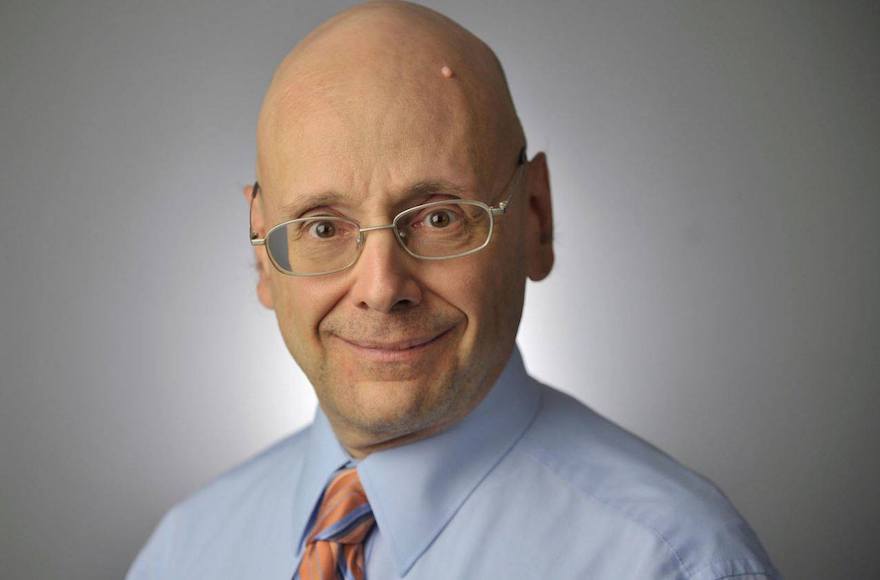 Gerald Fischman was an editorial page editor who was respected by his colleagues. (The Baltimore Sun Media Group/Facebook)
Advertisement

(JTA) — One of the five victims killed in a shooting at a newspaper in Annapolis, Maryland, was Jewish.

Jarrod Ramos, 38, of Laurel, Maryland, was arrested and  charged with five counts of murder, the Baltimore Sun reported. The report did not say how he pleaded. Police said Ramos had been the subject of critical coverage in the paper.

Fischman, who worked for the Capital Gazette since 1992, was known for his annual editorial on Christmas, despite the fact that he was Jewish, the Sun reported. Colleagues described him as a quiet, committed professional who was humorous, extremely knowledgeable and polite. He always wore a V-neck cardigan, regardless of temperature, and often would work a midnight to 5 a.m. shift. Colleagues typically would arrive in the morning to find sticky notes from Fischman on their desks asking them to fact-check his editorials.

“He was kind of a mysterious guy,” reporter Joshua Stewart told the Sun. “He wasn’t social, and this was the most interaction we had with him. It was a testament to his work.”

The Sun also said he married late in life, to a Mongolian opera singer he had met online. At an awards event shortly after he wed — Fischman won many regional prizes for his work — he was asked him how he met his wife.

“I typed ‘Mongolian opera singer’ into a dating site,” he replied.

Ramos’ dispute with the Gazette began in 2011 when a columnist wrote about a criminal harassment case against him. He brought a defamation suit against the columnist and the organization’s editor and publisher. A court ruled in the Capital Gazette’s favor and an appeals court upheld the ruling.

Police said 170 people were inside the Gazette’s building during the attack. Staffers scrambled to find cover from the bullets, some diving behind desks, witnesses said. At least three people sustained serious injuries in the shooting, Radio WMFE reported.

Smith, the sales assistant, “was kind and considerate, and willing to help when needed,” her boss, Marty Padden, told the Sun. “She seemed to really enjoy to be working in the media business.”

Hiassen’s wife, Maria, told NBC that her late husband “loved being a dad, an editor who helped shape young talent, and a creative writer and humorist.” The couple had three children together.

McNamara was a veteran reporter and editor. On his LinkedIn page, he described himself as a beat reporter for University of Maryland athletics and the Baltimore Orioles minor league system. He also helped put together the daily sports section.

Winters “was in many ways the best part of the newspaper in that she cared so much about the city,” said former Gazette editor Steve Gunn. Winters worked as community reporter for the paper. She had four children.