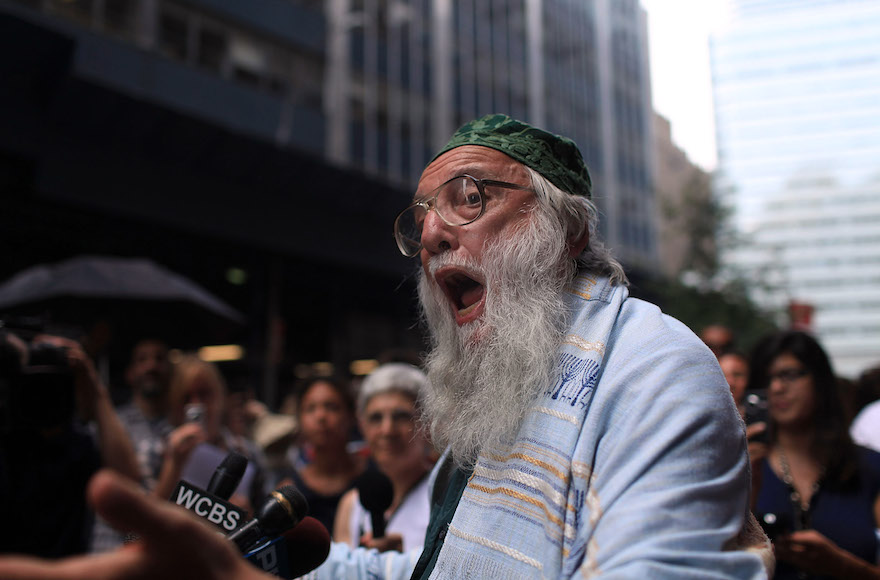 (JTA) — Rabbi Arthur Waskow, a longtime political activist, was arrested while protesting outside an Immigration and Customs Enforcement office in Philadelphia.

Waskow, 85, required assistance to stand and walk with his cane after he was handcuffed with a plastic tie on Friday by police outside the ICE office in the city.

He and six others who call themselves Elders and Friends Standing With Immigrant Children and Their Parents were arrested for blocking access to the office. They had been sitting outside the office for about two hours before police arrived. The protesters were cited for “failure to disperse” and later released.

Waskow made a speech before he was arrested that was caught on video and posted on Twitter.

“We understand that by the local law what we are doing violates that and we see it as the freest thing we can do is to submit to arrest at this moment,” he said. “Criminals are living in the White House who would tear away even nursing children from their mother’s breasts.”

He went to say that “we implore you as citizens to be aware of the criminals that are wrecking the decent lives of decent families. If you need to arrest us so be it, but remember who the real criminals are.”

Waskow has protested for civil rights and against the Vietnam War, as well as the war in Iraq. He has written 24 books, including  “The First Freedom Seder – 1969.”

Full video of Rabbi Waskow: “We understand that by the local law what we are doing violates that and we see it as the freest thing we can do is to submit to arrest at this moment.” #AbolishICE #ShutDownBerks pic.twitter.com/rhneqVVBgZ