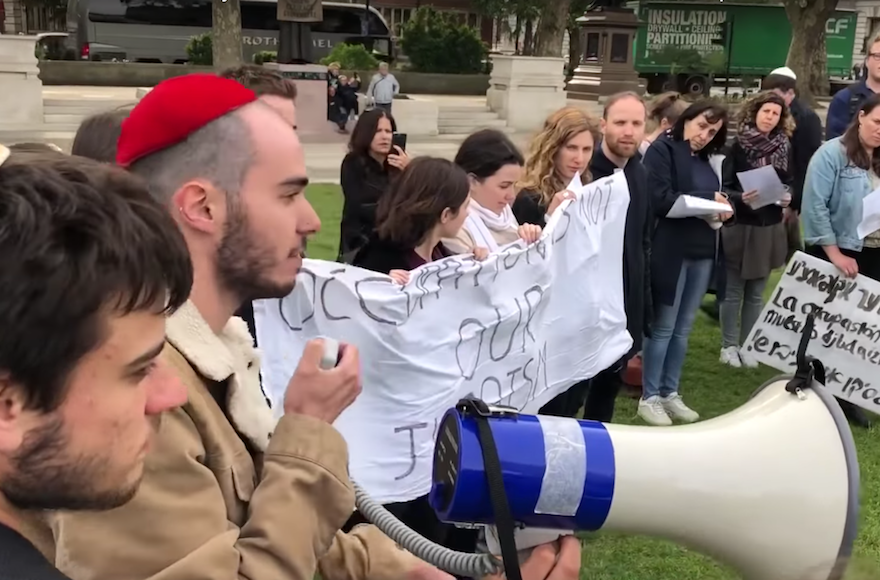 Demonstrators at a Kaddish for Gaza event in London, May 16, 2018. (Screenshot from YouTube)
Advertisement

(JTA) — A Reform movement youth leader in Britain who participated in a public Kaddish for Gaza was removed as a leader of the youth group’s summer tour in Israel.

Nina Morris-Evans was dropped Monday as a leader for the tour of the movement’s youth wing, RSY-Netzer. The Movement for Reform Judaism said the move is “in the best interests of the participants,” the London-based Jewish News reported.

Her dismissal came a month after the group had confirmed that Morris-Evans would still lead a tour, despite her participation in the mid-May event in which several dozen young people gathered outside Parliament Square and recited the Jewish mourning prayer for Palestinians killed by Israeli forces during clashes on the border with Gaza as part of the so-called March of Return.

She retained her position after apologizing for describing the Palestinians deaths in the clashes in a subsequent op-ed for the Jewish News as “murder.” As part of her reinstatement at the time, Morris-Evans was required to undergo a mentoring program.

She said at the time: “I hope that my deep love for Israel, my acknowledgement of the difficulties that have risen from my actions and my intention to ensure these young people have the best month of their lives will make me the kind of leader that you can feel proud of.”

On Monday, however, a joint statement issued by RSY-Netzer, Reform Judaism and UJIA, which oversees Israel tours from 13 religious and ideological movements, said: “Over the course of extensive dialogue with an Israel tour leader, unfortunately it has become clear to RSY-Netzer, Reform Judaism and UJIA that we cannot arrive at a position of certainty that (her) leading tour is in the best interests of the participants.”

The groups said they could not add any details since it is a personnel issue.