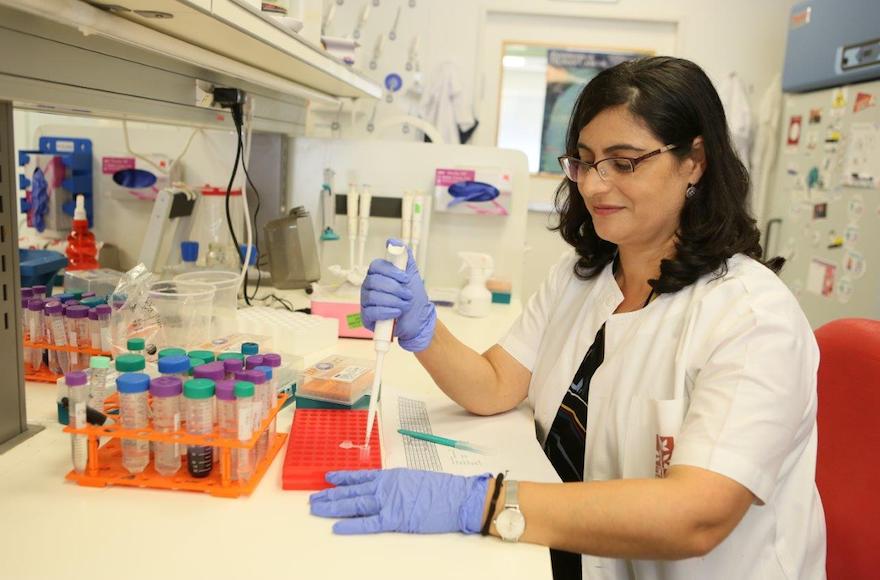 Neta Milman, a scientist at the Rambam Clinical Research Institute in Haifa, is researching pancreatic tumors with an eye toward developing immunotherapy treatments for cancer. (ICRF)
Advertisement

JERUSALEM – There’s a war raging in Israel with life and death consequences worldwide.

This war does not involve tanks, drones or tunnels, and the enemy is not Iran, Hamas or Hezbollah.

Rather the war is being waged in science labs and the battlefield is the human body. The enemy: cancer.

Israeli scientists are experimenting with a new weapon in this war: immunotherapy, which manipulates one’s immune system to identify, fight and destroy cancer cells.

While immunotherapy has been around for decades, new advances in the field coupled with recent drug approvals from the U.S. Food & Drug Administration have intensified interest in immunotherapy and its applications for cancer treatment, especially late-stage cancers that resist conventional treatments. Immunotherapy drugs already are helping patients with melanoma, lung, stomach, liver and bladder cancers, as well as some blood cancers.

“Cancer immunotherapy is exciting because, as opposed to other forms of therapy, it engages the body’s own highly sensitive system for detecting cancer cells and destroying them,” Israel said. “This area will have a major impact on cancer outcomes going forward.”

That potential is partly what drew Dr. Nathan Karin, an Israeli immunologist at the Technion-Israel Institute of Technology, to immunotherapy research. He’s studying whether the cellular mechanisms driving autoimmune diseases like Type 1 diabetes and multiple sclerosis can be utilized to create immunotherapy drugs to fight cancer.

“We believe that if you amplify regulatory T cells you can treat autoimmune disease, and if you block their activity you can thwart cancer,” Karin said.

Karin is among dozens of Israeli cancer researchers receiving financial support from the Israel Cancer Research Fund. For the organization, which raises money in North America to support cancer research in Israel, one of the big challenges is deciding which promising research projects to fund. ICRF received 160 grant proposals in 2017 alone and can fund only a fraction.

That’s where a new partnership with the U.S.-based Cancer Research Institute, known as CRI, comes in. Starting next year, ICRF and CRI will be partnering to identify and fund the most promising immunotherapy research being conducted in Israel.

A joint scientific review panel including expert researchers and doctors from around the U.S. and Canada who are involved with ICRF and CRI will meet every fall to evaluate the most promising Israeli immunotherapy research proposals, judging them on the basis of innovation, feasibility and likelihood of impact. The initiative is called The Immunotherapy Promise.

The FDA approved the first immunotherapy drug recently, but the field dates back to 1891, when William Coley, a physician and cancer researcher, observed that some cancer patients infected by Streptococcus bacteria experienced a dramatic and spontaneous improvement. He began injecting the bacteria into his patients, with mixed results.

The treatment was nearly abandoned amid skepticism from Coley’s peers and the advent of radiotherapy and improved surgical techniques.

Today, however, new avenues of immunotherapy research are underway, and the field is considered among the most promising new approaches to cancer treatment, according to Jill O’Donnell-Tormey, CEO and director of scientific affairs at CRI.

“There’s still more research that needs to be done in order to realize immunotherapy’s full potential,” O’Donnell-Tormey said. “By partnering with the Israel Cancer Research Fund, which is well known among Israel’s top academic research centers, we will be able to support more lifesaving science in a country that is home to some of the world’s most talented research scientists.”

Neta Milman, a scientist at the Laboratory for Applied Cancer Research at the Rambam Clinical Research Institute in Haifa, is among ICRF’s recent grantees. She is studying tumors called pancreatic ductal adenocarcinoma, or PDAC. These tumors contain mostly non-cancerous cells that include a group of immune cells that promote tumor growth by producing small particles that transport genetic information to cancer cells. The small particles are called exosomes.

“We’re trying to figure out what the exosomes are sending to the cancer cells,” Milman said. Exosomes one day could be a cancer-treatment delivery system because they can be engineered to target cancer cells, she said.

Dr. Michal Lotem, who heads the Center for Melanoma and Cancer Immunotherapy at Sharett Institute of Oncology at Hebrew University’s Hadassah Medical Center in Jerusalem, is receiving funding to support work on a new checkpoint receptor called SLAMF6, a protein found in immune cells. When activated, these receptors modulate the immune response so that there isn’t too strong a response against normal tissues. But when it comes to cancer, the goal is to inhibit these receptor proteins so that the immune response against cancer will be as strong as possible.

“If you target this protein effectively, it can double or triple the effect of immune cells when they attack their target, Lotem said.

Gideon Gross and his team at MIGAL-Galilee Research Institute in the northern Israeli city of Kiryat Shemona are developing immune gene therapies, a treatment where a patient’s T-cells are modified in a lab in order to attack cancer cells.

Gross, a pioneer in the field, together with Z. Eshhar at the Weizmann Institute of Science created in the 1980s the first chimeric antigen receptors, or CARs – cancer-fighting molecules constructed in the laboratory and inserted into T-cells. For his ICRF project, Gross hopes to improve the performance of CAR T-cells.

For Karin of the Technion, who is well known for cutting-edge research into autoimmune diseases like MS, the Israel Cancer Research Fund’s backing enabled his first foray into cancer research.

“ICRF’s support was the motivation for me to get into cancer immunotherapy research,” Karin said. “Now most of our attention in the lab is on melanoma. Without them we wouldn’t be doing what we’re doing.”