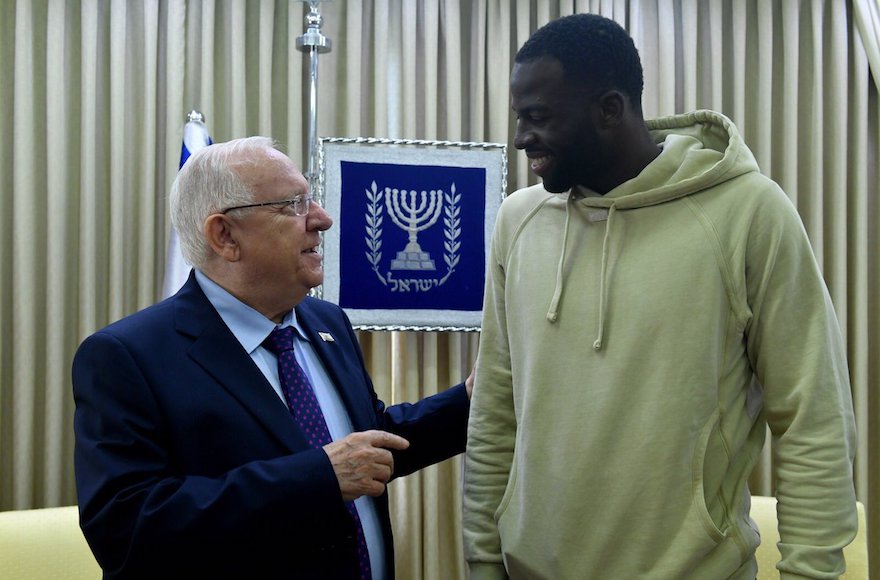 Green presented Reuven Rivlin with a Warriors jersey during their meeting Wednesday. The basketball player is in Israel as part of a visit organized by the Friends of the Israel Defense Forces, Hadashot News reported.

Tremendous pleasure today to welcome Draymond @Money23Green of the Golden State @Warriors. It’s not everyday you get to meet an #Allstar! I hope this will be only your first visit to Israel, come back and visit us soon. pic.twitter.com/kaDwq5i4C8

“It’s not every day that I meet an All-Star,” Rivlin told Green. He also tweeted a welcome to Green.

Rivlin said that like many Israelis, he watched the NBA Finals between the Warriors and the Cleveland Cavaliers live, which is very early in the morning in Israel. The Warriors swept the Cavs to win their second consecutive title and third in four seasons, all at the expense of the LeBron James-led Cleveland squad.

“You did not have a simple task, defending LeBron James,” the president told Green. “You’re an amazing team, and it was a true pleasure to watch you play. I hope this will only be the first of many visits.”

During a visit with the Border Police’s counterterrorism unit, he played basketball with members of the unit on a court donated by American donors through Friends of the IDF.

In posts on Reddit, some criticized Green for meeting with the president of Israel while he and his Warriors’ teammates declined to meet with President Donald Trump, as is traditional for NBA championship teams.