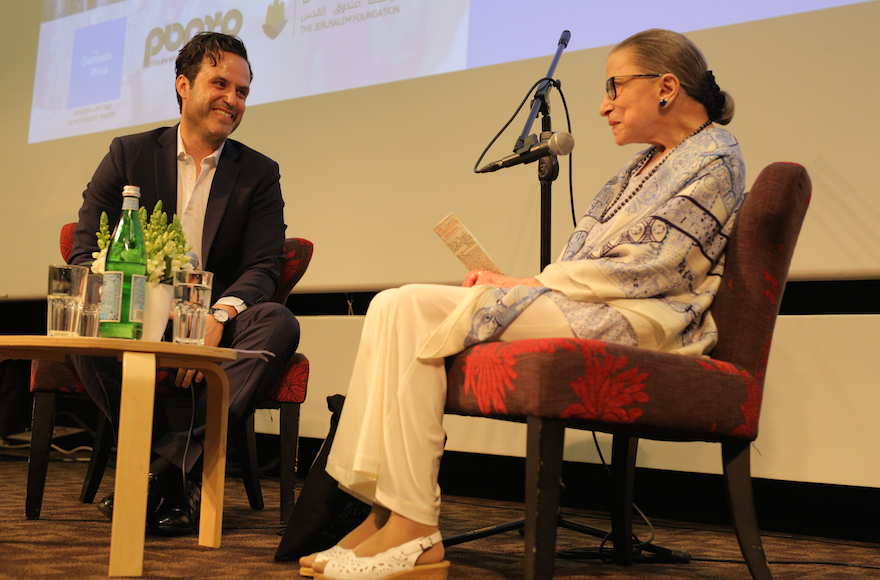 JERUSALEM (JTA) — Supreme Court Justice Ruth Bader Ginsburg described how grateful she was for her Jewish heritage during a screening of a new documentary film about her life and career at the Jerusalem Cinematheque.

“The demand for justice, peace and enlightenment runs through Jewish history and tradition,” she said Thursday, describing how she is reminded of this fact every day when she enters her judicial chambers and is confronted with a poster proclaiming the biblical verse “Justice, justice thou shalt pursue.”

“My room has the only mezuzah in the U.S. Supreme Court,” she said, noting that “growing up Jewish, the concept of tikkun olam, repairing tears in the community and making things better for people less fortunate, was part of my heritage. The Jews are the people of the book and learning is prized above all else. I am lucky to have that heritage.”

In Jerusalem to receive a lifetime achievement award from the Genesis Prize Foundation, Ginsburg — who is equally well known for her scathing dissenting opinions as for her lifetime commitment to gender equality — was feted by the Jewish state’s political and judicial elites.

In a speech honoring her American coreligionist at the award ceremony on Wednesday, Israeli Supreme Court President Esther Hayut praised Ginsburg as a spokeswoman for the marginalized and ignored.

“Law is about justice, and the experience of injustice gives one profound insight as to what justice should look like,” Hayut said, The Jerusalem Post reported. “Through her decisions, Justice Bader Ginsburg upholds the values without which democracy would be an empty vessel.”

Former Israeli Supreme Court President Aharon Barak made a similar statement, calling Ginsburg “one of the great legal minds of our time; an outstanding Jewish jurist whose fearless pursuit of human rights, equality and justice for all stems from her Jewish values.”

Speaking at the ceremony, Ginsburg evoked the memory of Anne Frank, who questioned common gender roles in her famous diary.

“When I became active in the movement to open doors to women, enabling them to enter occupations once closed to them — lawyering and judging, bartending, policing and firefighting, for example — I was heartened by the words of a girl of my generation,” said Ginsburg, 85. “I am a judge, born, raised and proud of being a Jew. The demand for justice, for peace and for enlightenment runs through the entirety of Jewish history and Jewish tradition. I hope, in all the years I have the good fortune to continue serving on the bench of the Supreme Court of the United States, I will have the strength and courage to remain steadfast in the service of that demand.”

Initially offered the Genesis Foundation’s annual Genesis Prize, which comes with a cash grant, Ginsburg said she demurred, worried that the presence of Israeli politicians on the selection committee would run afoul of the Constitution’s emoluments clause prohibiting government officials from receiving gifts from foreign powers. She said it was only after the foundation agreed to create a new lifetime achievement award whose selection committee was apolitical that she relented and agreed to be honored.

The award later went to actress Natalie Portman, who declined to attend the award ceremony because of her political differences with Prime Minister Benjamin Netanyahu. 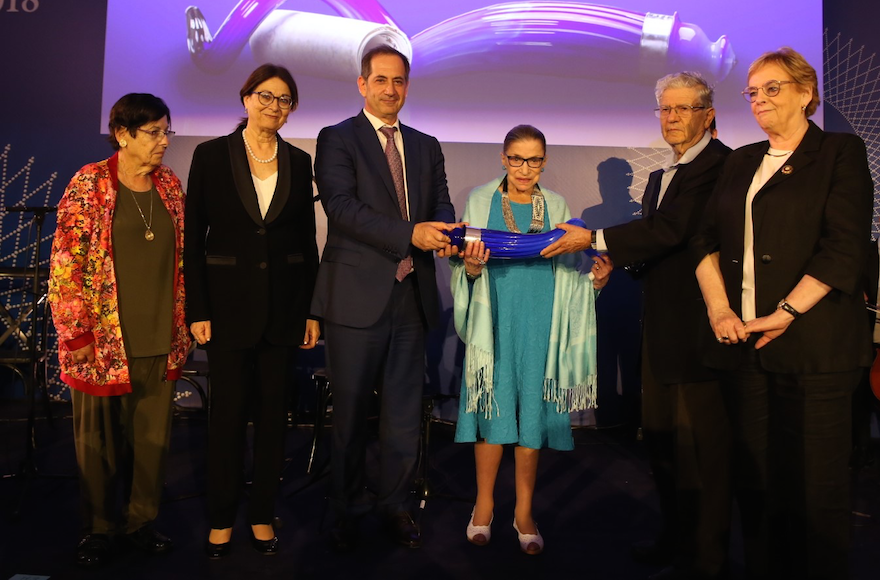 Addressing the crowded theater after the screening of “RBG,” Ginsburg made two pleas. The first was a call for renewed bipartisanship in Washington, D.C., specifically when it comes to confirming federal judges — a process that has become deeply politicized in the years since her ascension to the Supreme Court. The announcement last week that Anthony Kennedy will be retiring as the high court’s frequent swing vote, and the nomination battle ahead, did not come up in her onstage interview with Benjamin Freidenberg, an Israeli filmmaker.

Ginsburg also reiterated her longstanding support for the adoption of an equal rights amendment to the Constitution. Holding up a pocket copy of American’s foundational legal text, the justice said that she would like to be able to show it to her great-granddaughter and tell her “your equality is a fundamental tenet of the United States.”

Asked what she would do if she weren’t a judge, Ginsburg, who is well known for her love of opera, replied that if she could choose any other career, she would be “a great diva.”

“But sadly for me I’m a monotone,” she said, “so I can be [a diva] only in my dreams and occasionally in the shower when I sing.”