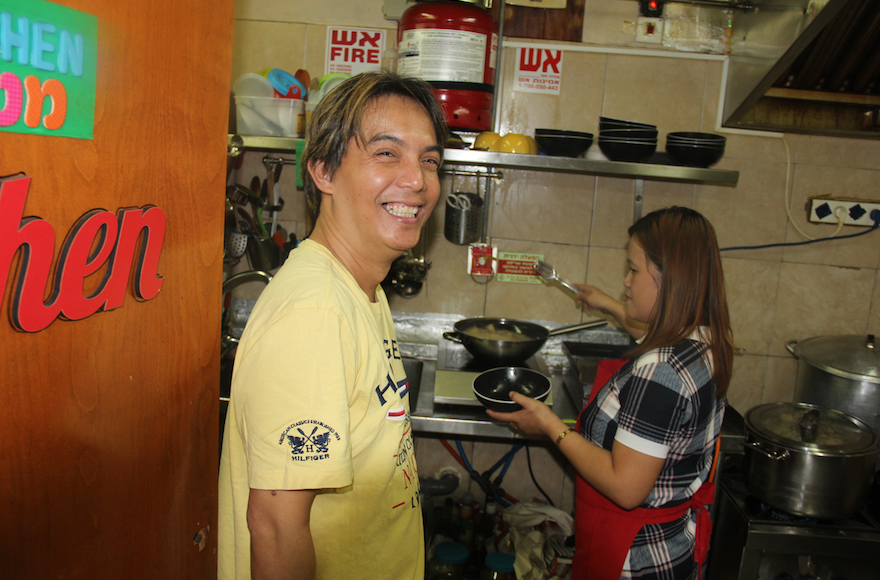 Ronaldo and Bernadette Lopez, who arrived in Israel in 2003, now run a Filipino restaurant and converted to Judaism in April. (Ben Sales)
Advertisement

TEL AVIV (JTA) — One of the biggest days of the year for Ronaldo and Bernadette Lopez is Christmas.

They open up their Filipino restaurant in South Tel Aviv, and their friends bring their families, crowd the place and eat embutido, a rolled pork dish from their shared home country.

But this year may be different because the Lopez family no longer celebrates Christmas. In April, they converted to Judaism. And as of May, they still hadn’t told their Filipino friends about the decision, which followed a year-and-a-half of study and an oral exam they had to pass.

“Not yet,” Ronaldo said, laughing as he prepared chicken in their restaurant last month. “I’m keeping it as a secret for us. Until now I am still in the cloud nine. I don’t believe that I passed everything. They will be shocked. They will not believe that I already converted to Judaism.”

Like many of the approximately 25,000 Filipinos working in Israel, the Lopezes came for jobs as caregivers to the elderly, arriving in 2003. But with the conversion, they have taken a major step that most of their fellow expatriates have not: While many Filipinos come to Israel for a few years to make money in a developed economy, they tend to remain culturally separate from Israelis.

Many communicate with their employers in English, with a few Hebrew words mixed in. They largely retain their Catholic religion. Because Filipinos live with their clients for most of the week, they have a much smaller footprint on the everyday life of Tel Aviv than neighboring African asylum seekers, who face racism and cultural resentment. (Relations between Israel and the Philippines are also improving. Rodrigo Duterte, the controversial Filipino president, is slated to visit later this year.)

But the Lopezes have sought out connections with Israelis. They have lived here for 15 years. This is the only country their two sons, aged 9 and 13, have known. Israel’s government gave them a license to run their restaurant. And Bernadette says Israelis have been supportive of their integration.

“I like the way the Israelis teach us how to be independent because we don’t have any family here,” she said. “It’s better for us to tell everything to Israelis because they’re everyone who can teach, who can tell us what is good, what is not good.”

Ronaldo dismisses the idea of a return to his home country.

“What will I do in the Philippines?” he asks.

Speaking of the conversion, Ronaldo says the couple did it not for themselves but for their children.

“What can I do? They are already comfortable here,” he said. “They don’t want to go to the Philippines.”

Bernadette began selling Filipino food in a nearby park, and their restaurant license came through 11 years ago. Now they spend their days in the kitchen cooking specialties from home. The square room, with its rectangular tables lined up in rows, fills up on Sundays, which many Filipinos take off. The Lopezes chose the diverse, poor immigrant neighborhood of Neve Shaanan for the restaurant because many Filipinos live there.

“We only came here to work, not to make anything else,” Ronaldo said. “To stay here longer, you have to be a good person here — not like you’re the owner of the country.”

But while the couple are soft-spoken and polite — friendly and accommodating, for example, as an American journalist peppers them with questions in their hot, small kitchen — they grin and radiate joy as they discuss their conversion. Bernadette finds Passover and Yom Kippur particularly meaningful. Earlier this year, their son became a bar mitzvah, and they hope to obtain Israeli citizenship.

“Yom Kippur, this is the day we really like because you should think what you did bad, what you didn’t do good to others,” said Bernadette, who has adopted the Hebrew name Shir-El (God’s song). She doesn’t even mind the daylong fast that accompanies the repentance.

“Since it’s in your heart, in your mind that you have to do this, it’s your mitzvah,” she said. “It’s really good. You will not die in one day.”

But Ronaldo has struggled with Judaism’s theological aspects. After an education in Catholic schools and a lifetime of worshipping Jesus, it was not easy to switch to rejecting the New Testament and believing that everything he had learned was wrong.

“The hardest part is how to take away what I used to do,” said Ronaldo, who took the name Aharon.

In the past, he said, “I go to the church every Sunday, I pray to that. When I converted Jewish, they tell me that’s not true. … Now I understand what is the truth or not the truth. I’m in the middle, but I believe what Judaism tells us is true. I’m sure right now because I already studied for a year-and-a-half.”

Bernadette, for her part, is more concerned about what will happen if their boys serve in the Israeli army for three years in the country’s mandatory draft.

“When I think about it, and my friends told me their son is there, I start to cry,” she said.

I was not able to verify some details of the Lopezes’ story. The Israeli Chief Rabbinate, which conducts all recognized, Orthodox conversions in the country, does not provide records of its conversions by nationality. And because study can be done with a private rabbi before the official oral exam, Chief Rabbinate spokesman Kobi Alter could not confirm the name of the teacher that the Lopezes mentioned. I likewise could not independently reach people who had that name.

“Every conversion is evaluated for itself based on the couple that wants to convert,” Alter told JTA.

The Lopezes said that eventually they will tell their Filipino friends about their new religion. But they are worried about what it will do to those relationships, as their friends may not understand the choice.

“Filipinos are Christians, OK?” Ronaldo said. “They will not accept us because before I was a Christian. Now we already converted to another religion. I don’t want to debate about our religion.”

And in the meantime, they’re not changing the restaurant menu. (A majority of Tel Aviv’s restaurants are not certified kosher.)

“Maybe someday,” he said. “Right now I’m thinking about it because my customers are all Filipino. Not everything is kosher.”