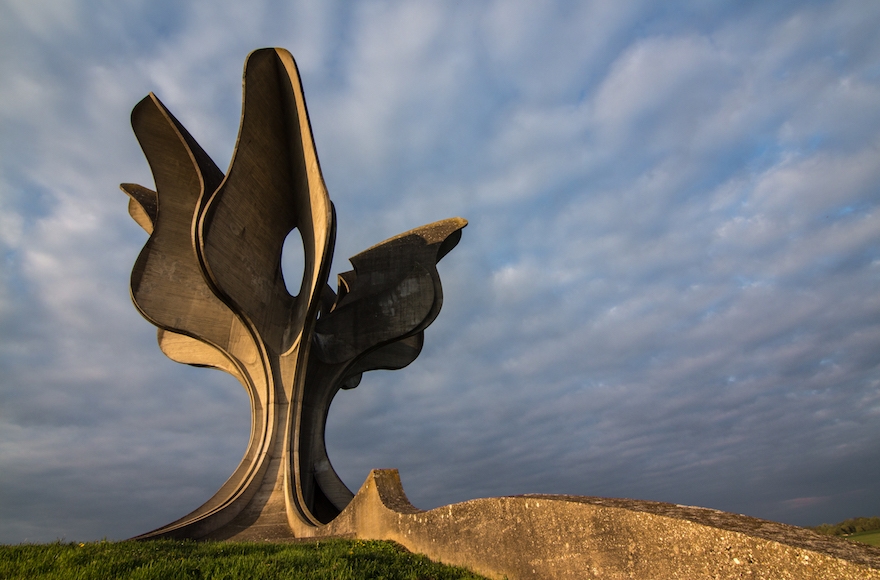 (JTA) — An Australian sunglasses company that used a Holocaust memorial in Croatia for a photo shoot has removed its new advertising campaign and apologized to a Jewish leader.

The Valley Eyewear company shot the photos for the campaign for its Black Zero collection at the Spomenik memorial at the site of the Jasenovac extermination camp, the Sydney Morning Herald reported.

More than 70,000 people — mostly Serbs and Jews — were murdered at the camp by order of the Nazi-allied Croatian government during World War II, which established the camp in 1941.

The Spomeniks are a series of concrete sculptures and monuments commemorating historical events throughout the former Yugoslavia. The Jasenovac memorial appeared in the background of the photos and video shot for the eyewear firm.

“Valley Eyewear was completely unaware of the sensitivity of a number of the locations, in particular the Jasenovac site where a photo shoot was undertaken for approximately 30 minutes,” Crawley said in a statement to the newspaper’s parent company, Fairfax Media.

The company has not offered a public apology, however.

Valley Eyewear had traveled to Croatia, Serbia and Bosnia to create a marketing campaign documenting locations of Spomenik sculptures.

Tourists have come under fire in recent years for taking selfies at the former site of the Auschwitz Nazi camp and the Berlin Holocaust memorial, among others.

“The purpose of these monuments to the victims and survivors of the Holocaust is to evoke a response from an audience that will give them some level of insight into events that are well beyond their range of experience and understanding,” Wertheim told the Sydney newspaper.

“In an educational or cultural context, this can be a powerful experience. But if images of these monuments are commercially exploited to market products, especially if the purpose is to glamorize or otherwise add to the appeal of the products, then the effect is the opposite, one of desensitization.”