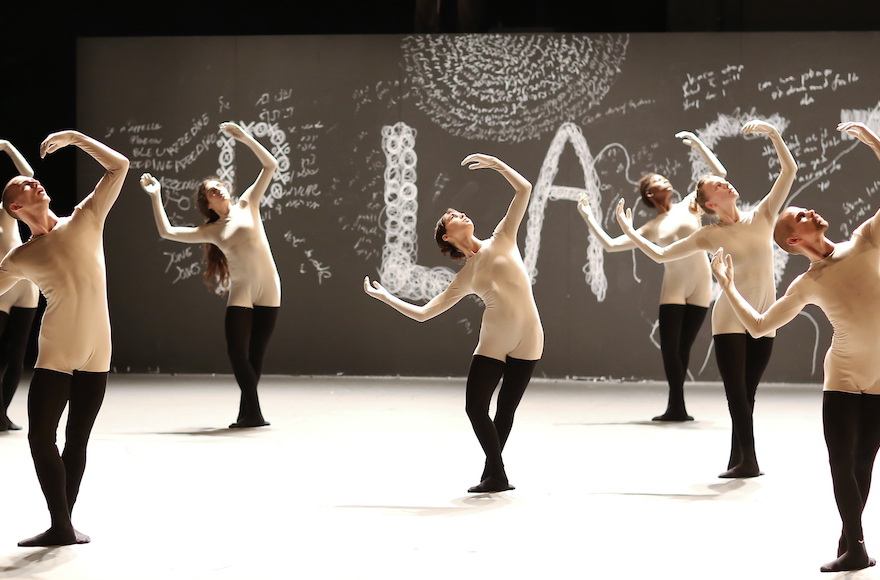 (JTA) — In the quiet opening of “Naharin’s Virus,” an hourlong dance piece by the famed Israeli choreographer Ohed Naharin, an onstage narrator tells you what the evening won’t be about. You the audience will not receive its due. Your curiosity will not be satisfied. You won’t agree on the meaning of what you are about to see.

OK, fair enough. You don’t go to modern dance for the plot, at least not in the conventional sense. You go for the pleasure of seeing bodies in motion, to see how the dancers carve up space and translate relationships into a wordless language.

But works and performances by Israeli artists always beg for interpretation. The novelist Amos Oz has spent a career denying that his books are political allegories about the “situation.” Nobody believes him.

Naharin has usually been coy about the political meaning of his works, but what are you to make of an Israeli-made piece, like “Virus,” that  is performed largely to Arab folk music and has a large black wall stretching the length of the stage, onto which the dancers chalk the giant word “PLASTELINA”? Is that a corruption of the word “Palestine” or a reference to the popular modeling clay? Is the wall a wall or a backdrop? Is the music homage or co-optation?

And what do you make of all this when a crowd of boycott-Israel activists gathers outside, as they did Tuesday night in Manhattan when the Batsheva Dance Company’s Young Ensemble performed “Virus” at The Joyce Theater? By attending, are you celebrating Israel’s cross-cultural diversity, artistic ferment, international appeal and, let’s be honest, leftist artistic community? Or are you standing up to its critics under the guise of watching a dance troupe, shaking a fist at the boycotters like the counterprotesters waving the Kach flag? 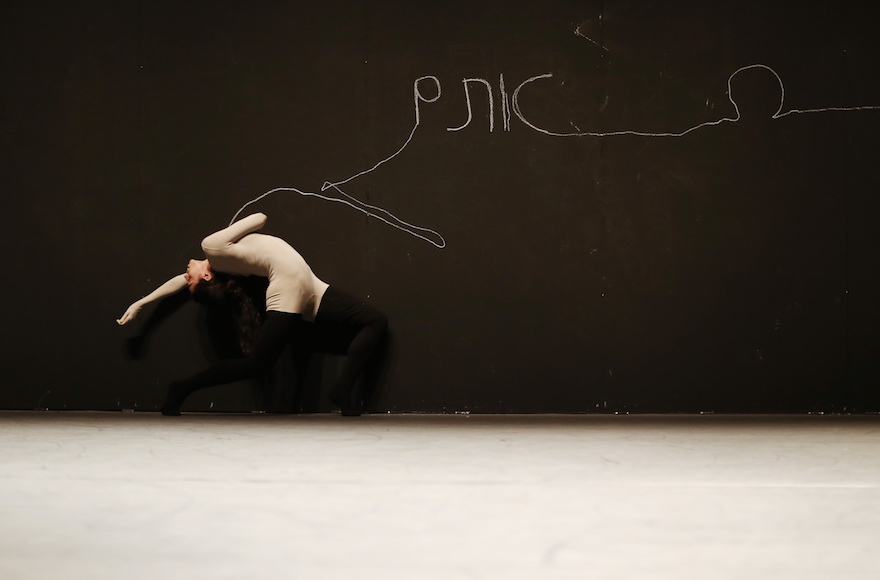 “Naharin’s Virus” features a black wall as a backdrop, on which dancers chalk graffiti as they perform to a score that includes Arab folk music and a piece by Samuel Barber. (Ascaf)

Happily, most of these questions melt away during the performance, itself a revival of a piece Naharin created as Batsheva’s artistic director in 2002. (“Naharin’s Virus” runs through July 22 at The Joyce.) Based in part on an experimental play by the Austrian Peter Handke, “Virus” includes more than a dozen dancers in tight, khaki-colored leotards and high black leggings that make them look both nude and like dressmaker dummies. Naharin has become world famous for a dance vocabulary he calls “Gaga,” which combines tight muscular control with explosive, wild movement. “Virus” begins with a great visual joke: On stage is one of those Inflatable Men that you usually see advertising car dealerships. The way it spasmodically inflates, deflates and waves its nylon arms is pretty much Gaga itself.

The Young Ensemble, a developmental troupe, includes dancers from Poland, Holland, Ukraine, Israel, Guatemala, Miami, Paris and South Africa. When they aren’t performing in tight, organic unison, individuals break off into crazed solos, or dangle from the wall, or draw on it in chalk. Eventually the narrator, who stands on top of the wall, stops explaining the nature of the theater experience to begin hurling insults at the audience (Handke’s play is called “Offending the Audience”), ranging from “milquetoast” and “pussy-grabber” to “dirty Jew” and “capitalist.” Trust me: It’s all in good fun.

The boycotters were gone by the time the dance ended, and so were most of the audience’s misgivings about a piece that defies interpretation. The pleasure was in the thing itself. These days more than ever, it’s a huge relief to put politics aside, even if it is just for the length of a dance performance.