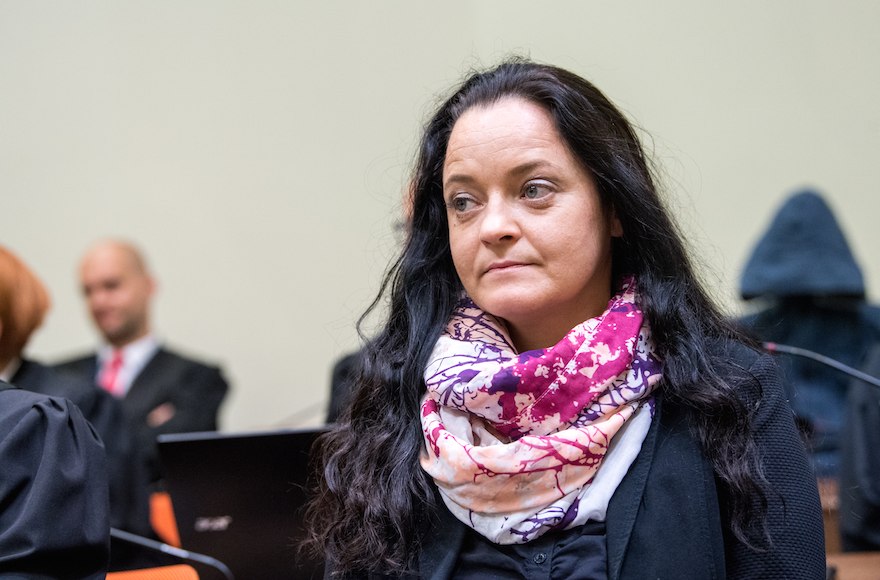 (JTA) — A neo-Nazi terrorist was convicted of murder in what observers have called one of postwar Germany’s biggest trials.

Jewish leaders in Germany applauded Wednesday’s verdict but warned that the fight against right-wing extremism is far from over.

“The Federal Government must take the [neo-Nazi] threat more seriously,” Josef Schuster, head of the Central Council of Jews in Germany, said in a statement following the sentencing of Beate Zschape.

Zschäpe, 43, the only surviving member of the defunct National Socialist Underground, or NSU, was found guilty on 10 counts of murder and sentenced to life in prison. He is unlikely ever to be released on parole.

The NSU killed nine men of migrant background and one policewoman in its 14-year crime spree, which came to a violent end in late 2011. Four NSU supporters were given lesser prison terms in the case.

In his statement, Schuster said he welcomed the clear verdict as a “signal against right-wing extremism.” He also extended his sympathies to the families of the 10 murder victims.

“There must never be another NSU,” Charlotte Knobloch, head of the Jewish community of Munich and its umbrella organization in the state of Bavaria, said in a statement applauding the convictions and sentences.

She called the verdict “a signal that our state is taking defensive action against right-wing extremist acts of violence.”

Zschape’s attorney, Wolfgang Heer, said she will appeal the verdict.

Schuster said “there are still many questions” to be answered about the environment that nurtures a group like NSU.

He warned that Germany’s newly successful right-populist party, the anti-foreigner Alternative for Germany — which entered the Bundestag for the first time in 2017 after winning seats in several state parliaments since 2013 — has given a voice to other, more extremist right-wing groups that would like to use the political system to undermine democracy.