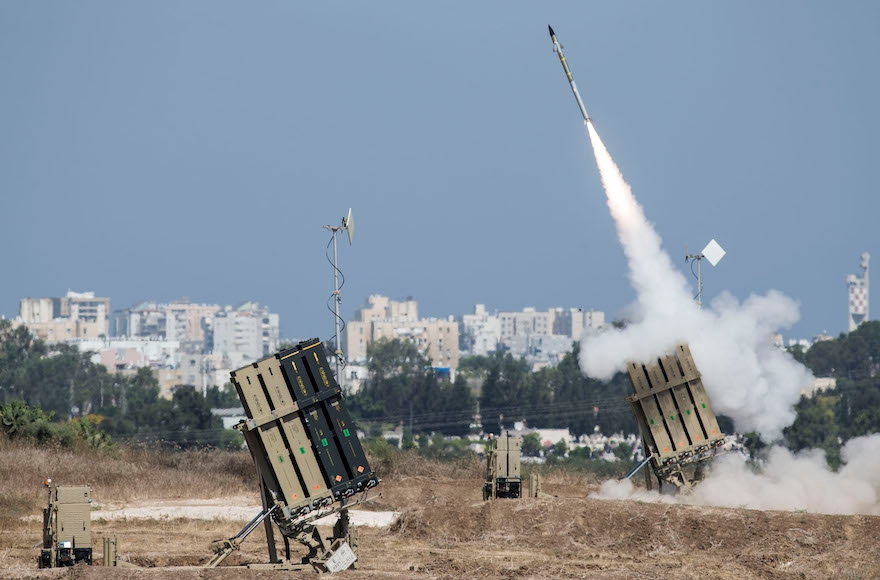 At least four Israelis, a 52-year-old man,his wife, and two daughters, ages 14 and 15, were injured when one of the rockets landed on the roof of their home in the southern Israeli city of Sderot. A second rocket hit a synagogue in Sderot, which was empty at the time.

The Iron Dome missile defense system intercepted at least 30 of the rockets.

In response to the rocket fire, the Israel Defense Forces struck 40 Hamas targets in Gaza, including a high-rise building in the Shati refugee camp in the northern Gaza Strip used as a terror training facility. The IDF said in a statement that it did not bomb the building until its residents were warned and had time to leave. The IDF also bombed weapons manufacturing facilities, warehouses for storing weapons, and training compounds, as well as two terror tunnels, the IDF said in a statement.

“The IDF will intensify its strikes in Gaza if deemed necessary, continue to improve the security situation, and strengthen the sense of security for the residents of southern Israel,” the IDF statement said.

The Palestinian health ministry in Gaza said that two teens were killed in the air strike on the building in the Shati refugee camp.

On Saturday night shortly after the close of Shabbat, Netanyahu said in a statement: “In consultation with the Minister of Defense, the Chief-of-Staff and the top security command of the State of Israel, we have decided on strong action against Hamas terrorism. The IDF has struck Hamas with the hardest blow since Operation Protective Edge and we will increase the strength of our attacks as necessary.”

Operation Protective Edge, also referred to as the 2014 Gaza War was launched against Gaza in July 2014, following the discovery of the bodies of three Israeli teens who had been kidnapped by Palestinian terrorists the previous month, as well as a series of rocket attacks by Hamas on southern Israel after Israeli security officials arrested Palestinian leaders in connection with the kidnapping and murders.

Hamas announced late on Saturday night that it would observe a ceasefire with Israel following negotiations with Egypt and with international organizations.

“The regional and international mediation has led to an end of the current escalation between the resistance and the occupation forces,” Hamas said. Hamas said it would stop firing rockets if Israel stopped its airstrikes on Hamas targets in Gaza.

The IDF said it would match its response to actions emanating from Gaza.

Shortly after midnight on Sunday morning at least two more rockets were fired from Gaza at southern Israeli communities in the Eshkol Regional Council. The IDF responded by striking the launcher in Gaza.

Hamas said that it began firing rockets at Israel after midnight on Saturday morning in response to Israeli attacks Friday night on a Gaza terror tunnel and several sites used to prepare and launch incendiary kites and balloons toward southern Israel which have burned thousands of acres of agricultural fields and woodlands. Israeli said it launched the Friday night attacks in response to violent riots on the border with Gaza during the day Friday, including the injury to an IDF soldier when a hand-grenade was thrown at him during the riots.

Moments ago, IDF fighter jets struck a high-rise building in the Al-Shati refugee camp in northern Gaza. The building was a Hamas training facility. A tunnel was dug under the building & used for underground warfare training. This tunnel is part of a Hamas terror tunnel network pic.twitter.com/M3C53RKMaC