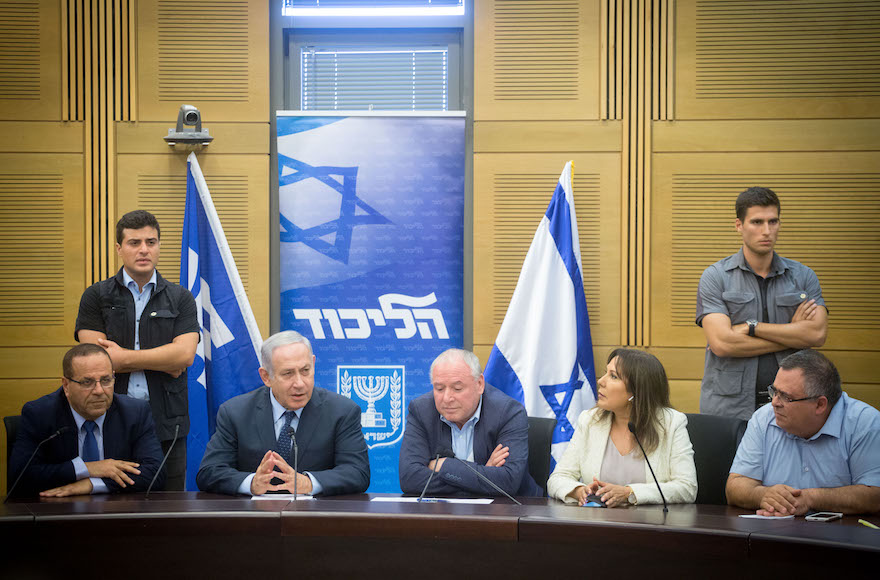 JERUSALEM (JTA) — Israel is debating legislation that supporters say states the obvious. Critics, meanwhile, say the measure will divide Israeli society and damage its relationships with the rest of the democratic world, especially Jews in the United States.

The premise of the so-called Nationality Law is simple: It enshrines in Israel’s quasi-constitutional Basic Law that Israel is the nation-state of the Jewish people. But after that it gets more complicated.

Much of the bill, sponsored by Prime Minister Benjamin Netanyahu’s Likud party, deals with obvious signs that Israel is a Jewish state, such as affirming the symbols on the flag and shield, setting the Hebrew calendar as the country’s official calendar, recognizing Jewish holidays and days of remembrance, and naming Jerusalem as the capital.

Other parts of the law, however, have raised the hackles of segments of Israeli society and the Jewish Diaspora. These include clauses relegating Arabic to a “special” status instead of an official language, promoting the establishment of Jewish communities throughout Israel and addressing the state’s relationship with Diaspora Jewry. That the words “democracy” and “equality” do not appear once in the text have sounded alarm bells among its critics.

Israel’s president, Reuven Rivlin, called the law a “weapon (for) our enemies.” Outgoing Jewish Agency head Natan Sharansky said it would end up “driving a wedge between Jews in Israel and in the Diaspora.” And thousands of Israeli protesters, Jewish and Arab, marched through Tel Aviv over the weekend to protest discriminatory aspects of the legislation.

In the 11th hour before the Knesset was to vote on the legislation — it is expected to pass — a leader of American Jewry flew to Israel and spent nearly two days discussing the bill and criticizing it face to face with Israeli lawmakers.

Jerry Silverman, president and CEO of the Jewish Federations of North America, told JTA on Monday that the Nationality Law “took over the agenda” of his trip. Prior to leaving for Israel, he spoke to the major Jewish organizations about their concerns over the legislation. While he was not permitted to address the Knesset joint committee working to massage the language of the legislation before it comes to the plenum for a vote sometime this week, Silverman said he sat in on the meetings and was recognized publicly as a representative of Diaspora Jewry.

He said he discussed the concerns of American Jewry with many lawmakers and key members of the Knesset, as well as the Prime Minister’s Office.

Silverman told JTA he is concerned that the legislation, with its focus on the Jewish aspects of Israel, will alienate young American Jews who are “so social-justice conscious today.” He said there are several parts of the legislation that “American Jews would struggle with.”

Changing the status of the Arabic language is being seen as “discriminatory,” according to Silverman. Arabs make up about 20 percent of Israel’s population.

A section stating that Israel is responsible for preserving the connection of Israel with worldwide Jewry also has drawn criticism. Critics fear it is worded in such a way as to weaken the ability of Jews in the Diaspora, and even in Israel, to promote pluralism inside the Jewish state or petition the Supreme Court in Israel to hear cases on issues that affect Diaspora Jewry, such as the establishment of the egalitarian prayer section of the Western Wall.

The previous wording of the clause would have “emboldened and given a lot of fuel to the BDS movement,” Silverman said, echoing the statements of many on social media and even in the halls of the Knesset. Some, especially Arab Israelis and their supporters, have used the word “apartheid” to describe the provision.

The author of the original Nationality Law nearly a decade ago — Avraham Diskin, a political scientist and Hebrew University professor — rejects criticism of the legislation, which he calls “declarative” and “without a lot of practical” consequences.

Diskin told JTA that it is “high time” for a Basic Law that specifically identifies Israel as a Jewish state, in addition to the many Israeli laws that mention Judaism and the Jewish character of the state.

There are “many people around the world outside of Israel, mainly Arabs, who are not ready to accept allowing the Jews to have their own nation state,” Diskin said. He added that in Israel, some challenge the notion of Israel as a Jewish state — Jews among them.

Diskin said the law is most needed, however, because of the Israeli Supreme Court. He and other critics of the high court say it has ignored the Jewishness of the state, for example in cases of Palestinian residency rights in Israel, rights of foreign converts to citizenship, land purchases by the Jewish National Fund, draft deferments to haredi Orthodox youth and the deportation of illegal migrants.

Diskin said there is nothing in the legislation that violates human rights or the rights of minorities.

Amir Fuchs, a researcher at the Israel Democracy Institute, said the legislation resembles the preamble of an as-yet unwritten Constitution, and that “there is no [democratic] country in the world that has not specifically enumerated the right of equality in its constitution.” The legislation has “no clear statement that the state will have equal rights for all its citizens,” he told JTA.

“This is what is missing. This is the problem,” Fuchs said.

Fuchs, who heads the Defending Democratic Values Program at the Israel Democracy Institute, said there is no need for the new legislation since it is clear that Israel is a Jewish nation-state based on its symbols, language and holidays, among other things.

He said he does not oppose the idea of a law stating that Israel is the nation-state of the Jewish people, but that such a law should also ensure that the state will have equal rights for all its citizens.

But Fuchs does not believe that Israel will look substantially different after the passage of the legislation and disagrees with those who say it will turn the country into an apartheid state. The tipping point, he said, will be in close Supreme Court decisions, where the “Jewish” element could take precedence over the “democratic”element.

The legislation is set to come up for a final vote before the end of the Knesset’s summer session on Sunday. The coalition has enough votes for passage because the haredi Orthodox parties are willing to support it. The haredi parties in the past have opposed the legislation due to its nationalist nature.  But the addition of the word “religious” to a clause on the right to self-determination in part softened their stance.

Silverman said that as a sovereign state, Israel has the right to pass such legislation. The Israeli and the American Jewish community are “pretty young environments for the two major Jewish communities in the world. And we are both going through growing pains.”

Jewish organizations in the United States will be watching to see how the law is applied practically, particularly in cases involving Diaspora Jewry.

“Israel has to be the nation-state for all Jews,” Silverman said. “That cannot be limited in any way.”