Alexandria Ocasio-Cortez criticizes Israel for ‘the occupation of Palestine’ 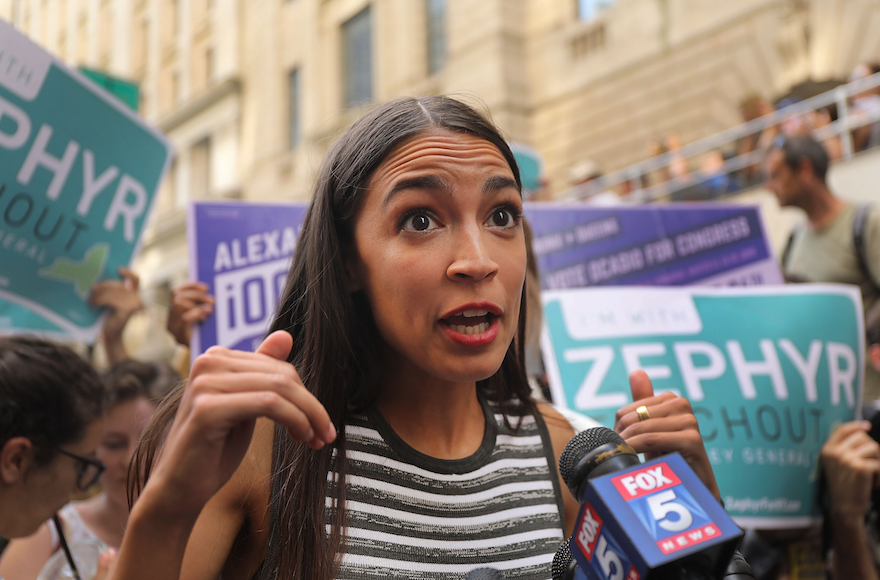 Appearing July 13 on PBS’s “Firing Line,” Ocasio-Cortez, 28, also described herself as “a firm believer in finding a two-state solution” to the Israeli-Palestinian conflict.

Ocasio-Cortez, a member of the Democratic Socialists of America, upset 10-term incumbent Joe Crowley in last month’s primary in New York’s 14th Congressional District, which straddles Queens and the Bronx. Although she has commented infrequently on foreign affairs, in May she called the killing of Palestinian protesters by Israeli troops at the Gaza fence a “massacre.”

On “Firing Line,” host Margaret Hoover asked Ocasio-Cortez “What is your position on Israel?” Ocasio-Cortez responded, “I believe absolutely in Israel’s right to exist.” She added: “I am a proponent of a two-state solution.” The candidate said her previous position on the Gaza clashes “is not a referendum on the State of Israel.”

“Of course the dynamics there, in terms of geopolitics … is very different than people expressing their First Amendment right to protest,” Hoover replied.

Israel and its supporters have noted that among those killed in Gaza were members of the Hamas terrorist group, which encouraged its followers to breach the border fence. Hamas has acknowledged that at that May demonstration, 50 of the 61 killed were its members.

“Yes,” Ocasio-Cortez conceded, adding, “But I also think that what people are starting to see at least in the occupation … of Palestine [is] just an increasing crisis of humanitarian condition and that to me is just where I tend to come from on this issue.”

When Hoover, a former aide to President George W. Bush, asked Ocasio-Cortez to clarify what she meant, Ocasio-Cortez paused and answered: “I think what I meant is like the settlements that are increasing in some of these areas in places where Palestinians are experiencing difficulty in access to their housing and homes.”

After Hoover asked Ocasio-Cortez to expand on her comments, the candidate said: “I am not the expert on geopolitics on this issue,” and “I just look at things through a human rights lens and I may not use the right words … Middle Eastern politics is not exactly at my kitchen table every night.”

Her comments on Israel have prompted criticism from the right and left.

“Alexandria Ocasio-Cortez is doing a great service. Her argument is twofold: Israel a colonizing occupier of Palestine, and that she doesn’t know anything about the conflict,” wrote Seth Mandel, op-ed editor of the New York Post, on Twitter. “Accurate: those who think this have no idea what they’re talking about. At least she’s honest.”

The Republican Jewish Coalition tweeted: “Alexandria Ocasio-Cortez bashes Israel while admitting she is clueless about what is going on there. She simply toes the far-left, radical agenda. Elected Democrats are endorsing this when they endorse her.”

Asad Abukhalil, a professor in political science at California State University, Stanislaus, lamented that Ocasio-Cortez’s comments about a two-state solution and support for Israel’s right to exist are “a sign that you have become an already mainstream Democratic candidate.”

Although the Democratic Socialists of America endorses the Boycott, Divestment and Sanctions movement, Ocasio-Cortez has not discussed her position on the boycott.

Tom Perez, the chairman of the Democratic National Committee, has called Ocasio-Cortez the “future of our party.”