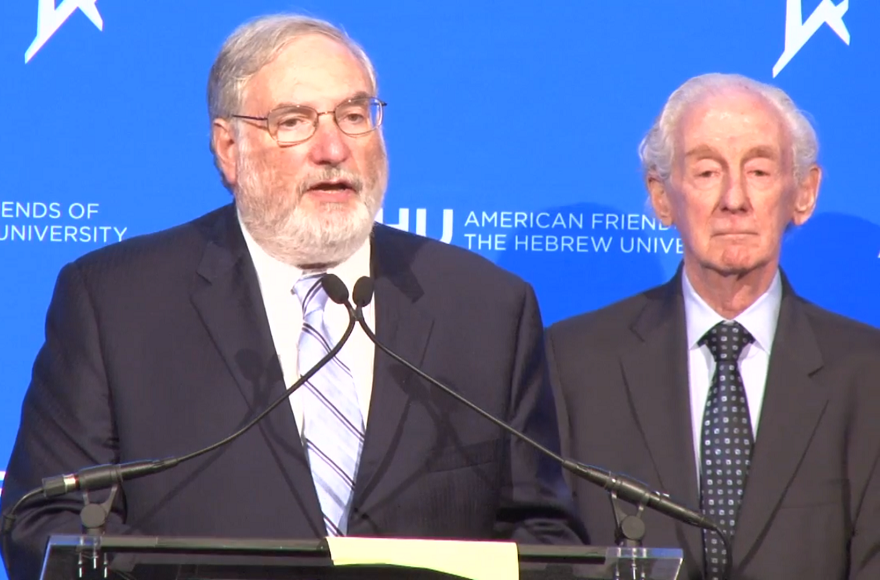 Meyer Koplow, left, accepting an award from American Friends of The Hebrew University in 2016. (Screenshot from YouTube)
Advertisement

NEW YORK (JTA) — A prominent Jewish philanthropist says he was aggressively questioned by Israeli airport security after going on a Jewish tour of Palestinian areas of the West Bank.

Meyer Koplow, chair of Brandeis University’s board of trustees and a longtime donor to pro-Israel causes, was delayed for 30 minutes by a security agent at Ben Gurion International Airport Sunday before being allowed to board his flight. Koplow’s visit to Israel included a trip to the West Bank with Encounter Programs, a nonpartisan organization that brings Jews to Palestinian areas to meet Palestinians and see their society firsthand.

He believes he was called for questioning after security personnel found a brochure in his luggage titled “This Week in Palestine,” which he had picked up in a Bethlehem hotel lobby. Agents had placed a note in the same pocket of his luggage informing him that the bag “was opened for the purpose of carrying out a security check.”

Koplow was questioned by a security agent for 10 minutes in the departure hall, after which he was told to wait and eventually allowed to board his flight.

“The best way I can describe it is a badgering form of questioning where before you finish giving one answer, you’re being asked the same question again as if what you said is not credible,” Koplow told JTA. “She asked what purpose could possibly be served by people visiting the territories. She asked that several times.”

(Full disclosure: This reporter was a participant on the same Encounter tour that Koplow attended last week. Participants left Israel separately, and this reporter was not at the airport while Koplow was questioned.)

Koplow said he appreciates Israeli personnel checking luggage for the purposes of security, but he feels that the questioning he experienced “goes a level beyond that.”

“I applaud the careful security, including examining people’s luggage,” he told JTA. “But not for materials that they’re taking with them out of the country that aren’t in the nature of what you would call classified materials. Why would you do that other than to send a message that the government doesn’t welcome your engaging in any kind of inquiry.”

Koplow was disturbed as well by “the manner of the continued implication that I wasn’t telling the truth or all of the truth,” he said. He added that describing his past involvement with Jewish and Israeli causes did not change the tenor of the interrogation, which was conducted in public view.

In addition to his position at Brandeis, Koplow is a board member of the UJA-Federation in New York and has served as the president of his synagogue, Young Israel of New Rochelle. He told JTA that he has given millions of dollars to Israeli causes.

“The most disturbing question she asked me, and she asked me more than once, was what was I going to do with the information I learned in the territories,” Koplow said. “What business is it of security at departure as to what I’m thinking or what I might say?”

Koplow subsequently spoke with Dani Dayan, Israel’s consul general in New York, who apologized for the incident while justifying the questioning on security grounds.

“We intend to continue with a clean sheet even if it means paying a price on other fronts,” Dayan wrote in an email to Koplow on Tuesday. “That price includes sometimes our image being damaged. The total and complete security of our aviation and its passengers is and will continue to be our first priority. All other considerations are subordinated to that.”

But Dayan wrote he regretted how Koplow was treated.

“I wish to express once more my sorrow for the inconvenience and embarrassment caused to you,” he wrote. “I hope your next departure from Ben Gurion Airport will be more pleasant.”

Koplow told JTA that the incident will not deter him from visiting or engaging with Israel in the future.

His story first appeared in a Twitter thread about the incident written by his son, Michael Koplow, policy director at the Israel Policy Forum, a group that advocates for a two-state solution to the Israeli-Palestinian conflict. The younger Koplow wrote that his father’s story “is a perfectly sad microcosm of everything wrong with the way Israel treats information as a threat and American Jews as objects of suspicion.”