In Israel, Hungary’s Orban gets praise from Netanyahu and protests at Yad Vashem 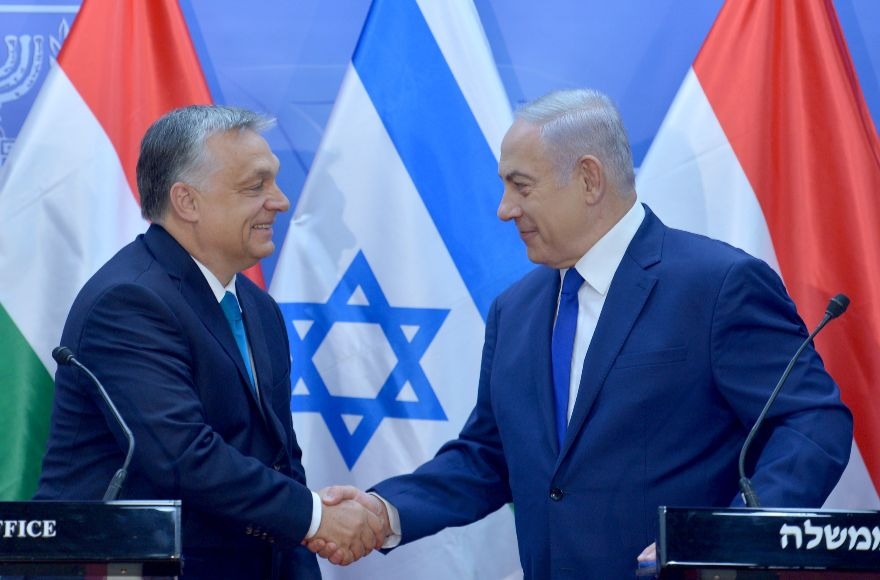 JERUSALEM (JTA) — Prime Minister Benjamin Netanyahu thanked his Hungarian counterpart, Viktor Orban, for defending Israel in international forums and for being a “good friend” to his country.

Netanyahu made his remarks before the leaders met Thursday in Jerusalem on the second day of Orban’s two-day visit. Netanyahu went to Hungary a year ago.

Meanwhile, later in the day, dozens of protesters prevented Orban’s car from moving for several minutes following a visit to the Yad Vashem Holocaust Memorial and Museum. The protesters held signs reading “Never again” in Hungarian and Hebrew and shouted “Shame on you,” The Times of Israel reported.

Netanyahu has been criticized for hosting Orban, an authoritarian who heads the far-right Fidesz party, with some citing his campaign against the Hungarian-American philanthropist George Soros that many consider obliquely anti-Semitic.

Orban also angered Jews both in and out of Hungary when he praised Miklos Horthy, who led the country following the disintegration of the Austro-Hungarian Empire after World War I. Horthy was a Hitler ally who oversaw the murder of more than 500,000 Holocaust victims together with Nazi Germany.

Netanyahu noted that Hungary sponsored a statement in the United Nations Human Rights Council condemning anti-Semitism and inaugurated the renovated synagogue in Subotica after allocating millions of dollars to renovate Jewish houses of worship.

“In Hungary there is no tolerance for anti-Semitism, and all of the Jewish citizens in Hungary are under the protection of the government,” Orban told reporters before the start of the meeting. “We are proud that in Hungary, self-identifying Jews who celebrate and preserve Jewish tradition can feel safe.”

After meeting with Netanyahu, Orban met with President Reuven Rivlin in Jerusalem.

“I know what you are doing against anti-Semitism. I know the efforts,” Rivlin told Orban during the meeting. “But we have to remember, when we say ‘Never again’ — neo-fascism and neo-fascist groups are a real danger to the very existence of the free world.”

Orban is not scheduled to meet with any Palestinian leaders during his visit.

At Yad Vashem, Orban laid a wreath in the Hall of Remembrance. Later, police removed the protesters who had detained the Hungarian leader. The protesters had also chided Yad Vashem for hosting Orban.