For families of Jews with disabilities, Shabbaton retreats provide respite and support 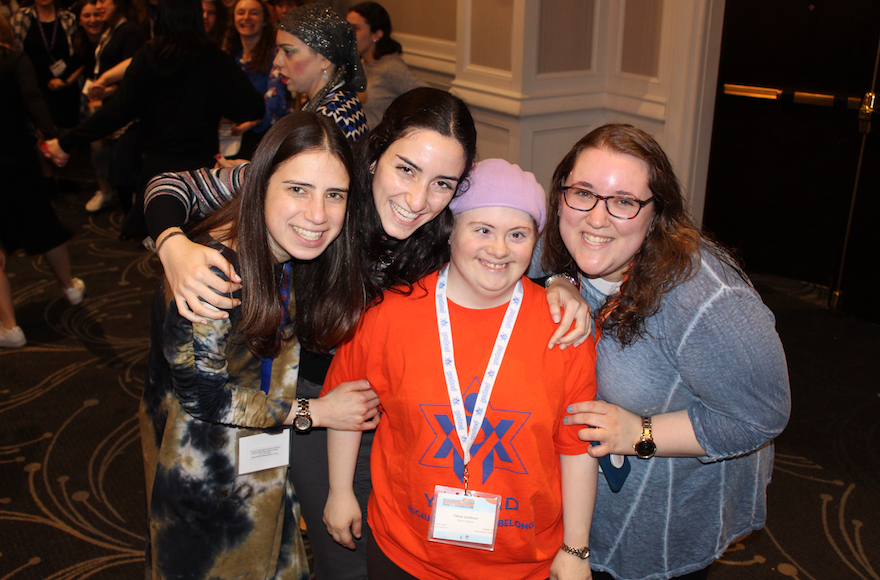 The Shabbatons organized by Yachad offer fun activities for those with disabilities and their siblings, and educational workshops and networking opportunities for parents. (Yachad)
Advertisement

Shmuel and Rivka have a 3-year-old son, Moshe, with Down syndrome. As Hasidim who live in Borough Park, Brooklyn, they have struggled with how to explain their child’s special needs to others in their community.

When an opportunity came up to attend a weekend retreat for Jewish families with family members who have disabilities, they weren’t sure what to expect and were nervous about going.

“But once we arrived, we met many other parents and quickly became good friends,” said Shmuel, who asked that his last name be withheld for privacy. “We needed a change of scenery with our family from the daily stresses of caring for Moshe. And we realized that every family we met had their own unique challenges — some more than others — and we could all gain from each other’s approach and ideas.”

The retreat, held in Stamford, Connecticut, was organized by Yachad, The National Jewish Council for Disabilities, which operates under the auspices of the Orthodox Union. Held throughout the year in regions across the country, the Yachad weekends, or Shabbatons, are meant to provide relief, camaraderie and support for families who have children with disabilities.

There were educational workshops and networking opportunities for parents at the Connecticut retreat, including sessions focused on everything from developing resilience to spotting “triggers” for children with special needs to tips about getting government and financial support.

Simultaneously, individuals with special needs and their siblings participated in activities like ice breakers and team-building games. The 1,000-plus participants came from both Orthodox and non-Orthodox backgrounds. Everybody came together for meals, prayer services, a Saturday night music concert and a Sunday morning bubble show.

“The purpose of Yachad is to promote the inclusion of persons with disabilities, and their families, in all the different aspects of Jewish life,” said Rabbi Ahron Rosenthal, Yachad’s New York director.

“At the Shabbatons, professionals talk to parents about care and support of the child with special needs and how to manage those needs. There is a great need for such programs.”

Shmuel said he was particularly gratified to see his other children discover the world of inclusion.

“My other children saw that there’s a whole world out there for children with special needs,” he said. “We got such ‘chizuk’ [strength] and appreciation for our lot in life on this Shabbaton from the lectures and, even more so, from other parents we schmoozed with.”

Yachad — Hebrew for inclusion or togetherness — began about 30 years ago, when the Orthodox Union realized there was a dire need for programs for Jewish children with special needs and their families.

“When Yachad started it was truly revolutionary,” said Dr. Jeffrey Lichtman, Yachad’s international director and a psychologist. “People were not aware of Jews with disabilities. They were often sent to programs far away and were not included in communal life – in shuls, schools, businesses. There was very little interaction.”

The social recreational programs with which Yachad launched remain core to its mission. From the outset, those programs sought to include both special-needs individuals and their mainstream peers. Today the organization runs everything from summer camps to employment programs for adults with disabilities.

It also educates and trains synagogue and youth leaders about inclusion. The Connecticut retreat included a leadership program for some 30 able-bodied eighth-graders nominated by their schools to receive leadership training and hands-on opportunities to engage with individuals with disabilities.

Saadya Ehrenpreis, a 34-year-old with Down syndrome, has been to many Yachad Shabbatons and activities, including vocational training and summer camps. But until three years ago, his mother had never joined him at a retreat for families. Ahava Ehrenpreis was concerned that it would be too overwhelming for her.

But she finally gave in, and found the weekend helpful and enjoyable. To date, she has gone on three retreats.

“It’s a warm, very relaxed, upbeat atmosphere,” Ahava said. “It’s also been very lovely to meet and give faces to the Yachad staff, who I usually see only as email addresses. The mentors are enthusiastic, caring young people whose joy and affection for the Yachad members is palpable. What parent does not want to see that up close and personal?”

She credited a Shabbaton last year with transforming Saadya’s life because she learned of a new program for adults with special needs that was opening at Yeshiva University. Saadya ended up enrolling in the program, called the Makor College Experience, which provides opportunities for individuals with intellectual disabilities to experience college life, explore interests and develop skills as they transition into independence.

One of the greatest challenges for individuals who have disabilities is attaining jobs as adults, according to Lichtman. The problem isn’t so much limitations to their abilities, he said, as it is employers who can’t see beyond their disabilities.

“Too often people with disabilities are rejected because employers think they can’t do something or they won’t,” Lichtman said. “But more often than not they can and they will, if given the chance.”

Individuals in Yachad’s vocational program start by getting a work placement according to their skills and interests. An onsite job coach helps them acclimate to the environment and the work. Participants gradually progress to the point where they no longer need the job coach.

“A common thread with them is that they are so dependable,” said Hillel Tuchman, who has employed three Yachad-affiliated individuals at the Atlantic Freight Brokers Corp. in Brooklyn. “Once they are set up there is rarely an issue. I know if we give them something to do they will get it done.”