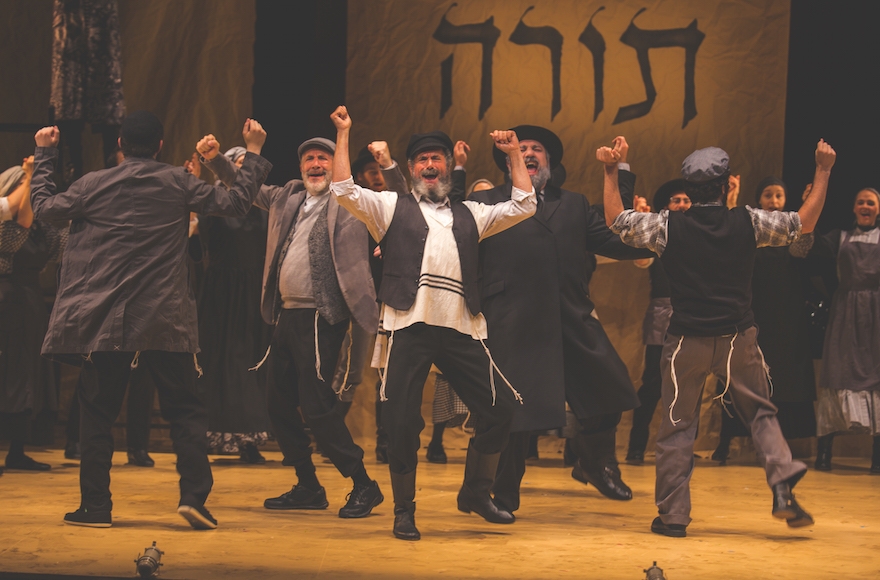 NEW YORK (JTA) — The National Yiddish Theatre Folksbiene’s new production of “Fiddler on the Roof” enacts a familiar story in an unfamiliar language. The actors sing about joy and hardship, and argue about the importance of tradition, in the language their characters would have spoken in the Old Country.

But before rehearsals started in June, the majority of them had no experience with the language. Of the 26 cast members, only three spoke Yiddish fluently. Another nine had some experience with the mama loshen, but everyone had just a month to memorize the entire script.

The result is extraordinary, giving audience members a new experience and new understanding of one of Broadway’s best-loved musicals. (For those who don’t speak Yiddish, there are supertitles in English and Russian.)

This production of “Fiddler on the Roof” — or “Fidler Afn Dakh” — marks the first time the musical is being performed in Yiddish in the United States, and only the second time in its history (a Yiddish version ran for about four weeks in Israel in 1965), according to the New York-based theater company.

“Fiddler on the Roof,” which premiered in 1964, is based on “Tevye and His Daughters,” a series of stories by the Yiddish writer Sholem Aleichem. Created by Jerry Bock, Sheldon Harnick and Joseph Stein, the musical tells the story of a poor dairy farmer living in the Russian town of Anatevka at the start of the 20th century as he grapples with tradition and the ways his daughters choose to defy it. 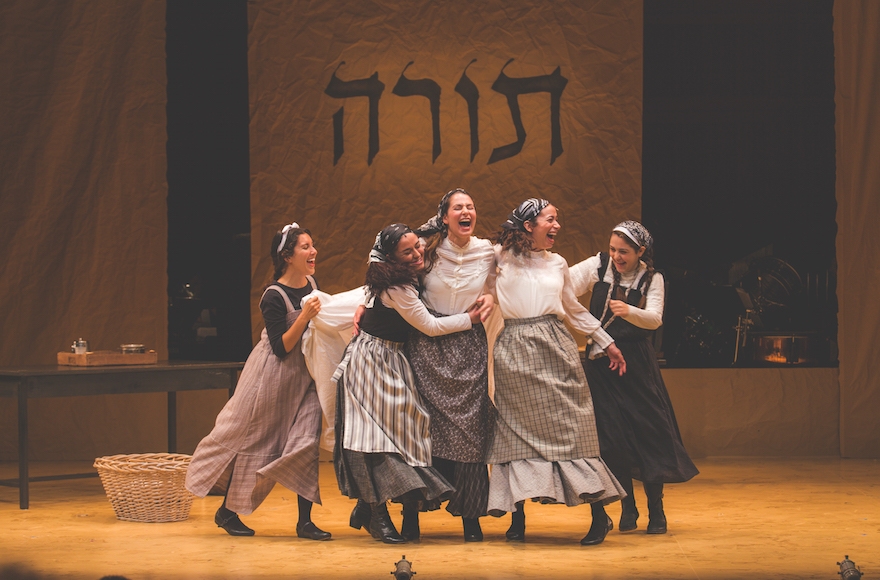 As part of the auditions for Folksbiene’s production, actors had to prove that they would be able to learn Yiddish quickly. Those called in for auditions were given 24 hours to memorize a recording of a song in the language. From the 2,500 applications, 26 actors were chosen for the production.

Once the cast was chosen, each member received a recording of his or her lines and songs in Yiddish in addition to private language coaching.

“It was very tedious, and it continues every day,” Zalmen Mlotek, Folksbiene’s artistic director, told JTA. “We give little notes here and there because while they know what they’re saying, of course sometimes the accent isn’t quite right.”

Members of the cast include Emmy Award nominee Jackie Hoffman playing the matchmaker Yente and Broadway actors Steven Skybell as the long-suffering Tevye and Mary Illes as his wife, Golde. Award-winning director and actor Joel Grey directs the production, which runs through Sept. 2 at the Museum of Jewish Heritage in downtown Manhattan.

The team used a translation by Shraga Friedman, the actor and director who translated the script for and co-directed the Israeli production. Performing the show in Yiddish hearkens back to Sholem Aleichem’s original stories, said Folksbiene CEO Christopher Massimine. But it does much more.

Perhaps the biggest difference, according to Massimine, is that the word “tradition” has been replaced by “Torah.” Though a Yiddish word for tradition is used in the iconic song “Tradition,” Torah is used elsewhere. That raises the stakes for characters like Tevye, for whom Torah is not mere custom but represents the ultimate authority: God’s law.

“A tradition can start one way and end up another way,” Massimine told JTA. “You can argue with the tradition because it’s not something that is set in stone — but law is.”

Folksbiene, the world’s oldest continuously operating Yiddish theater, was able to acquire Friedman’s director’s notes, which helped shed light on his translation and how the changes sometimes shift the play’s meaning. 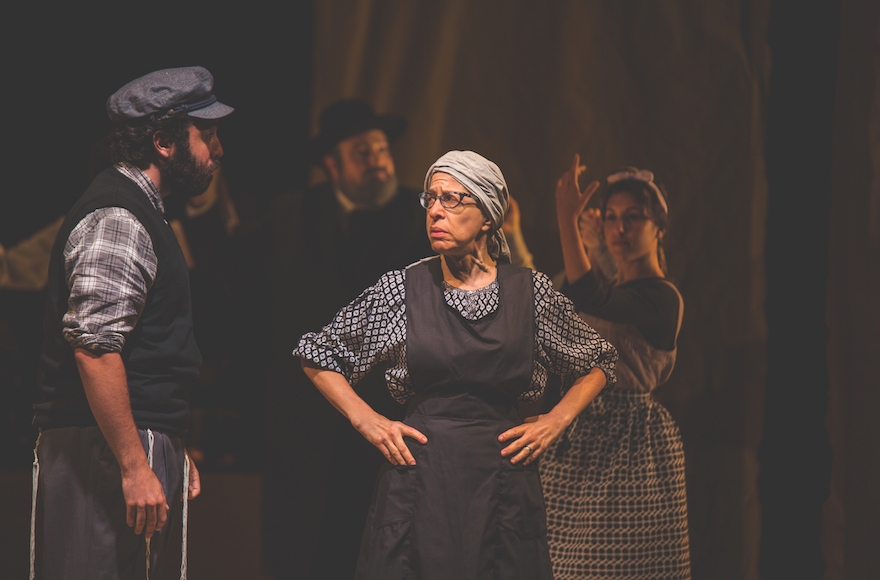 Kirk Geritano, left, and Jackie Hoffman in a scene from the Folksbiene’s “Fiddler on the Roof.” (Victor Nechay/ProperPix)

One such instance is at the end of the play, when the Russian government orders Jews to leave Anatevka. While Tevye, his wife and two of his daughters head to America, another daughter, Tsaytl, and her husband say they are leaving not for Poland, as in the original production, but specifically the city of Warsaw.

To a modern audience the mention of the city, which was home to the largest Jewish ghetto in Europe during World War II, is likely to bring memories of the Holocaust.

“That being said in Yiddish, it brings it all full circle,” Massimine said.

Friedman made other choices to preserve the rhyme scheme: “If I Were a Rich Man” becomes “Ven Ikh Bin a Rothschild” (If I were a Rothschild), which is also the name of another story by Sholem Aleichem.

With a $750,000 budget, the show is Folksbiene’s largest and most expensive production. Massimine says the show has already earned back its production costs in ticket sales.

Regarding the supertitles, Mlotek said, “We have a significant amount of Russian-speaking Jews whose English isn’t the best, so there’s a population that we wanted to serve.” He said he wanted to add additional languages but the technology did not allow for it.

In addition to showing Tevye and his family speaking in what would have been their historic language, the production makes a point about Yiddish and its state today.

“It’s also a portrait of the initial decline of Yiddish and why that happened,” Massimine said, “and why it’s important that we treasure this language and this culture.”