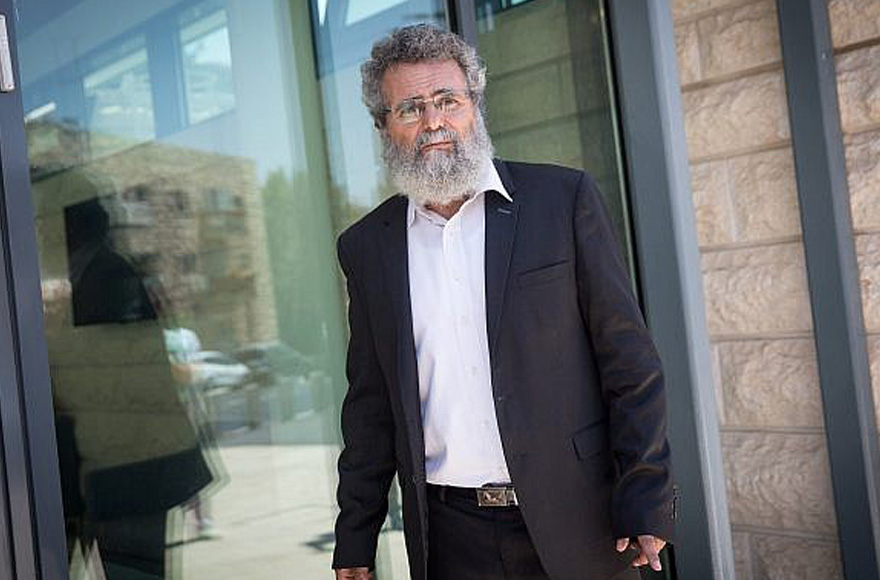 (JTA) — As he waited to be interrogated by the Israel Police for conducting a non-Orthodox wedding, Rabbi Dov Haiyun began a Facebook post with three words: “Iran is here.”

Haiyun awoke at 5:30 a.m. Thursday at his home in Haifa to a knock on the door from two police officers who detained him, put him in the back of a van and sought to question him. His crime? Conducting a Jewish wedding outside the auspices of Israel’s haredi Orthodox Chief Rabbinate.

The rabbi was released, sans questions, after a couple hours — he had to head to the Israeli president’s residence for an event celebrating Jewish pluralism.

Israel’s attorney general has since ordered police to stop investigating Haiyun, a Conservative rabbi in his northern city. But news of the incident, which has spread quickly across Israel and to Jews worldwide, has highlighted an obscure law threatening non-Orthodox rabbis with arrest. And it has ignited a wave of protest in Israel and abroad against the Orthodox monopoly over Jewish practice there.

“I feel disappointed in my state that this is what’s happening in my country,” Haiyun told JTA on Friday. “The only country that discriminates between Jews in the entire Western world is Israel. In the United States, I can perform weddings and they recognize me.

“The police don’t catch criminals this quickly,” he added later.

The law that landed Haiyun in a police van outlaws any traditional Jewish marriage performed outside the authority of the Chief Rabbinate, the state-sanctioned body dominated by haredi Orthodox rabbis that controls all recognized Jewish marriage, divorce, burial and conversion in Israel. Weddings performed in Israel outside its purview — including all Conservative and Reform marriages — are not recognized by the state.

According to the law, rabbis that perform any non-sanctioned weddings in Israel could also be subject to prosecution — so can the bride and groom. When the measure was passed in 2013, a Chief Rabbinate spokesman told JTA that non-Orthodox weddings would only run afoul of the law if they were performed using traditional Jewish rites. Haiyun uses a traditional Jewish ceremony in his weddings, so a religious court in Haifa invoked the law and ordered the police to interrogate him.

(Earlier reports that one of the partners in the marriage was a “mamzer” — an individual who was born out of a woman’s extramarital affair and whose ability to marry within Jewish law is highly restricted — appear to be inaccurate.)

Before this week, the law was never enforced. So though secular Israelis have long chafed at their inability to marry whomever they wanted or how they wanted, the law had not become a centerpiece of protests against the Chief Rabbinate. Campaigns have focused more on instituting civil marriage in Israel or on increased rights for LGBT Israelis.

Some Israelis have also protested the Chief Rabbinate by declining its wedding services. Israel does recognize any legal wedding ceremony performed abroad, so some Israelis are legally married in a nearby country — say, Cyprus — and then have an unrecognized ceremony in Israel. Some secular Israelis forgo marriage altogether and live in domestic partnership. That Israeli Jews have the right to marry however they want only outside their own country is a frequently noted irony.

Alternative weddings have become so widespread that Israel’s own Foreign Ministry posted a Facebook video last month advertising them. Against an upbeat soundtrack, the video claims ironically that if you get married in Israel, you can “make it your own style.”

But Haiyun’s experience shows that the wrong kind of Jewish practice can still lead to a morning in the police station. His detainment — and his Facebook post comparing it to Iran’s Islamic theocracy — has led to a street protest. Israelis have also begun an online campaign overlaying their Facebook photos with the message “I also got married outside the rabbinate.”

The incident has prompted vociferous protest from Jews outside Israel, including an angry statement signed by 14 Conservative Jewish groups. The Conference of Presidents of Major American Jewish Organizations, an umbrella group rarely given to criticizing Israel, issued a statement urging an investigation of Haiyun’s early morning detention (although without criticizing the law itself).

UJA-Federation of New York, the country’s largest and most powerful Jewish federation, called Haiyun’s detention “dramatically inconsistent with Israel’s promise as the home of the entire Jewish people.”

Even the American Federation of Teachers felt compelled to weigh in. The president of the union, Randi Weingarten, who is married to a rabbi, condemned Haiyun’s detention as one of a series of “anti-democratic and nativist actions” in Israel.

Weingarten’s statement also refers to other developments this week that together with the Haiyun incident were the heat, oxygen and fuel of a fiery argument between Israel’s right-wing government and the largely liberal Diaspora.

The day before, Israel’s Knesset passed the so-called Nation-State Law, which officially defines Israel as a Jewish state and has prompted fears in the Diaspora that disrespect for religious pluralism in Israel will be enshrined in law.

Also Wednesday, the Knesset passed a law denying same-sex male couples the right to have a child via a surrogate in Israel.

“I believe in Zionism and believe in its vision, and what concerns me is how far away from that vision the country, under its current government, is headed,” Rabbi Steven Wernick, CEO of the United Synagogue of Conservative Judaism, told JTA, though he did not explicitly refer to the laws passed Wednesday. “But governments don’t last forever.”

Haiyun says he isn’t worried that this will deter other couples from seeking non-Orthodox weddings. In the day-and-a-half since he was detained, he’s received a number of requests to perform weddings. He knows of other couples who have sent their names into local police stations confessing to their non-Chief Rabbinate weddings.