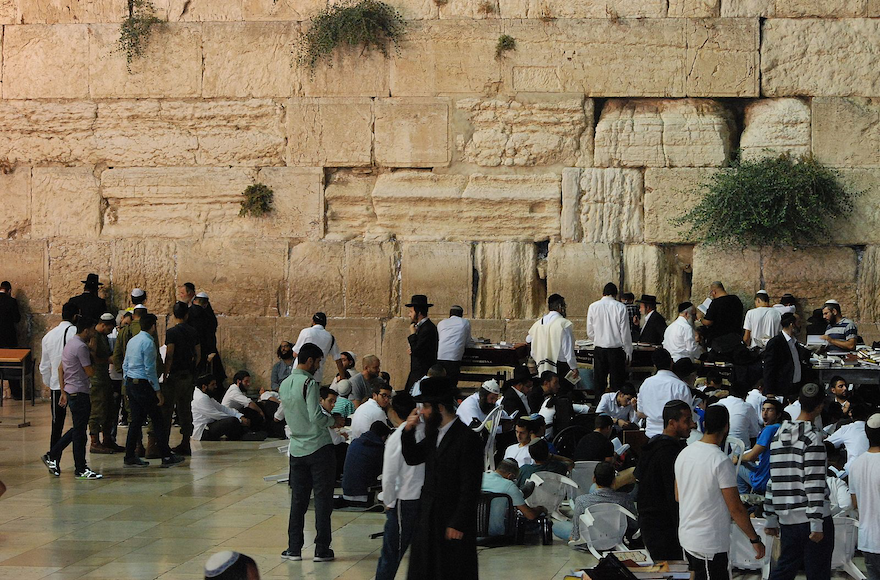 JERUSALEM (JTA) — The Tisha b’Av fast marking the destruction of the two Temples in Jerusalem is just another day for over half of Israeli Jews, according to a new study.

Meanwhile, the 200,000 Jews who report visiting the Western Wall during the day of mourning are almost exclusively religious ones from the national-religious and haredi Orthodox camps, according to the survey by the Jerusalem-based Jewish People Policy Institute. That’s 4 percent of Israeli Jews.

The number of secular Jews who visit the holy site on that day “approaches zero,” according to the study.

Camil Fuchs, who conducted the study, further reported that “those who think of Tisha b’Av as a national day of mourning may change their minds when they compare the data about Tisha b’Av with those of other national days of mourning.”

According to the report, more than half of Israelis see Tisha b’Av as just another day on the calendar. This stands in stark contrast to other national days of mourning like Yom Hashoah or Yom Hazikaron, where “only a small percentage of Jews (9 percent and 5 percent respectively, most of them haredi) claim they are just regular days.”

Yom Hashoah, or Holocaust Remembrance Day, and Yom Hazikaron, the memorial day for fallen soldiers and terror victims, were instituted after the founding of Israel. Tisha b’Av is a solemn day on the traditional Jewish calendar marking the fall of the Temples and other historical tragedies. It begins this year at sundown Saturday.

The Western Wall in Jerusalem braces the Temple Mount where the last Temple stood before its destruction by the Romans in 70 C.E.

Although far fewer people fast on Tisha b’Av than on Yom Kippur, a day on which fasting is relatively widespread, more than a third of Israelis reported abstaining from food. A further 6 percent fast for only part of the day and 2 percent avoid food but continue drinking.

According to the Forward, a political battle has been brewing in Tel Aviv between a former city councilman pushing for restaurants to remain closed on Tisha b’Av and a current member of the council encouraging their owners to post stickers in their windows declaring that they will remain open on the fast. Israeli religious freedom campaigners have expressed skepticism regarding the fight.

“There’s not a big ideology behind it,” Mickey Gitzen, executive director of the New Israel Fund, told the Forward. “It provides a lot of attention. It’s very extreme … I oppose both of them. There is no need for both actions. It’s a big ado about nothing. There are many other good reasons to fight, but this is not an issue.”