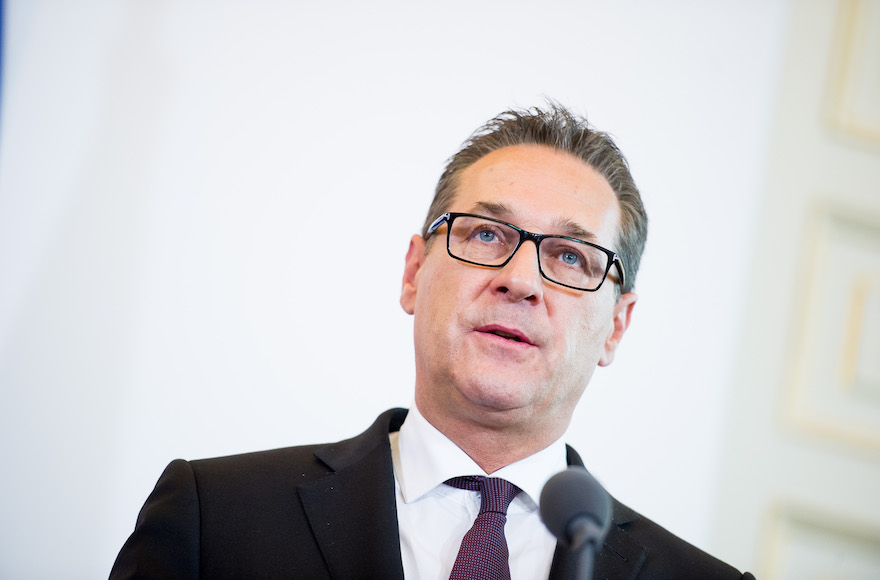 VIENNA, AUSTRIA - JULY 05: Austrian Chancellor Sebastian Kurz (not pictured), German Interior Minister Horst Seehofer (not pictured) and Austrian Vice-Chancellor Heinz-Christian Strache speak to the media after their meeting at the Federal Chancellery on July 5, 2018 in Vienna, Austria. Seehoher is in Vienna to discuss the implementation of his plans for new immigration measures on the German-Austrian border that will require the cooperation of Austrian authorities. (Photo by Michael Gruber/Getty Images)
Advertisement

(JTA) — Austria’s vice chancellor has called for a ban on ritual slaughter in the country, including Jewish shechitah.

Heinz-Christian Strache, the nation’s interior minister and head of the far-right Freedom Party, in a Facebook post Monday said animals should be stunned before slaughter, which is prohibited for both Jewish kosher and Muslim halal meat.

“Slaughter is in many cases contrary to animal rights,” he wrote. “Slaughter should generally be prohibited without prior stunning. As in other EU countries, too. And animals are not a thing either, but protected creatures that cannot be tortured.”

The post included a link to an article in German that listed several European Union states that have made ritual slaughter illegal in recent years, including Denmark, Poland, Switzerland and the Netherlands.

He included in a comment below his post: “There are still some improvements that can be made in animal welfare. This is an issue I want to push ahead.”

Comments on the post took shots at Judaism and Islam for not allowing stunning.

“We should give people with faith the signal that there are limits in our culture,” one commenter said.

“We are no longer in the Stone Age where we believe in such bullshit,” another said.

And another: “Animals must be valued higher than religious sensitivities. There is no human right to meat.”

In 2016, the Freedom Party relaunched efforts to ban ritual slaughter in Austria.

Last week, Freedom Party lawmaker Gottfried Waldhäusl, the Cabinet minister in the state government of Lower Austria in charge of animal welfare as well as other portfolios, suggested a plan to limit access to kosher meat, conditioning its sale on permits that would be issued individually to observant Jews.

Jewish and Muslim religious laws require animals be conscious when their throats are cut for the meat to be kosher or halal, respectively. Judaism imposes stricter limitations on how animals should be slaughtered to ensure a swift dispatching. Critics of the production of kosher and halal meat say it is cruel, though advocates of the practices argue they cause less suffering overall because they are designed to be as painless as possible and cannot be fully mechanized.

The Freedom Party was founded in 1956 by a Nazi SS officer. Its past leader, Joerg Haider, called SS veterans “decent people of good character.”