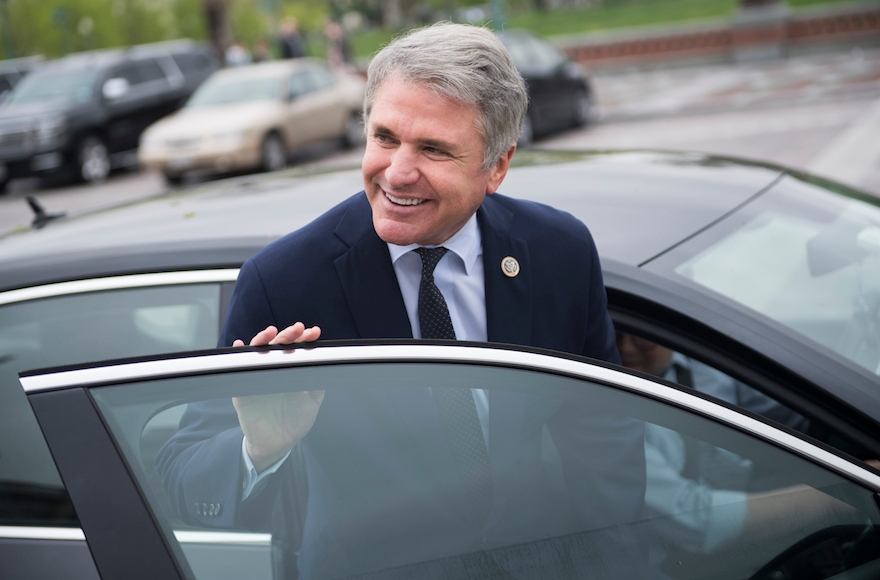 WASHINGTON (JTA) — Rep. Michael McCaul wants Israeli Prime Minister Benjamin Netanyahu to know he has his back when it comes to Israel’s demand that Iran leaves Syria for good.

McCaul, speaking this week to JTA, said he was concerned about the Trump administration’s commitment to backing Israel in its negotiations with Russia about removing Iranian forces from Syria. The 7-year-old civil war in Syria is winding down, and the Assad regime is emerging triumphant because of support from Russia and Iran along with Hezbollah, the Iran-allied militia based in Lebanon.

Russia wants Israel to take a deal that keeps Iranian forces 60 miles from the Golan Heights; Israel is resisting. President Donald Trump has said he likes Russia’s Syria proposals as they relate to Israel, although he and his officials have not specifically addressed the plan for a partial Iranian pullout as opposed to a full one.

Regarding any deal related to Iran, McCaul said “I’m very concerned about the Russian aggression and being able to trust” Russian President Vladimir Putin.

“I was critical of the president basically comparing Putin to our intelligence community,” the congressman said. “He’s not our friend. He’s certainly not an ally.”

McCaul was referring to Trump’s Helsinki summit with Putin earlier this month when Trump treated as equivalent U.S. intelligence community conclusions that Russia interfered in U.S. elections and Putin’s denials.

McCaul’s outspoken criticism of Trump’s Russia posture made headlines last week when he expounded on it at length at the American Enterprise Institute. That posture and his leadership role suggest that congressional Republicans will not easily roll over on some issues, among them treating Russia with at least a skepticism more robust than Trump’s.

In his interview with JTA, McCaul said that backing Israel was a part of the calculus in confronting Russia in the international arena, in addition to being a U.S. value in and of itself. Syria, he said, was “one of the greatest foreign policy challenges” facing the United States.

He said he was especially wary of Trump’s stated plans to pull the 2,000 U.S. special operations troops out of Syria.

“It would be similar to what [President Barack] Obama did in Iraq,” McCaul said, referring to Obama’s pullout from the country in 2011 — a factor that Republicans say stoked chaos in the region.

“It’s important to keep those 2,000 special ops there to have stability,” he said. 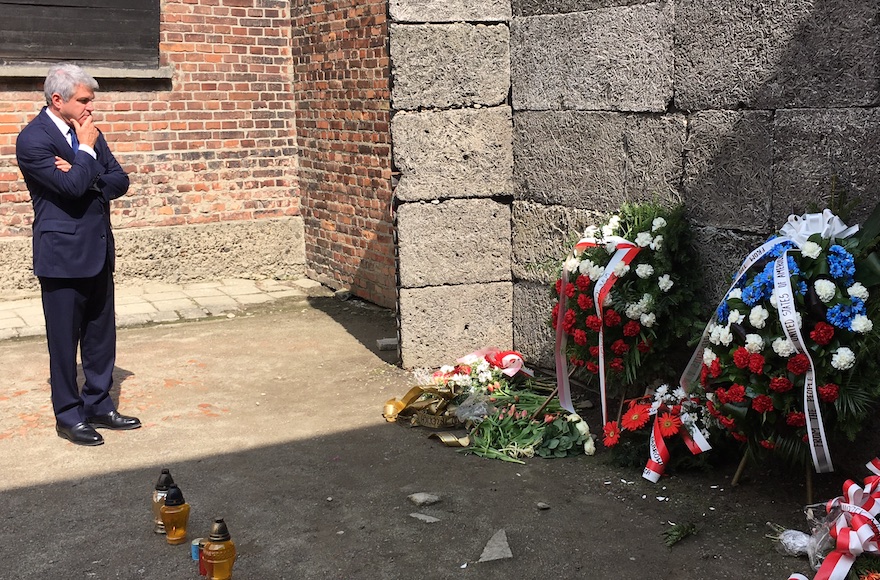 McCaul on his tour of Auschwitz in 2017. (Office of McCaul)

McCaul last week pushed back against one tangential line in that speech, in which he stated the disputed claim that Soviet leader Joseph Stalin killed more people in Ukraine than Adolf Hitler killed Jews in World War II. The line gained unwanted attention, in JTA and elsewhere.

His office said the congressman was merely “trying to highlight the atrocities of the Stalin era, not diminish the scope of the Holocaust.”

McCaul, who has visited Israel multiple times and met with Netanyahu, credits Trump with improving the relationship between the two countries after eight years of ups and downs under Obama.

“This president has been very strong about the fact Israel is our ally,” he said. “Under previous administrations, when I would travel to Israel, they didn’t understand why we were embracing Iran,” he said, referring to the 2015 Iran nuclear deal. Obama administration officials said the deal, which traded sanctions relief for a rollback in Iran’s nuclear program, made it easier to confront Iran in other arenas. Trump has pulled out of the agreement.

Under Trump, McCaul said, “The foreign policy has a bit more clarity that we support Israel. That’s why we moved the embassy to Jerusalem.”

“Every time I meet with Prime Minister Netanyahu, he gets it,” McCaul said.

Last year, McCaul was honored by the Jewish Institute for National Security Affairs, a group with close ties to the Republican establishment.

McCaul also said he hoped the Trump administration — and his friend, Secretary of State Mike Pompeo — would soon name an anti-Semitism monitor, an office that has been unstaffed for over a year.