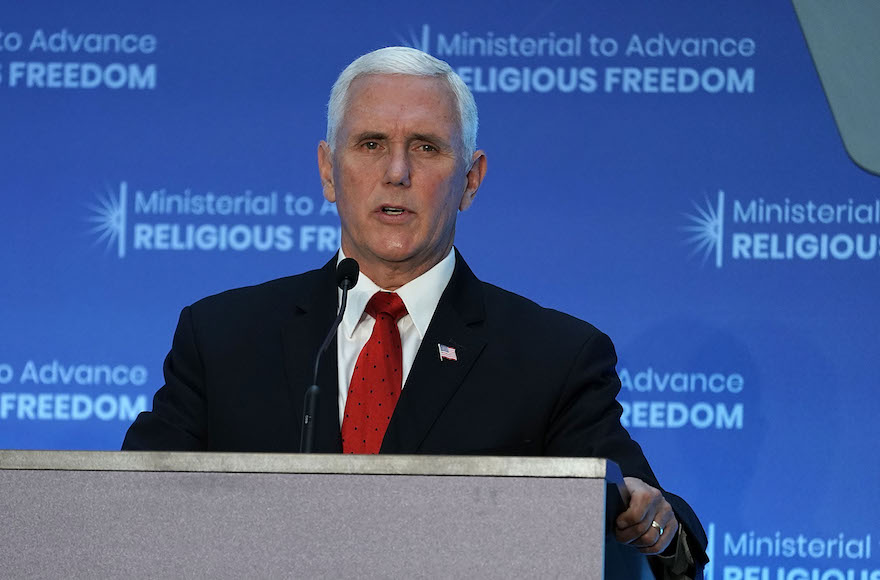 WASHINGTON (JTA) — Vice President Mike Pence cited attacks on Jews in Europe to show that religious bigotry is not limited to authoritarian governments.

Wrapping up a rollout of a major Trump administration effort to fight for religious freedom, Pence made the remarks Thursday on the final day of the Ministerial to Advance Religious Freedom in Washington, D.C., after singling out Iran for its persecution of religious minorities.

“While religious freedom is always in danger in authoritarian regimes, threats to religious minorities are not confined to autocracies or dictatorships,” he told government officials from from 80 countries, including Israel. “They can, and do, arise in free societies, as well — not from government persecution but from prejudice and hatred.”

The vice president noted a rise in religious intolerance in Europe.

“Just 70 years after the Holocaust, attacks on Jews, even on aging Holocaust survivors, are growing at an alarming rate,” he said. Pence cited what he said was a record high last year in attacks on British Jews, and warnings of Jewish leaders in France and Germany not to wear kippahs.

“These acts of violence and hatred and anti-Semitism must end,” Pence said to applause.

The officials at the conference came to consider strategies for defending religious freedoms. It was initiated by Sam Brownback, the State Department’s religious freedoms envoy, and headliners included Mike Pompeo, the U.S. secretary of state.

The get-together rolled out new Trump administration initiatives, including the Genocide Recovery and Persecution Response Program.

Pence said the program, which would deliver relief directly to communities affected by genocide, at first would focus on areas of the Middle East ravaged by Islamist extremists like the Islamic State terrorist group, or ISIS.

“America will help the victims of ISIS reclaim their lands, rebuild their lives and replant their roots in their ancient homelands so that all religions can flourish, once again, across the Middle East and the ancient world,” Pence said to applause.