Israel to expand settlement in response to deadly stabbing 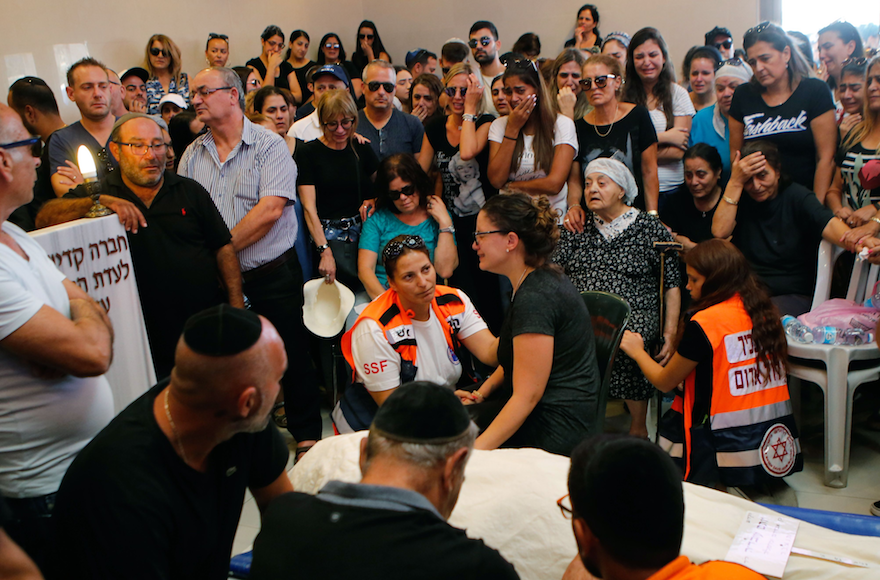 Relatives and friends mourn during the funeral of Yotam Ovadia, who was killed by a Palestinian in a stabbing attack in the West Bank settlement of Adam in Jerusalem, July 27, 2018. (Gil Cohen-Magen/AFP/Getty Images)
Advertisement

(JTA) — Israel said it will build hundreds of new homes in a settlement where a Palestinian teenager killed an Israeli and wounded two others in a knife attack Thursday.

“The best answer to terrorism is the expansion of settlements,” Liberman tweeted.

The assailant, later identified as Mohammed Dar Youssef, 17, from the village of Kobar, mounted the security fence surrounding Adam on Thursday evening and stabbed two men before being shot to death by a third, who also suffered stab wounds.

The army named the man who died as Yotam Ovadia, 31; the Israeli media reported he had two young children. One 58-year-old victim is seriously wounded but stable. The third victim was lightly wounded.

The army said Friday that it raided Kobar, questioned a number of the assailant’s family members and suspended their work permits.

“Yet another barbaric attack tonight. When will President Abbas and Palestinian leaders condemn the violence?” he wrote on Twitter.

There was no response from the Abbas government.

Yet another barbaric attack tonight. When will President Abbas and Palestinian leaders condemn the violence? Our thoughts and prayers are with the victims and their families tonight.