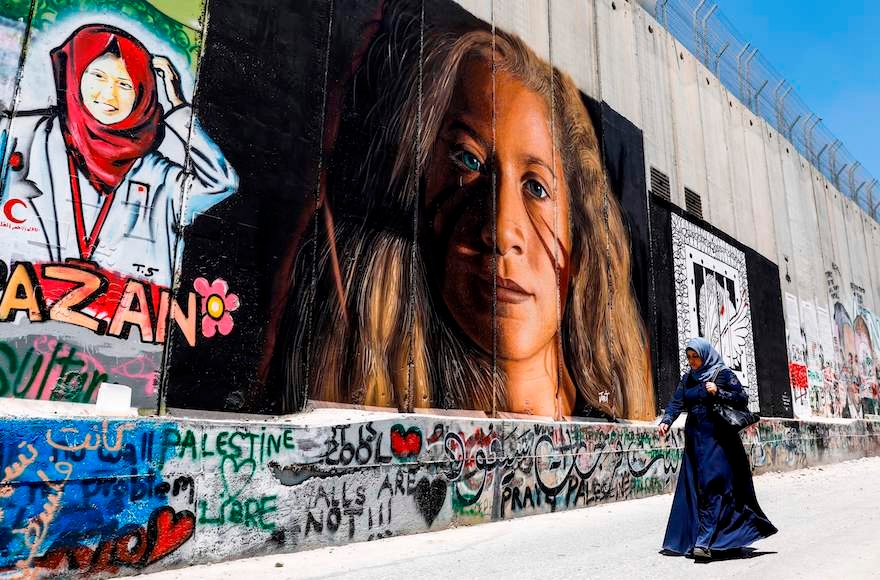 (JTA) — When Ahed Tamimi left an Israeli prison on Sunday after eight months, she returned home to jubilation from friends and family in her West Bank hometown of Nabi Saleh. The 17-year-old Palestinian activist also was celebrated as a hero around the world for what some see as her bravery in confronting Israeli soldiers.

Many in Israel, meanwhile, view her as a pawn in a Palestinian scheme to stage provocations with soldiers to make Israel look bad in the media. And many think she is succeeding.

But Tamimi isn’t just any Palestinian teen. She comes from a prominent Palestinian activist family and has a long history of scuffling with Israeli soldiers.

Who is Ahed Tamimi?

Tamimi comes from Nabi Saleh, a politically active village that is the site of weekly protests by residents — often labeled militant by Israeli security — against what they see as Israel’s confiscation of their land to build a nearby settlement, Halamish. Tamimi’s father, Bassem, is one of the leaders of the protests.

Her cousin, Ahlam Tamimi, helped carry out a 2001 terror attack known as the Sbarro massacre — a Palestinian suicide bomber blew himself up at a pizza parlor in Jerusalem, killing 15 and injuring 130.

Tamimi first rose to fame in 2012 when she was filmed screaming at and raising her fist at Israeli soldiers after her brother was arrested. The images in the video are striking — a blonde 11-year-old wearing a tank top with a peace sign and the word “love” written on it confronting gun-carrying Israeli soldiers.

The video made the rounds on the internet, earning the attention of Turkish Prime Minister Recep Tayyip Erdogan, who met with Tamimi and her mother. An Istanbul municipality gave Tamimi an award for her actions.

In 2015, Tamimi again confronted a soldier in a video that went viral. It shows a soldier attempting to arrest Tamimi’s then 12-year-old brother for throwing rocks. As the soldier restrains the boy, Tamimi, then 14, and several adult women start pulling at the soldier. At one point Tamimi, who wears a bright pink “Tweetybird” cartoon shirt, bites the soldier’s hand. Eventually the soldier relents and leaves the crowd. The video again was widely viewed, with Palestinian activists praising Tamimi’s actions.

Why is she in the news again?

Early Sunday, Tamimi was released from Israeli prison. She had been arrested in December after appearing in yet another viral video — shot by her mother, who also was arrested — in which she and two other girls slap and harass Israeli soldiers. Afterward, she calls on Palestinians to stab and throw rocks at Israelis, and offer themselves as suicide bombers in order to “liberate Palestine.”

Her family claims the video was filmed after her brother was allegedly shot in the head with a rubber bullet by Israeli soldiers.

In March, Tamimi accepted a plea deal to spend eight months in prison, under which she pleaded guilty to four counts of assault, including slapping the soldier in the viral video. Tamimi completed her sentence — she had already spent four months in prison prior to accepting the plea deal — and exited the prison even a bigger icon than before.

Tamimi’s arrest and imprisonment attracted widespread attention. A group of prominent Americans — including actors Danny Glover, Rosario Dawson and Jesse Williams; writers Cornel West and Alice Walker; and activist Angela Davis — signed a letter calling for her to be freed. The letter drew parallels between Tamimi and the highly publicized deaths of Trayvon Martin and Kalief Browder. Martin was a black teen teen shot to death by a neighborhood watch coordinator in Florida, while Browder, a black man from New York City, spent three years in prison despite not having been convicted of a crime and committed suicide after his release.

On Monday, Nelson Mandela’s grandson, Mandla Mandela, said Tamimi would receive an award in South Africa “for her bravery, resistance and being a symbol of hope for millions.”

What do her critics say?

They also say the family’s association with relatives convicted of  terrorism — including Tamimi’s cousin, who helped plan the deadly Sbarro terror attack — is proof of their fanaticism and refutes those who say they represent a new wave of Paletinian nonviolent resistance. Australian businessman Arnold Roth, whose daughter Malki was killed in the Sbarro attack, writes that journalists have fallen into the Tamimis’ trap.

“They also deny what Ahed symbolizes – identification with the vicious murderers in her own clan, with explosive rage, with a horrifying zealotry that brings people to push their society’s innocent children onto the front lines,” Roth wrote. “The Palestinian Arabs have many needs but what this girl stands for – more anger, more bitterness and more failure – delivers nothing of value to them.”

Tamimi is welcomed by relatives and supporters following her release from an Israeli prison, July 29, 2018. (Flash90)

How did she become a Palestinian national symbol?

For Palestinian activists, she is the perfect face to represent their struggle: a 17-year-old unarmed girl who confronts Israeli soldiers but poses no real immediate threat to them. Many have said her blonde, untamed curls and photogenic features don’t exactly hurt either.

“If she was veiled and dark-skinned, would she have got the same attention?” her father, Bassem, asked the French news agency AFP last year.

Michael Oren, who formerly served as Israel’s ambassador to the United States and now represents the Kulanu party in the Knesset, tweeted in December: “The Tamimi family — which may not be a real family — dresses up kids in American clothes and pays them to provoke IDF troops on camera. This cynical and cruel use of children constitutes abuse.”

Her father acknowledges that making such videos is an effective way to sway public opinion on the Palestinian struggle.

“When we are able to get a video like this, we can use it to great effect,” Bassem Tamimi told The Times of Israel after the 2015 video went viral. “When enough people here see these videos and hear our stories, it can start a kind of intifada [popular Palestinian uprising] against Israel in the United States.”

Did Israel shoot itself in the foot by arresting Tamimi?

Nachman Shai, the former spokesman for the IDF and the Knesset’s current deputy speaker, wrote in The Jerusalem Post that Israel was “caught in the trap” set by the Tamimis.

Journalist Allison Kaplan Sommer argued in Haaretz, a left-wing Israeli daily, that though the government wanted to make an example of Tamimi to deter others from similar actions, it ended up doing quite the opposite.

“By the time Tamimi was released Sunday, after completing her eight-month sentence for four counts of assault, she had graduated from viral web star into an icon,” Kaplan Sommer wrote. “Capped by the fanfare around her release, her detention ultimately did more damage to Israel’s international image than the initial video of her slapping a soldier ever could.”