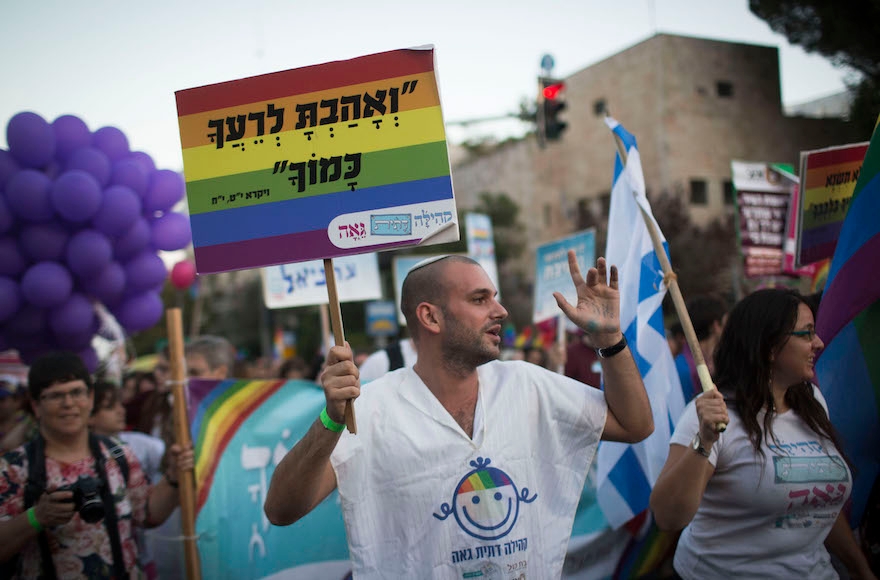 JERUSALEM (JTA) — Dozens of American and Israeli Orthodox rabbis have signed a letter in support of the LGBTQ community in response to a letter last week from some 200 Orthodox rabbis in Israel that called its members “perverts” and an “organization of abominations.”

At least 75 liberal Orthodox rabbis have signed the letter, which was first circulated on Tuesday.They call on the Orthodox community to “redouble our efforts to turn our synagogues, homes and communities into safe and tolerant places for the LGBTQ community.”

“Instead of hate, let us offer love. Where others demean, let us strive for equality,” the letter says.

Signatures are still coming in. Organizers plan to officially present the letter on Thursday at the Jerusalem Pride parade.

The letter comes less than a week after more than 200 religious Zionist rabbis, including heads of yeshivas, released a letter that said “the healthy majority in the State of Israel is shocked by the provocations and the loss of the way of the abomination organizations,” referring to groups that support the LGBTQ community. They also wrote that “the aggressive terrorism, accompanied by media brainwashing, to turn the perverts into heroes will not work.”

The letter reportedly was a show of support for Rabbi Aryeh Stern, the chief rabbi of Jerusalem, after he was criticized for saying that the children of same-sex couples will grow up to be “miserable.” His comments followed the passage of a surrogacy law earlier this month that expands those eligible to hire surrogates in Israel to include single women, but excludes single men and gay couples.

Another letter released Tuesday in response to the original letter came from about 100 members of the LGBT community who grew up in religious homes and mostly still live a religious lifestyle. They said they “read with great pain and sorrow the letter of rabbis written against us.”

“We, who grew up on the values of ‘love your neighbor as yourself’ and ‘beloved is man who was created in the image (of God)’, are hurt by the irresponsible disregard, exclusion and aggression of many of the leaders of the religious public, against us and against our brothers and sisters,” they wrote.

“Know that your words and actions have far-reaching consequences regarding the wellbeing of your loved ones, your students and members of your communities. Bear in mind that we are all responsible for one another.”

The annual March for Pride and Tolerance in Jerusalem, organized by the LGBT community, will take place Thursday, Aug. 2.