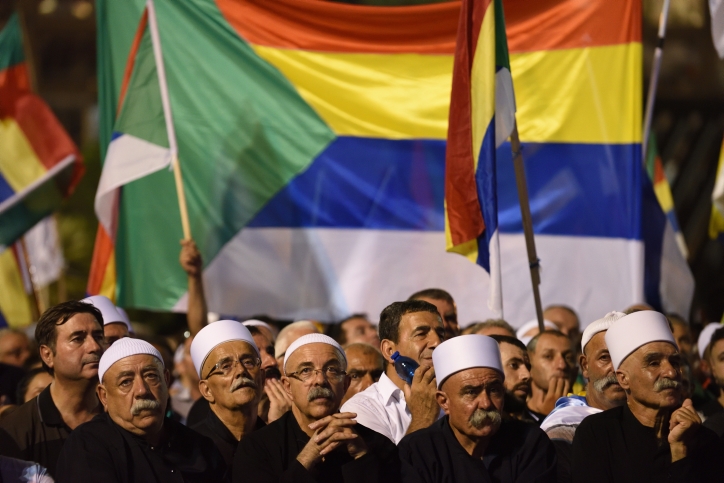 JERUSALEM (JTA) — Tens of thousands of Israel’s Druze community and their supporters rallied in Tel Aviv against the controversial nation-state law.

Israeli media reported that at least 50,000 and up to 90,000 participated in the Druze-led rally on Saturday night in Rabin Square.

“We’re all proud of the democratic and free State of Israel, where human dignity and freedom are the supreme values. We’ve never doubted the Jewish identity of the state. We recognized its Jewish character with full equality for its non-Jewish citizens,” Druze religious leader Sheikh Mowafak Tarif said at the rally.

“No one can teach us what sacrifice is, and no one can preach to us about loyalty and devotion—the military cemeteries are a testament to that. We are determined to fight alongside you for the state’s character and the right to live in it with equality and dignity,” Tarif, who received the honor of lighting a torch at last year’s national Independence Day ceremony, said.  “Despite our unconditional loyalty to the state, the state doesn’t see us as equals. The cry of the Druze community is real. They feel justifiably that someone seeks to take their Israeliness away.”

Tarif also said that he sincerely believes that Prime Minister Benjamin Netanyahu, who has had several meetings with Druze leaders since the passage of the law, and who appointed a high-level committee to recommend and implement actions to cement the position of the Druze in Israel society, plans to fix the damage caused by the law.

“We came here to tell the entire Israeli nation, with all of the Israeli people, that this country is for all of us,” retired Brig. Gen. Amal Assad told The Associated Press. “We were born here, we will die here, we love this country, we have defended it, and we will continue to live here together — Jews, Arabs, Druze, Circassians, Bedouins, as equal brothers. We are all Israelis.”

Druze, unlike other Arabs who make Israel their home, are subject to the mandatory draft. Several Druze servicemen in the last week have announced that they would resign from the military due to the passage of the law.

Assad, who spearheaded activity against the nation-state law passed last month, became more well known in Israel last week amid reports that Prime Minister Benjamin Netanyahu abruptly left a meeting with him and other Druze leaders after Assad said that the new law would “lead to apartheid.”

Ahead of the rally, 40 former Israeli diplomats released a statement against the nation-state law, saying that they are “embarrassed” and “pained” by its passage.

“During our years of service for the State of Israel, we could always look world nations in the eye and tell them with an honest heart that Israel, being the only democracy in the Middle East, is indeed a proud Jewish state, but one run in the spirit of Israel’s prophets and upholding equality between its different components, including by maintaining Arabic as an official language alongside Hebrew,” the statement said.

“Being proud of the right we were given to represent the State of Israel, defend it publicly, promote its interests, its security and our government’s policy, and act to advance science, the economy and culture in Israel, we express our protest against the legislation that excludes the minorities among us—Arabs, Muslims, Druze, Christians, Circassians and others,” it also said.

During the rally, opposition leader Tzippy Livni and Avi Gabbay, head of the Labor Party, announced in a statement that they would pass legislation making Israel’s Declaration of Independence, which calls Israel a Jewish and democratic state, the constitution of the country.

Hours after the end of the rally, Netanyahu on Sunday morning at the regular Cabinet meeting addressed again the issue of the nation-state law.

“The State of Israel is the national state of the Jewish people. Israel is a Jewish and democratic state. Individual rights are anchored in many laws including Basic Law: Human Dignity and Liberty. Nobody has harmed – and nobody intends to harm – these individual rights but without the Nation-State Law it will be impossible to ensure for [future] generations the future of Israel as a Jewish national state,” Netanyahu said.

He also said that the “deep bond between the Druze community and our commitment to it are also essential; therefore, today we will establish a special ministerial committee to advance this bond and this commitment and at the same time will appreciate those of all religions and all ethnic communities who serve in the IDF and the security forces.”