At 20, Jacob Wohl wants to be the face and voice of young Jewish Trump supporters 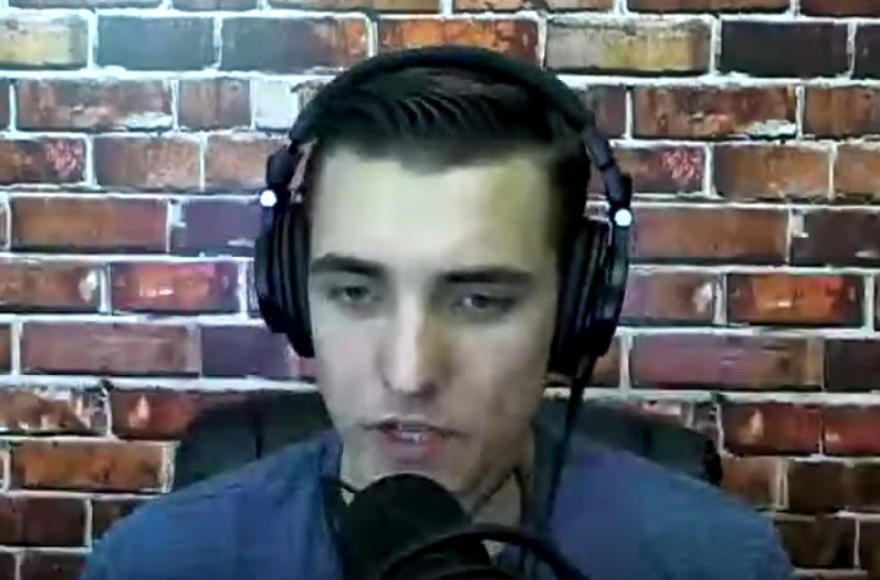 And that was just Friday morning.

To his 158,000 followers, Wohl, 20, describes himself as “Conservative, Trump Supporter, Zionist.” So he seemed like an interesting person to profile for JTA. And in the 19 minutes before he hung up on me, Wohl said his share of interesting things.

He complained about children of immigrants who couldn’t speak English in his second-grade class. He insisted that Puerto Rico, a territory of the United States, has a socialist government. He equated the Palestinian Authority with ISIS.

“I think that conservatives find that I really have my finger on the pulse of the issues that matter,” Wohl said of his hyperactive Twitter feed, which has gained nearly 100,000 followers in the past year. “I don’t spend a lot of time on things I view as unimportant.”

The economy is absolutely booming, yet democrats are too worried about plastic straws to work! Too bad pic.twitter.com/r48oWgges6

The weekend saw more bombastic tweets. On Sunday, Wohl called Trump “the greatest friend of the Jewish People to ever occupy the White House.” Two days earlier he called on Barack Obama to be extradited to Israel for meddling in its 2015 elections. (A former Obama campaign aide, Jeremy Bird, worked for a nonpartisan Israeli NGO that campaigned against Benjamin Netanyahu. American campaign consultants of both parties have a long history of working on Israeli elections.)

Barack Obama should be extradited to Israel and tried for meddling in their elections!

Also on Sunday, he debated the causes of Puerto Rico’s economic misery with Alexandria Ocasio-Cortez, the New York congressional nominee and a rising star of progressive Democrats.

1. I never said Puerto Rico wasn’t in the US (work on reading comprehension)

2. Stop blaming capitalism. The out of control welfare state is what destroyed Puerto Rico

The way Wohl tells his story, he began his first hedge fund, Wohl Capital Investment Group, with money from high school classmates and their parents. In a Bloomberg profile, he claimed the principal of his high school invested with him. Subsequently he started another investment fund, Montgomery Assets. Both funds are currently inactive.

But the young investor, who has been called “The Wohl of Wall Street,” soon ran into trouble and has been investigated by multiple regulatory organizations. He also posted personal ads on Craigslist seeking attractive women while claiming to run a modeling agency, according to the Daily Beast. One woman accused him of posting her photo online, in a bra, as the “Wohl Girl of the Month” without her permission. The domain WohlGirls.com expired last month.

Wohl told JTA that he now does due diligence for mergers and acquisitions, though he would not reveal the name of his company or any further details.

“I’m not going to tell you because I don’t like journalists meddling in my private business,” he said. “It can only cause problems when journalists start meddling around in my employment situations and what I’m doing businesswise, as I’ve learned.”

Wohl was raised and still lives in Orange County, a politically conservative area of Southern California, in a Republican home. His father, David Wohl, is an attorney who has appeared on Fox News as a commentator and describes himself as a campaign surrogate for Trump. Wohl has followed in his father’s footsteps, appearing on Fox Business as early as 2015 to discuss his hedge fund.

His political activism ramped up with the start of Trump’s campaign in 2015, and since has skyrocketed. In addition to his Twitter activity, Wohl writes pieces for the right-wing site The Gateway Pundit, runs his own right-wing news site called The Washington Reporter and co-hosts a podcast with the independent journalist Laura Loomer called “2 Live Jew,” which is advertised as the “#1 Podcast for Jewish Trump Supporters.” Episode titles have included “The Caliphate Comes to Toronto” and “Full Commie.”

Loomer boasts of “confronting public figures” in the style of Project Veritas, the right-wing gotcha operation where she worked in 2016. Last month she asked a Democrat gubernatorial candidate in Michigan who is Muslim to “reconcile your own personal practice of Islamic law with your Marxist socialist political platform that directly contradicts tenets within Islamic law.”

“Laura is on the cutting edge of stopping the Sharia invasion that’s happening in the United States, the Islamification of neighborhoods,” Wohl said on a recent podcast, referring to Islamic religious law. “They want Sharia courts. This is what they’re calling for, this is their vision, is to establish a caliphate in the West.”

Wohl said he agrees with Trump “on 90 percent or 95 percent of his positions” — first and foremost immigration. He said that “illegal immigration has just devastated communities” in Southern California, something Wohl said he realized when most of his second-grade class could not speak “a lick of English.” He said that hindered his education.

“A wall would change a lot about a lot of border states as far as public safety,” he said. “What’s coming across our southern border is in many cases, not in all cases, but in many cases tremendous crime.

“When Trump came down the escalator and said ‘We’re going to build a great, great wall and we’re going to make Mexico pay for that wall,’ he had my vote,” Wohl said, referring to Trump’s campaign launch.

One of the issues on which Wohl disagrees with Trump relates to Israel. Wohl would like to see the president, who has been friendly to the Israeli government’s agenda, take an even harder line against the Palestinian Authority, which administers the Palestinian areas of the West Bank.

“I would like to see the Palestinian Authority defunded completely by the United States and treated like ISIS or any other terrorist organization because that’s what they are,” he said.

Wohl’s political opinions are no less pointed on Twitter, where he focuses his commentary on praising the president and opposing his opponents. Wohl said proudly that Trump has retweeted him three times and replied to one of his tweets, which he said is “a recognition that you’re doing something right.”

Other tweeters have enjoyed mocking Wohl for a curious trope he repeats: a contention that he hears “coffee shop hipster liberals” praising the president. He has said so six separate times.

The most likely explanation of these tweets is that the guy is making it all up.

But I prefer to believe that there is a hipster coffee shop in his neighborhood where the customers hilariously conspire to con him into thinking they're Trump supporters every time he walks in. pic.twitter.com/MqhdHBIFwN

I wanted to ask Wohl about this surreptitiously pro-Trump hipster cafe. I also wanted to ask him more about his Judaism, as well as his future plans. But he hung up on me after I asked him a follow-up question about his claim that Puerto Rico is socialist.

“You’ve got a terrible attitude,” he said before ending the call.