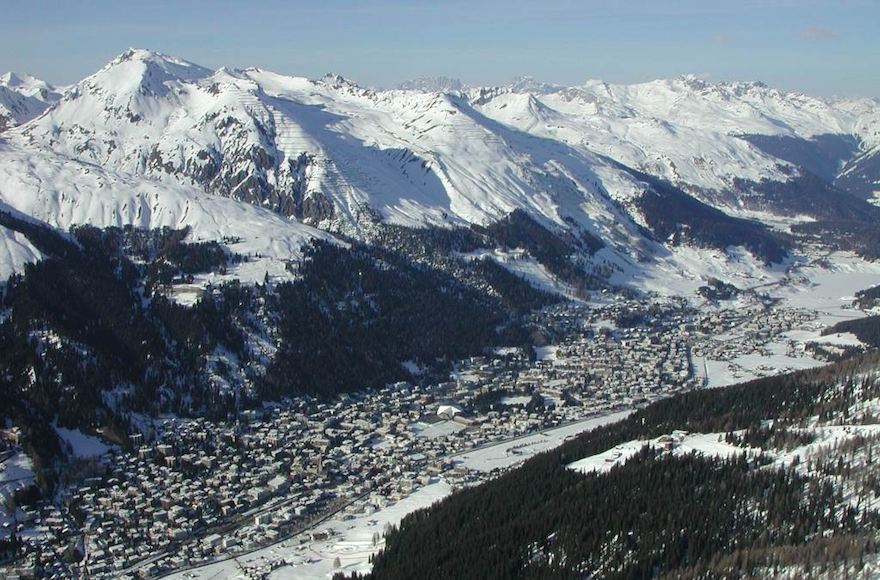 Davos in the Swiss Alps is a popular ski resort town with a conference center that hosts the annual World Economic Forum. (Wikimedia Commons)
Advertisement

(JTA) — A tourism official from the Davos area in Switzerland penned a letter complaining about the behavior of Jewish visitors, which was then translated into Hebrew and posted publicly at hotels.

Reto Branschi, who heads the tourism office of the Davos skiing village and that of nearby Klosters, appears to aim his complaints at haredi Orthodox guests, who he blames for being untidy and crowding local playgrounds.

Mosbacher had the letter translated to Hebrew and Yiddish, the news website Kikar HaShabbat reported. The report did not say how copies of the letter in those languages came to appear on message boards of local hotels.

Branschi wrote that “there have been complaints that diapers and other waste simply gets left behind in the woods,” that “playgrounds have been taken up by large groups, leaving no room for small families,” and that during two tours at a local cheese factory in 2017 and 2018, “Jewish guests held their noses, disturbing some of the other participants.”

In recent years, Davos hoteliers have depended on a haredi Orthodox clientele who flock there during the summer months, which for the skiing region is off-season. The trend has allowed haredi families with large children to enjoy reduced cost for vacations in Alpine resorts with excellent infrastructure, and the local tourism industry to increase the potential of amenities there.

But tensions have begun to form in what some attribute to cultural differences and some inappropriate behavior by the haredi guests from insular communities, and others maintain is intolerance and xenophobia by some hosts.

Last year in August, the manager of a hotel in Arosa, a village situated 10 miles west of Davos, apologized for posting signs instructing “Jewish guests” to shower before entering the pool and to access the refrigerator at set times. Her action provoked widespread outrage and even a call by Israel’s Foreign Ministry to prosecute her for discrimination.

Jonathan Kreutner, the secretary-general of the Swiss Federation of Jewish Communities, was quoted by SudOst Schweiz as confirming that Branschi’s claims are “factually based” and that both Jews in Davos and hoteliers need to “find solutions” to the issues cited by the tourism official.

In his letter, Branschi also suggested abuse by haredi guests of guest cards, “which allows free use of the cable car and other benefits.” Haredi guests, he said, “lose them more often than average.”

Paying Jewish guests “use the most popular bus tour only to go to the cemetery. This is unfair because it takes up seats for guests who want to complete the whole tour,” Branschi wrote. Some guests are not registered in reservation forms, he went on to write, calling it “unfair to other guests.” Haredim take baby buggies on guided tours “that are clearly marked as unsuitable” for babies and “leave children unsupervised.”