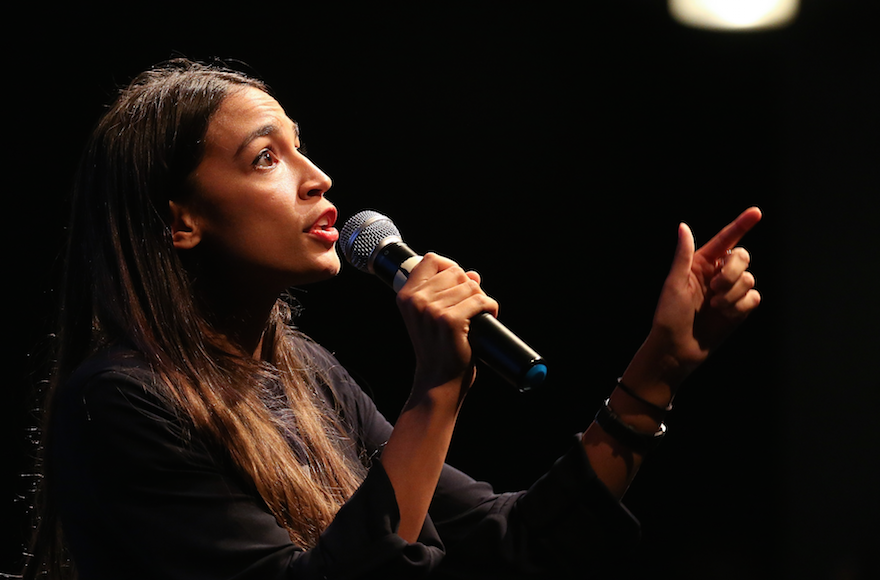 NEW YORK (JTA) — Alexandria Ocasio-Cortez, the Democratic congressional candidate and rising progressive star, was cheered at an event at a Jewish museum that did not touch on Israel or the Jewish community.

Ocasio-Cortez appeared at a conference here hosted by the Immigrant Arts Coalition at the Museum of Jewish Heritage, participating in a panel focused on women in the arts. While politics did frequently come up, none of the panelists — including Ocasio-Cortez, who has been critical of Israel — mentioned Jews or Israel.

Ocasio-Cortez, 28, is an activist who shocked the political establishment in June when she defeated longtime Rep. Joe Crowley in the Democratic congressional primary in New York’s 14th Congressional District. She ran on staunchly progressive positions and her background as a young Hispanic woman in the largely Hispanic district straddling Queens and the Bronx.

At the event, she talked about deciding to run, her work as an activist, her campaign’s graphic design and the need for Democrats to assertively take the moral high ground in the upcoming midterm elections.

“I look at my politics as, what is the right thing to do and how do we get closer to that,” she said. “We have to be the ones that have that voice of moral clarity because if we let it slide, we let this country slide.”

In May, Ocasio-Cortez tweeted that clashes on the Gaza border, in which Israeli soldiers killed 60 Palestinians, mostly members of Hamas, were a “massacre.” In a July interview on PBS, she said “I believe absolutely in Israel’s right to exist” and was “a proponent of a two-state solution.” She also criticized Israel’s conduct in the West Bank.

“I also think that what people are starting to see at least in the occupation … of Palestine [is] just an increasing crisis of humanitarian condition and that to me is just where I tend to come from on this issue,” she said, adding later that “I think what I meant is like the settlements that are increasing in some of these areas in places where Palestinians are experiencing difficulty in access to their housing and homes.”

Her comments drew criticism from both the right, for criticizing Israel, and the left, for supporting its right to exist.

In the weeks prior to the museum event, the chairman of one of its co-sponsors, The National Yiddish Theater Folksbiene, objected to her appearance at the venue.

“Absent a public reassessment by Ms. Ocasio-Cortez of her unfair and extremist position [on Israel], she dishonors both the Immigrant Summit and the museum by her scheduled appearance,” Jeffrey Wiesenfeld said in a statement reported by The New York Jewish Week.

But aside from a few protesters from the far-right Jewish Defense League who stood outside the building, Ocasio-Cortez was given a warm welcome. The approximately 100 people at the event cheered after each time she spoke. And former Manhattan Borough President Ruth Messinger, a fellow panelist, praised her.

Messinger, who is also the former president of American Jewish World Service, a global aid group, said she met with Ocasio-Cortez before the primary and told her she had no shot at unseating Crowley. But at the panel, she called the candidate an example of moral courage.

“We need to test our own capacity for not just leadership, but for some of what Alexandria has already displayed in interviews, and that is moral courage,” she said. “Where do you stand? How do you put yourself forward knowing there will be consequences?”

Messinger told JTA following the event that Ocasio-Cortez should be given time to clarify her positions on specific issues, but that she possesses the qualities to be a successful member of Congress.

“She made very powerful statements in the campaign on a range of issues, but the in-depth thinking that she brings to it is exactly what will make her a great member of Congress,” Messinger told JTA.

“And so for any community, the question is to give some space and time to find out what she thinks. If you think, whoever the you is, that she ought to hear your point of view, she’s the kind of person who will be open to doing that.”