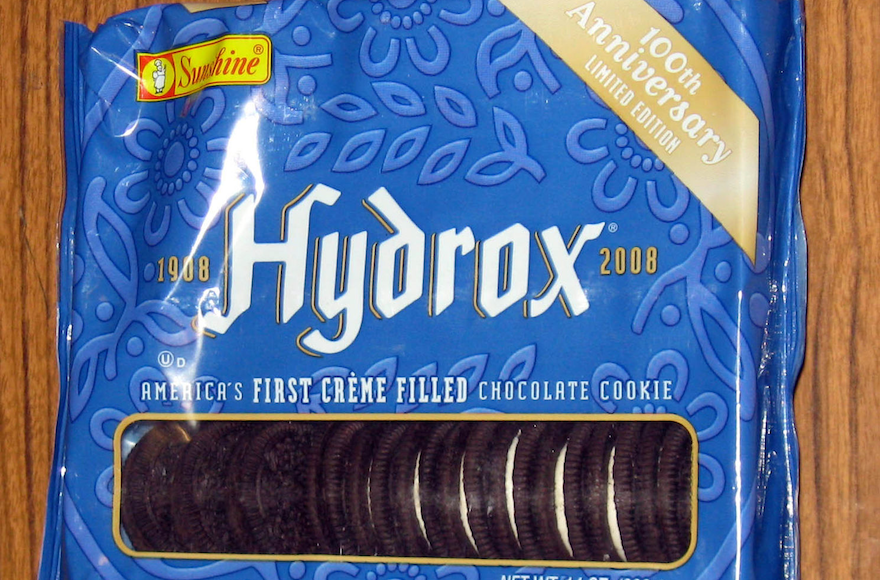 There is debate on how they should be eaten, but everyone knows they’re best when dunked in milk.

What you might not know is that Oreos are just a copycat of Hydrox, a sandwich cookie first sold in 1908, four years before Oreos appeared on shelves. Even though (or maybe because?) they were second, Oreos came to dominate the market, becoming a fixture in America’s grocery stores.

But for most of the past century plus, Hydrox has held on. And at least in part it’s because of the Jews.

Until a glorious day in 1998, Hydrox was the premier kosher sandwich cookie on the market, while Oreos remained “treif,” lacking a kosher heksher, or seal of approval. Growing up, I genuinely thought Hydrox cookies were knockoff Oreos produced specifically for religious Jews. Oreos were the forbidden fruit, and I still vividly remember when, shortly after they became kosher certified, my mom snagged a sleeve of Oreos from a Jewish event. We gobbled them up.

Hydrox stopped production in 2003, giving Oreo 12 years of a monopoly, give or take a 100th anniversary promotion by Hydrox’s then maker, Kellogg’s. A Pax Oreana, if you will. But in 2015, Hydrox, now part of Leaf Brands, sprang back like a phoenix and has been trying to duke it out with Oreo, David and Goliath style.

And now it’s taking that battle to the government.

Hydrox posted on Facebook that it has filed a formal complaint with the Federal Trade Commission accusing employees of Oreo’s parent company, Mondelez, of blocking Hydrox from view when it stocks Oreos on supermarket shelves. The Facebook post says Mondelez uses a system called “direct store distribution” in which employees of the brand, rather than supermarket attendants, stock the food. This allows the Oreo stockers to push Hydrox aside when they place Oreo boxes on the shelves.

Loyal Hydrox customers have sent in pictures of the cookies being boxed out by Oreos, moved behind other products or otherwise obscured from customers. Hydrox claims a major supermarket chain brought up the problem at a meeting.

“We believe in competition and choice but we firmly believe the folks @Mondelez (the owners of Oreo) have been undertaking a national program to damage our brand and stop us from competing,” Hydrox’s posts says. “Many of you over the last few years have been great at taking pictures when you see #hydroxcookies being moved or blocked from store shelves and we really appreciate your help.”

Mondelez sounds unconcerned about the complaint, telling Gizmodo that it is “confident that this accusation has no merit. The OREO brand is an iconic one, with a proud and rich history of delivering great tasting products and exciting innovations to our consumers for more than a century. This focus, and our commitment to operating with integrity, has made OREO America’s favorite cookie.”

So who will win, the original kosher sandwich cookie or the giant it’s fighting? Only time — and maybe a government agency — will tell.