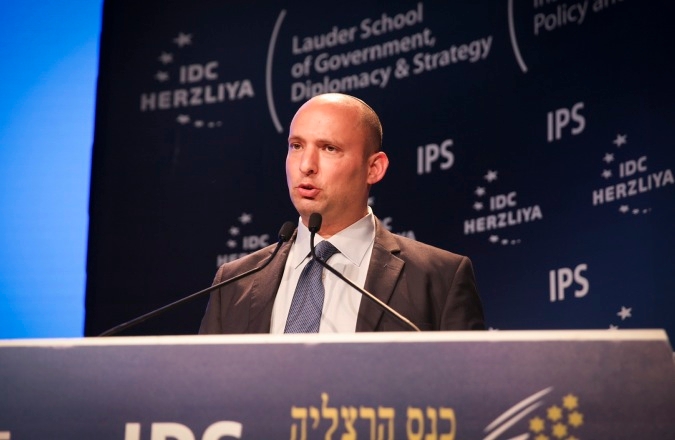 JERUSALEM (JTA) — Israel should not have acted with restraint in the face of hundreds of kites and balloons carrying incendiary materials launched from Gaza, Education Minister Naftali Bennett said Monday.

Bennett, the leader of the right-wing Jewish Home party, said Israel’s reluctance to go after those launching the kites, many of whom are children, allowed the problem to grow unacceptably large.

“If we had struck the first kite launchers when there were still one or two of them, it would not have reached thousands,” he said in an interview with the public broadcaster Kan translated by The Jerusalem Post. “They are terrorists in the full meaning of the word and we must eliminate them.”

Hundreds of acres of farmland and forests have been burned in the western Negev over the past few months.

“If we follow the formula of ‘quiet in return for quiet’ we will end up with a stronger Hamas, and we will have a second Hezbollah in Gaza,” Bennett said. “We have no interest in hurting the residents of Gaza. But we have a clear goal. Just like we had the strategic threat of tunnels and ignored it for years, until Operation Protective Edge, we have to do the same with a militarized Gaza. It is inconceivable that Hamas will fire on us when they wish and we will remain silent.”

Hamas has paused its rocket fire in recent days and said it would cease targeting Israel if the Israelis reciprocate “calm for calm.” However, Energy and Water Minister Yuval Steinitz told Kan that Israel had “not signed a cease-fire agreement.”

“Ousting Hamas is an option we are closer to now than any time in the past,” Steinitz said.

Also Monday, Defense Minister Avigdor Liberman claimed that all of the Palestinians killed in Gaza since the end of March are members of Hamas, saying that “since the start of the March of Return events, Hamas has sustained 168 deaths, 4,348 injured and dozens of terror facilities destroyed,” The Times of Israel reported.

The Israel Defense Forces has said that while it believes the majority of those who died were members of Hamas, its troops have also accidentally killed civilians. A pregnant woman and a toddler were reported to have been killed last week during Israeli strikes against a Hamas target next to their home.

In April, a Gaza photojournalist was shot while wearing a flak jacket marked “press” while photographing the clashes. Liberman told reporters that Yaser Murtaj, who sold photos to numerous international outlets, was also a member of Hamas who was using his media business as cover to obtain drone footage of IDF positions.

But the Washington Post said that Murtaja had recently been vetted and approved for a U.S. government grant and that Liberman “did not provide evidence for the assertions.”