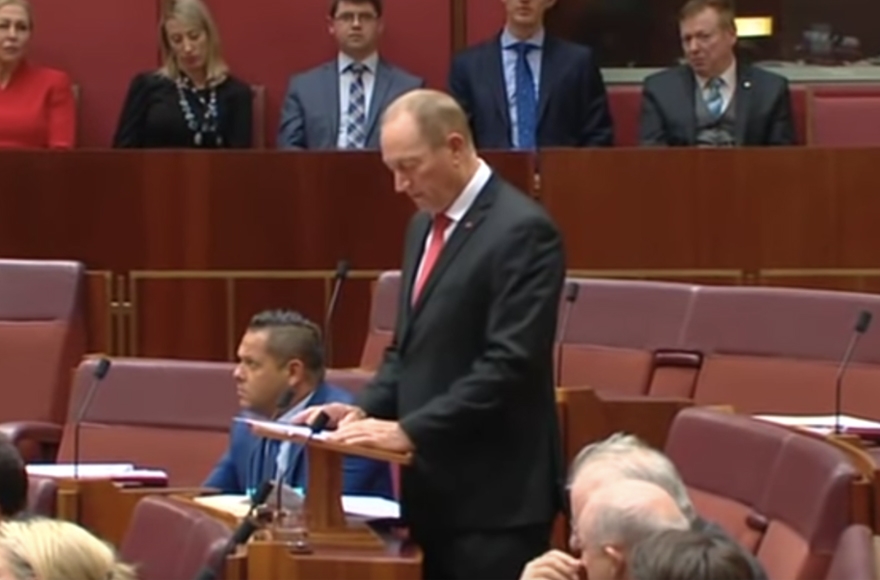 SYDNEY (JTA) — In a speech some compared to Hitler’s rants against the Jews, an Australian parliamentarian proposed a ban on Muslim immigration to the island nation, calling it the “final solution” to the problem of the decline of its “predominately European identity.”

In his maiden speech Tuesday, Queensland Sen. Fraser Anning, the sole representative of the fringe Katter Australian Party, advocated a ban on Muslim and non-English speaking migrants and a return to the long-repudiated “White Australia” policy barring the entrance of non-white immigrants to the country.

“Diversity should be managed to remain compatible with social cohesion and national identity,” Anning said. “We as a nation are entitled to insist that those who are allowed to come here predominantly reflect the historic European-Christian composition of Australian society. While all Muslims are not terrorists, certainly all terrorists these days are Muslims, so why would anyone want to bring more of them here? The final solution to the immigration problem, of course, is a popular vote.”

Condemnations came quickly, from the organized Australian Jewish community and politicians across the political spectrum.

“Regardless of his intentions, Senator Anning’s choice of words would have been deeply unsettling for Jewish Australians, especially Holocaust survivors,” Anton Block, the president of The Executive Council of Australian Jewry, told JTA. “For them the words ‘final solution’ in reference to an ‘alien’ group are a chilling reminder of how the process of dehumanization begins. They know from personal experience where it can end. Senator Anning should have been aware of this history.

“It has long been the ECAJ’s position that prospective migrants to Australia should be assessed on their individual merits, and not according to their skin color, ethnicity or religion.”

George Foster, the immediate past president of the Australia Association of Jewish Holocaust Survivors & Descendants, said “[t]he use of the phrase ‘the final solution’ is anathema to survivors of the Holocaust and their families. This phrase was used by the Nazis as a euphemism for the total destruction of European Jewry. To use such a phrase in this context erodes the gravity of the Holocaust and increases the distress of those who experienced indescribable horrors including witnessing the murder of their loved ones. Perhaps Senator Anning should take a tour of the Sydney Jewish Museum or indeed any Holocaust museum to understand the importance of language in connection with the Holocaust.”

The reaction to Anning’s speech prompted bipartisanship rarely seen in the Australian Parliament, with representatives of both the government and opposition coming out against his comments. Josh Frydenberg, a Jewish lawmaker from the Liberal Party, wiped away tears as Parliament member Ed Husic, a Muslim, spoke against racism. The two then embraced.

“I was deeply offended, no doubt like every Australian was, because these comments should not have been made in the Australian Parliament,” said Frydenberg, one of five Jewish Parliament members and the child of Holocaust survivors. “His comments are unacceptable. They’re insensitive, they’re ignorant, they’re divisive and they’re very hurtful. I mean, particularly using the term final solution. As we know, the Nazi killing machine was responsible for the deaths of more than 10 million people, including 1.5 million Jewish children,”

In an apparent attempt at damage control, Anning told reporters that he had “always been a big supporter of the Jewish community and they know that” but declined to apologize for his remarks.

In Parliament, Prime Minister Malcolm Turnbull said that he and opposition leader Bill Shorten have always stood against racism, adding that “the days of the White Australia policy are long, long ago, and our success is founded on our commitment to a shared national identity committed to those political values which unite us all.”