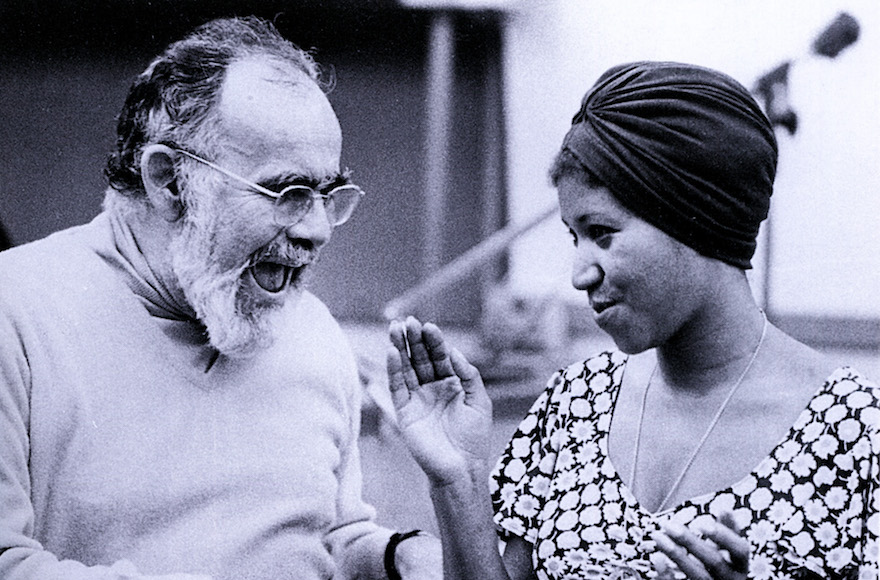 Jerry Wexler and Aretha Franklin in a recording studio in 1960. (GAB Archive/Redferns)
Advertisement

(JTA) — Aretha Franklin, the “Queen of Soul,” died Thursday at the age of 76. Her death reverberated so deeply that an incredible array of people from around the world, from Presidents Donald Trump and Barack Obama to musicians Paul McCartney and Diana Ross, took to social media to pay tribute.

Though the legendary singer’s first album was released in 1956, it took her years to achieve mainstream success. She rose to prominence in large part from the 1967 smash hit “Respect,” a cover of Otis Redding’s song from two years earlier that achieved much greater popularity than the original.

The man who helped her record “Respect” was the producer Jerry Wexler, a one-time journalist and the son of a German Jewish father and Polish Jewish mother from the Bronx, New York.

Wexler persuaded her to leave Columbia Records in 1966, where she had been groomed as a jazz singer, and sign with Atlantic Records, where he was an executive. They would form a close artist-producer bond, and Wexler would go on to produce multiple albums of hers. It was his idea to have Franklin cover “Respect.”

“He provided the vehicle to allow me to perform and express myself,” Franklin told The Wall Street Journal following Wexler’s death in 2008.

In his autobiography, “Rhythm and the Blues,” written with David Ruiz, Wexler described his vision for Franklin.

“Let her be comfortable. Let her play piano. Let her develop the rhythms, horn riffs, and backing vocals that will open her heart and expose her soul. Let her go, and go she did,” he wrote.

“Respect” had special resonance in the 1960s.

“The call for respect went from a request to a demand,” Wexler wrote. “And then, given the civil rights and feminist fervor that was building in the 1960s, respect — especially as Aretha articulated it with such force — took on new meaning. ‘Respect’ started off as a soul song and wound up a kind of national anthem.”