Kofi Annan remembered as a friend of Israel 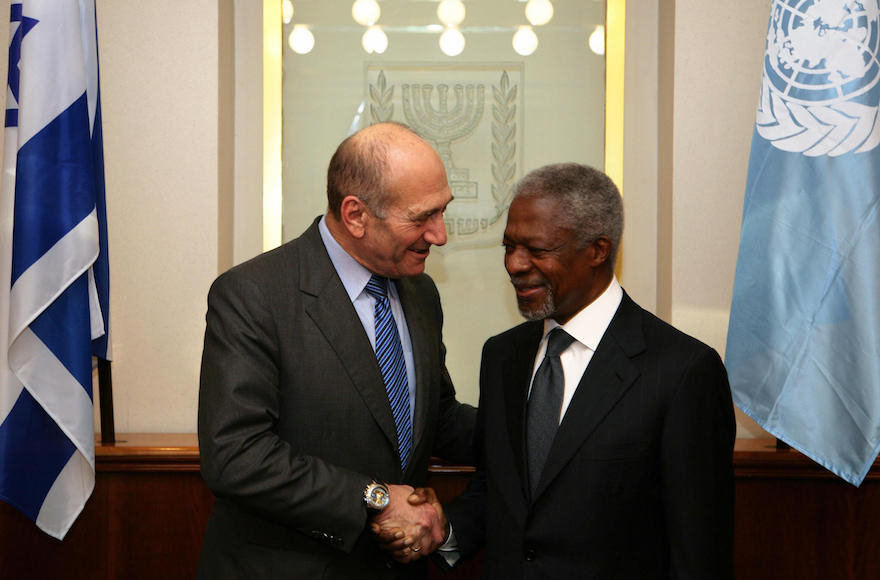 JERUSALEM (JTA) — Israeli Prime Minister Benjamin Netanyahu expressed his “sorrow” over the passing of former United Nations Secretary-General Kofi Annan, who died of an unspecified illness on Saturday. He was 80 years old.

Annan’s politics sometimes diverged sharply with those of Israel’s leaders. However, he was remembered by Israelis as a staunch proponent of the Jewish state’s right to exist who was firmly opposed to anti-Semitism.

In a statement to the press, Netanyahu described Annan, who led the international organization for nearly a decade starting in 1997, as a friend of Israel and the Jewish people.

“We will remember him as having been very active in the international arena and as someone who fought anti-Semitism and Holocaust denial,” said Netanyahu. “We send our condolences to his widow and his family.”

His eponymous Kofi Annan Foundation announced his passing on Twitter yesterday, posting that the Nobel Peace Prize Laureate had “passed away peacefully…after a short illness.”

A lifelong U.N. staffer from Ghana who rose through the ranks,  Annan had been both the subject of praise and intense criticism, especially for the U.N.’s lackluster response to the Rwandan genocide during his tenure as head of peacekeeping operations in the 1990s.

However, he also seriously strengthened the U.N.’s peacekeeping apparatus during his subsequent tenure as Secretary-General.

It is with immense sadness that the Annan family and the Kofi Annan Foundation announce that Kofi Annan, former Secretary General of the United Nations and Nobel Peace Laureate, passed away peacefully on Saturday 18th August after a short illness… pic.twitter.com/NDOy2NmAAs

In a statement, current Secretary-General António Guterres called Annan a “guiding force for good” who “provided people everywhere with a space for dialogue, a place for problem-solving and a path to a better world.”

A fierce proponent of a two-state solution, he was vocal in criticizing Jerusalem for the deaths of Palestinians killed during flareups, even going so far as to call for the deployment of peacekeepers in the West Bank following the Israeli army’s redeployment there during the Second Intifada.

In a statement, the Israeli Foreign Ministry described Annan as someone who “resisted the delegitimization of Israel” and “fought actively against Holocaust denial and supported the 2006 U.N. initiative on the International Holocaust Remembrance Day.”

“We worked together when he was secretary-general of the UN and we also had arguments, along with a partnership in the fight against anti-Semitism,” recalled former Foreign Minister Tzipi Livni. “The desire to act in a better world accompanied him until his death.”

“Kofi Annan, an individual of exceptional dignity, grace, and commitment, demonstrated that positively changing the UN posture towards Israel and the Jewish people is possible,” said David Harris, CEO of the American Jewish Committee, recalling how Annan tried to build bridges to the Jewish community.

“The United Nations is, I hope and believe, what it always should be – a place where Jews can feel at home,” Annan said during the AJC’s Centennial dinner in 2006. “I hope that within my lifetime, just as in this country, where Jews are accepted without question as full citizens, by all their fellow citizens, so Israel will be accepted without question as a member by the whole family of nations.”

Ronald Lauder, the president of the World Jewish Congress, also praised Annan for the establishment of International Holocaust Remembrance Day, and noted that during the Second Lebanon War in 2006 he helped secure a truce between Israel and Hezbollah.

“While his politics were often radically different from those of the Israeli government and the Jewish Diaspora, he made clear his position that the right of the State of Israel to exist was not up for negotiation, nor was the Jewish people’s historic connection to the land,” said Lauder.

UN Watch, an NGO that monitors the world body for signs of anti-Semitism and anti-Israel bias, recalled that Annan led efforts to reform the U.N.’s Commission on Human Rights, which had become a hotbed of anti-Israel activism and often turned a blind eye to the human rights violations of many of its own members.

“In 2005, Annan dropped a bombshell when he declared that countries had sought membership ‘not to strengthen human rights but to protect themselves against criticism or to criticize others,'” UN Watch recalled in a statement. When a new council appeared little better than its predecessor, “he spoke out, expressing the hope that the Council would deal with the Middle East issue ‘in an impartial way’ and ‘not allow it to monopolize attention at the expense of others where there are equally grave or even graver violations.'”