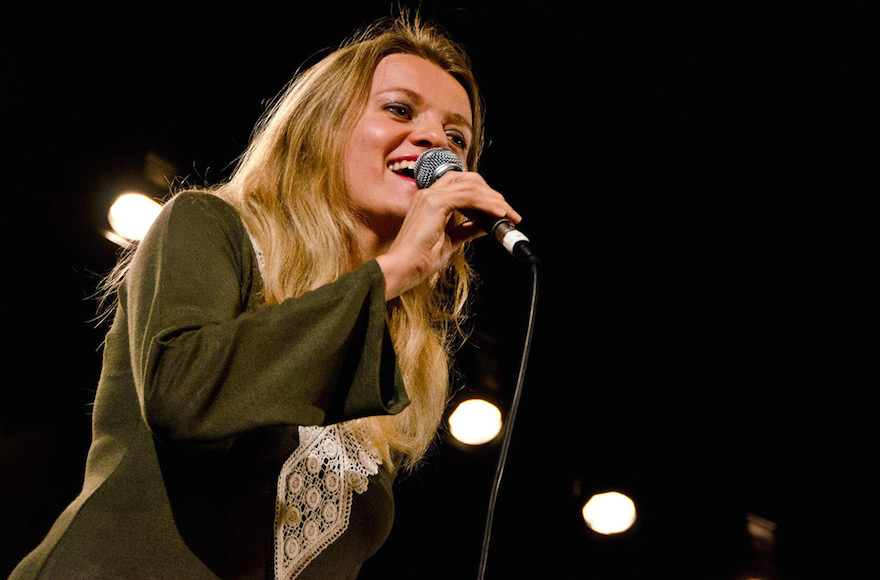 This story is sponsored by the Polish Cultural Institute New York.

Mieleszczuk, known simply as Olga in her native Poland and Avigail in her adopted Israel, began piano lessons at the age of 6, when she was plucked from kindergarten to pursue a career in classical music.

Raised as a devout Catholic, Olga set out on a journey of Jewish transformation during an interfaith visit to Auschwitz, a five-day retreat where she and other Poles met American and Israeli Jews as well as some German grandchildren of Nazi officers.

“When I started to sing in Yiddish, I had no idea about Jewish culture at all,” she said, recalling the emotional visit. “This world suddenly opened up to me in Auschwitz. I was there for five days doing meditation and tikkun olam [repairing the world]. A Hasidic rabbi sang in Hebrew and Yiddish, and I felt deeply connected with the place.”

Olga enrolled in a course on Yiddish music organized by Warsaw’s Shalom Foundation, eventually deciding it would be her mission to bring Yiddish back to the Jewish people — especially young Ashkenazim unfamiliar with the mamaloshen, or mother tongue, of their ancestors.

Six years ago, Olga underwent an Orthodox conversion to Judaism and moved to Jerusalem.

Later this month, the 40-year-old vocalist will sing at Canada’s two leading Jewish music events: KlezKanada, set for Aug. 20-26 at a Laurentian mountain retreat near Montreal, and the 2018 Ashkenaz Festival, which takes place Aug. 28-Sept. 3 at Toronto’s Harbourfront Centre.

Her repertoire includes Jewish cabaret numbers popular in the period between World War I and II, like the 1936 song “Letstikn shabes,” as well as haunting European tango pieces like “Rivkele” and “Shpil z emir a lidele in yiddish” that were inspired by faraway Argentina, the birthplace of tango, and klezmer music.

“In the 1930s, Warsaw was the capital of European tango, and most of the songwriters and composers of tango were Jewish,” Olga said in an interview at a Tel Aviv cafe. “Jews continued to write tango during the Holocaust. It helped them express their sorrow.”

The genre was kept alive by Polish Jews who immigrated to Palestine during and after the war, writing Hebrew lyrics to their original pieces.

“Here, they composed love tangos, not for women but for the land — even before Israel was established,” Olga said. “In the Warsaw Ghetto, there were lots of famous cafes where people used to perform. Some poets were writing cabaret and tango pieces. In the concentration camps, there was also the story of the Gold brothers, who had their own orchestra. One ran away to the East and arrived to Palestine. The other didn’t survive.”

In the prewar years, a Warsaw tavern run by Josef Ladowski — nicknamed “Fat Josl” — became a popular hangout for Jews both rich and poor. The lounge, which came alive at around 2 a.m., became the subject of a ballad, “Bal u starego Joska” (A Ball at Fat Josl’s). The popular Canadian jazz pianist Ron Davis will be onstage when Olga belts out that song in Toronto later this month in memory of the grandfather Davis never met.

Joining them will be Polish band members Hadrian Tabecki on piano, Grzegorz Bożewicz on bandoneon and Piotr Malicki on guitar. None are Jewish.

The second concert, Jewish Polesye, is dedicated to the Jewish folksinger Mariam Nirenberg, who was born in Poland’s borderlands and immigrated to Toronto in the early 1930s. Nirenberg’s grandson and other family members will be present.

Olga, the mother of two small children, has performed in Vancouver, at New York’s Lincoln Center and in Berkeley, California.

“My most moving concert was for Shoah survivors in Berkeley,” she said. “They were crying. They didn’t want to leave.”

In perhaps a sad irony, Poland’s most famous Yiddish tango singer no longer performs Jewish music in Israel — mainly because so few Israelis are interested.

“My mission to spread Yiddish around Israel failed completely,” Olga said. “For most Israelis, Yiddish music is connected to the Shoah and with the haredi Orthodox world.”

Even her own husband, Shlomi, who is of Kurdish descent, can’t stand Yiddish, she said, noting that many Sephardim, or Jews of North African and Middle Eastern descent, associate Yiddish with European shtetl dwellers.

“For Sephardim, Yiddish is the essence of the Diaspora,” she said laughing. “It’s like an illness.”

On the other hand, Olga said, Americans Jews appreciate klezmer even if they can’t always follow the lyrics.

“When I was in America, I felt like a star,” she said.

Olga has also performed in the Czech Republic, Germany, Russia and Slovakia.

Next year, Olga would like to begin offering musical tours of Israel, pairing biblical sites such as Qumran with traditional Jewish songs that reference those places. She’d also like to visit Buenos Aires and immerse herself in the world of traditional Argentine tango.

But for now, the queen of Yiddish tango spends most of her time performing in Poland, especially at World War II-related commemorations for various towns and cities. And her devout Catholic family — while celebrating Easter and putting up a Christmas tree every year — has welcomed Olga’s new Jewish identity.

“They accept me,” she said. “When I visit Warsaw, my mother even buys chicken from the kosher market.”

(This article was sponsored by and produced in partnership with the Polish Cultural Institute New York, a diplomatic mission of Poland’s Foreign Affairs Ministry that promotes comprehensive knowledge of Poland, Polish history and national heritage. This story was produced by JTA’s native content team.)