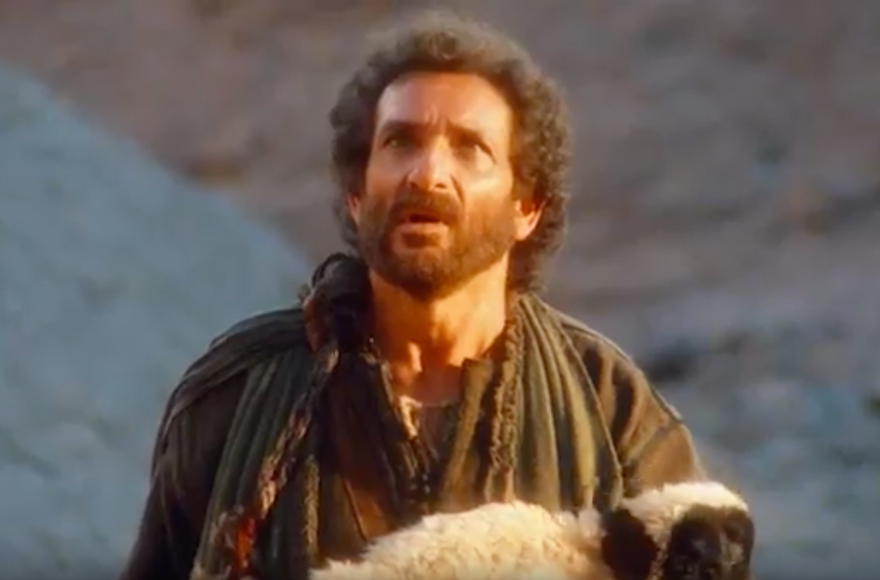 Ben Kingsley as Moses in a 1996 film. (Screenshot from YouTube)
Advertisement

(JTA) — Thirty-five years ago, British actor Ben Kingsley — born Krishna Bhanji — won an Academy Award for his breakout portrayal of Mahatma Gandhi in the epic film that bore Gandhi’s name. Next week, viewers across the country will see Kingsley, 74, play a slightly less peaceful figure: the infamous Nazi and Holocaust architect Adolf Eichmann. He’s one of the stars of “Operation Finale,” which depicts Eichmann’s dramatic 1960 capture and his return to Israel to stand trial.

But between “Gandhi” and the new movie, Sir Ben (Queen Elizabeth II made him a knight in 2002), has played a number of notable Jewish roles. The list below is not comprehensive (he has also played a Mossad agent and Fagin from “Oliver Twist,” for instance), but these are five of the most memorable Jewish moments from Kingsley’s long career.

Wiesenthal, the famed Nazi hunter (he died in 2005), phoned Kingsley himself to ask him to take the role in this HBO production, for which Kingsley received an Emmy nomination. The two men established a close relationship.

“I loved him dearly,” Kingsley recalled when speaking of Wiesenthal as recently as this month while he was out promoting “Operation Finale.”

In this biopic of convicted racketeer Benjamin “Bugsy” Siegel (who was Jewish), Kingsley portrayed Siegel’s notorious associate Meyer Lansky (also Jewish) — and again was nominated for an Oscar, this time in a supporting role category.

“In every movie and television show featuring Grandpa,” wrote Meyer Lansky II, Lansky’s grandson and namesake, “I listen for the voice, the inflection, and the vocabulary. I look for physical characteristics, the tailored wardrobe, and the Dunhill cigarette case.” In Kingsley’s rendering, the younger Lansky discerned embodiments of his grandfather’s “directness and firm logic, visible organization, and impeccable attire with attitude.”

In a film that won seven Oscars and ostensibly shaped America’s perception of the Holocaust, Kingsley played the real-life Jewish accountant who helped German businessman Oskar Schindler save more than 1,000 Jews during World War II. Behind the scenes, a number of anti-Semitic incidents occurred during filming. In one case, it was reported that Kingsley “stood up for an Israeli actor in a bar after a German-speaking man approached and asked if he was a Jew.”

In a sense, Kingsley tackled two roles in this film. According to the Los Angeles Times, when it was suggested that having played Moses, Kingsley might well next play God, the actor noted, “Oh, but in ‘Moses,’ I played God, too. For the scene in which Moses sees the burning bush and first hears the voice of God, it occurred to me that in those circumstances you would hear God speaking in your own voice. So I asked [director] Roger Young to let God’s voice be mine. He distorted it and put it through various filters, but it’s my voice, my rhythms.”

After having kept a photograph of Anne Frank with him during the filming of “Schindler’s List,” Kingsley has said that he was “thrilled beyond measure” when he was asked to play the young diarist’s father in this acclaimed two-part ABC television miniseries — a role for which he again received an Emmy nomination and won a Screen Actors Guild Award — “because I already loved her.”