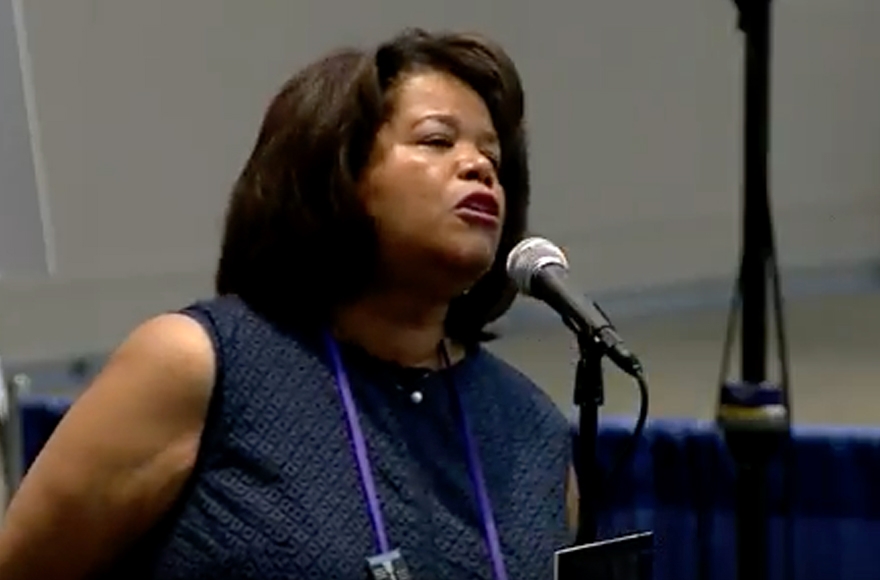 Bishop Gayle Harris is a senior clergywoman in the Episcopal Church of Massachusetts. (Screenshot from Youtube)
Advertisement

(JTA) — A senior clergywoman in the Episcopal Church of Massachusetts has apologized for comments accusing Israel of fabricated atrocities.

During a speech last month to the church’s General Convention, Bishop Suffragen Gayle Harris claimed that she had witnessed Israeli security forces arrest a 3-year-old on the Temple Mount and shoot a 15-year-old in the back 10 times after making a comment to a group of soldiers. Harris, the second-highest ranking Episcopal official in the state, later clarified that she had heard the stories from a third party.

“I was there a couple of years ago on the Temple Mount,” Harris said. “A three-year-old little boy, a Palestinian with his mother, was bouncing a rubber ball. The ball happened to sort of roll away from him and go over the side down to the Western Wall otherwise known as the Wailing Wall. And immediately, Israeli soldiers camp up to the Temple Mount and attempted to put handcuffs on a three-year-old little boy — for bouncing a rubber ball.”

In a statement last month accusing the church of coming “close to a blood libel,” the Simon Wiesenthal Center noted that there is a high wall surrounding the Temple Mount, making it unlikely that such a small child would be able to bounce a ball high enough for it to reach the Jewish prayer-goers below.”

A video from the Boston-based Committee for Accuracy in Middle East Reporting in America, or CAMERA, helped drive the story, and it wrote a letter to Harris. CAMERA also referred to the accusations as a blood libel.

In the second case, Harris described how a teenager was walking down the street and asked a group of soldiers a question that they found offensive.

Harris’ comments generated widespread outrage among members of the local Jewish community. After vocal opposition from the The Jewish Community Relations Council of Greater Boston and the local branch of the American Jewish Committee, she issued a statement clarifying her remarks.

“For my entire adult life I have maintained that the State of Israel must exist, with safe borders and the establishment of respectful relationships by and with neighboring countries,” she said. “I have strongly condemned the actions of extremists and bigots against Jewish people in the United States.

“After reviewing my words in the House of Bishops from a transcription, I now acknowledge that I reported stories which I had heard and unintentionally framed them as though I had personally witnessed the alleged events. I sincerely apologize. I now understand how the framing of my words could and did give the wrong impression. The fault is solely mine. I acknowledge also that I did not take the opportunity to verify these stories. I was speaking from my passion for justice for all people, but I was repeating what I received secondhand. I was ill-advised to repeat the stories without verification, and I apologize for doing so.”

In an accompanying statement, Bishop Alan Gates, the head of the the diocese and Harris’ direct superior, acknowledged that “for Christian leaders to relate unsubstantiated accounts of Israeli violence awakens traumatic memory of a deep history of inciting hostility and violence against Jews — a history the echoes of which are heard alarmingly in our own day.”

Reaffirming the church’s “condemnation of violence on all sides of the Palestinian-Israeli conflict,” Gates said that he grieved over the “damage done to our relationships with Jewish friends and colleagues in Massachusetts, and rededicate ourselves to those partnerships, in which we are grateful to face complexities together.”

In response, the JCRC wrote on Facebook that it “welcome[ed] this response from Bishop Harris and we look forward to continued engagement with her, Bishop Gates, and the Episcopal Diocese of MA as we seek to advance our shared goal of a two-state solution.”

“We had a very open conversation. It led to some important soul-searching,” JCRC deputy director Nahma Nadich told the Boston Globe. “We made sure to have a conversation directly with them, and the apology was issued the next day. We wanted them to understand the centuries of accusations, unfounded accusations of violence, which spurred more violence against Jews.”

The meeting, which allowed the two sides to “repair any rupture in our relationship,” was “not the end of the conversation,” she said.

In a statement emailed to the press, the Simon Wiesenthal Center welcomed Harris’ apology as a “first step.”

“Bishop Harris now admits that she was not there, but uncritically repeated what she had heard from others,” Cooper said. “Unfortunately, she has not yet brought herself to state that the two stories were in fact ludicrous fabrications presented to her by Palestinians that defamed the Jewish State. Will she and her Church denounce such a blood libel?”