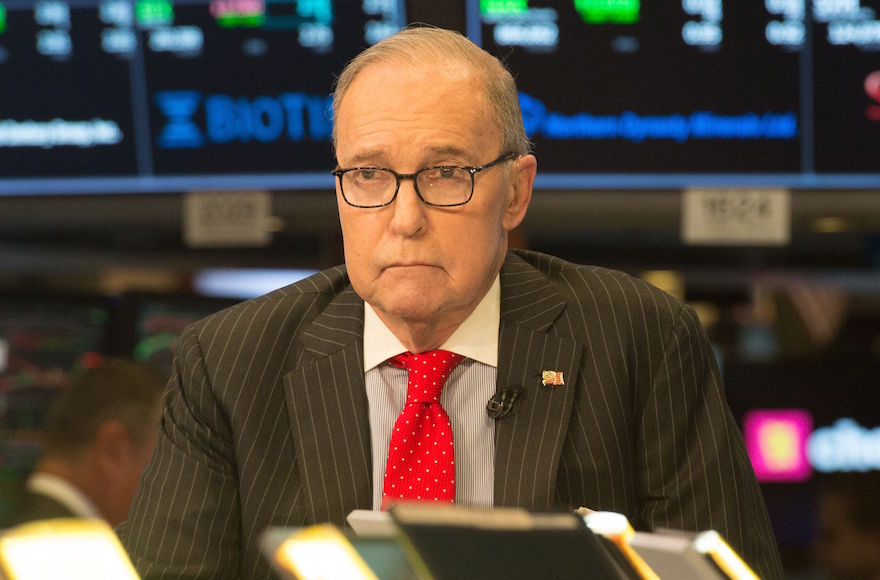 Larry Kudlow on the set of CNBC at the closing bell of the Dow Industrial Average at the New York Stock Exchange in New York, March 8, 2018. (Bryan R. Smith/AFP/Getty Images)
Advertisement

(JTA) — President Donald Trump’s economic adviser has apologized for inviting a friend who publishes work by white nationalists to a party in his home.

Larry Kudlow, director of the National Economic Council, said Tuesday that he was unaware of the views of Peter Brimelow, publisher of the anti-immigration website VDare, when he invited him, telling The Washington Post that if he had “known this, we would never have invited him. I’m disappointed and saddened to hear about it.”

In an interview with The Harvard Crimson in 2016, Brimelow denied holding white nationalist views but admitted that “we certainly publish a few writers I would regard as ‘white nationalist’ in that they stand up for whites just as Zionists, Black Nationalists do for Jews, Blacks etc.” VDare’s contributors include Kevin Macdonald, a former psychology professor at Cal State Long Beach, who has written that the collective activity of the Jews is “control of economic resources and political power,” and that “overwhelming Jewish support for non-traditional immigration … has the effect of weakening America’s historic white majority.”

Brimelow and Kudlow have known each other for almost 40 years.

Such views are “a side of Peter that I don’t know, and I totally, utterly disagree with that point of view and have my whole life. I’m a civil rights Republican,” Kudlow said.

Born Jewish, Kudlow later converted to Catholicism and is affiliated with the Opus Dei movement.

Kudlow’s party was held the day after the White House fired policy aide and speechwriter Darren Beattie after it emerged that he had attended a conference with Brimelow and other VDare writers.

Trump has struggled to shake off accusations of racism. After last year’s clashes between white supremacists and counterdemonstrators that left one dead in Charlottesville, Virginia, Trump issued a statement saying there were “ very fine people, on both sides.”

The Trump administration has taken a firm stance against immigration, both legal and illegal. Earlier this month, the uncle of Trump advisor Stephen Miller, an immigration hardliner, called him an “immigration hypocrite” for advocating policies which he said would have condemned his own Jewish family to death if they had been enacted a century ago.