Dear rabbis: Take a stand in your High Holiday sermons 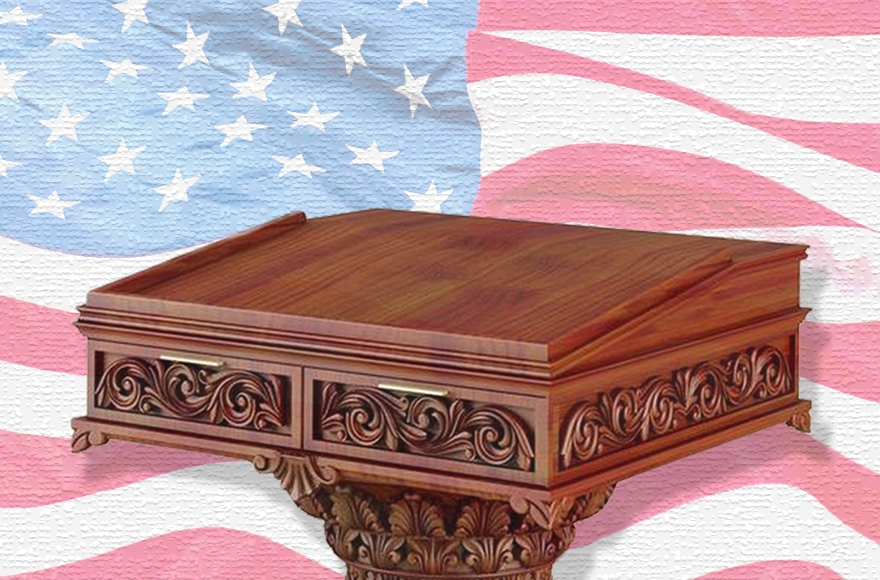 Jan Zauzmer is advocating for rabbis to bring politics to the bimah. (Illustration by Charles Dunst/JTA; photo credit: Ahuva)
Advertisement

(JTA) — Last year, I wrote an essay urging rabbis to deliver a High Holiday sermon that was relevant to the political moment.

“I understand the typical view that it is better for rabbis to speak to higher values than to take sides in the rough-and-tumble over political issues,” I wrote. “But as we all know, this is no ordinary time.”

My essay, appearing shortly after Charlottesville, was surprisingly controversial. Dozens of readers somehow compartmentalized politics and ethics, and commented that they preferred their religious services to be a haven from politics.

But we aren’t ostriches. We do not have that luxury in today’s grim world. Even if we could shield ourselves by burying our heads in the synagogue sand, we as Jews and as decent people are called upon to face the horrors around us and try to fix them.

The majestic Mah Tovu prayer, “How goodly are your tents, O Jacob,” is reduced to a question rather than an exclamation if we hide from ills in our midst. As the Mother Abbess said about another house of worship in my favorite movie, “These walls were not built to shut out problems.”

With the approach of 5779, I have a fresh concern: walking into a synagogue only to hear a sermon about civil discourse. The least offensive, most palatable political message is “Why can’t we all get along?”

In an age in which the president of the United States has ripped civil discourse to shreds and replaced it with rancorous schisms, Lord knows it would be nice to mend the societal fabric and patch up our rifts.

Well-meaning people across the political spectrum share that wish. I recently attended a celebration where a minister gave a lovely prayer in honor of his machuten, his child’s Jewish father-in-law. Proud that their friendship has withstood their political differences, he bid the guests to model that example of civil discourse in a divided country.

That’s a moving sentiment. It feels bad to unfriend friends, classmates and co-workers. We enjoy mixing with a diverse array of people.

But we can’t even chitchat about the weather or sports nowadays without bucking up against politics. A heat wave reminds us of climate change and the shanda of withdrawing from the Paris agreement. The Philadelphia Eagles won the Super Bowl but lost the invitation to the White House.

Even neutral topics aren’t neutral anymore. We feel blue and they see red.

In these extraordinary circumstances, preaching only about “building bridges instead of walls” is the safe sermon. And it’s not wrong. Communication is worthwhile.

But please don’t stop there! All across America, people are witnessing destructive deeds and corrosive concepts pushed and protected by the current administration. We don’t have time to see whether civil discourse alone will solve the slew of problems wrought by racism, greed and xenophobia.

For most congregants, speaking out is confined to rants to like-minded family members, chance conversations at the oneg, therapeutic Facebook posts that reach a few dozen friends, clever tweets and retweets that rack up single-digit likes.

Regardless of how polished our prose or heartfelt our appeal, our following is small. But you, rabbis — you have a big audience, you have a microphone, you have a bully pulpit, you have a bimah. What an opportunity to address your flock.

Right in the nick of time, too. The shofar in 5779 sounds exactly when we need it. Your largest annual attendance falls smack-dab in the lead-up to the midterm elections.

On the holiest of days, offer us the Jewish lens through which to view the midterms. Don’t tell us whom to vote for — tell us what to vote for.

While in normal times finding common ground is a noble Jewish value, these are not normal times. In an act of bimah bravery, say that Jewish values share no common ground with policies and predilections that separate children from their parents at the border, denigrate the free press, befriend enemies and antagonize allies, cut back on health care, neglect the environment, dismantle protections for minorities, move backwards on LGBTQ rights, mistreat women, ride shotgun for the gun lobby, roll back safety nets for the poor, and so cruelly on and so painfully forth. In Tevye’s famous words, “There is no other hand.”

At this uniquely ugly juncture, when the scales have tipped from reasonable minds can differ to no moral equivalence, command us to get to work, not just to get along. Inspire us to pursue acts of tikkun olam with gusto.

When a politician blithely reads “The Art of the Deal” to his child in a campaign ad, tell us to read stories with Jewish values to our children. When frenzied crowds rally around anti-media chants, prod us to rally around Jewish advocacy organizations like the ADL, RAC and HIAS. When the current president finds “some very fine people on both sides” at a neo-Nazi march, call our attention to the magnificent dictum of the first president in a letter to the Jews in 1790: “to bigotry no sanction, to persecution no assistance.”

Armed with Judaism’s ethical heritage, you can rouse us to take a stand at the polls against those who support, or who don’t prevent, today’s scandalously unethical practices. Charge us to vote not as self-interested but as interested selves.

Give us a refresher course on why Jews in particular cherish the right to vote. Wax poetic about how our forebears fled lands where they didn’t have that right. Put in plain English, sprinkled with a bit of Hebrew, why it is intrinsically Jewish to oppose voter suppression in all its forms.

Better still, encourage us not to go to the polls alone. Paint a picture of a voting booth filled to the brim with those who came before us, those who are in our midst and those who will succeed us. We have a crowd to schlep with us, figuratively for sure and literally when possible: our ancestral immigrants, who came here in pursuit of the blessings of democracy; our neighbors, who may need our support to vote in this democracy; and our children, who are the inheritors of whatever remains of our democracy.

Don’t aim not to offend anyone — offend us all. Boldly tell us to do better. Above all, counsel us that Trumpism finds no sanctuary in a Jewish sanctuary.

The message from the bimah on this Jewish New Year must be to repair not only our broken relationships but also our broken world. Now is the time to hit the ground running, all the way from common ground to higher ground.

(Jan Zauzmer is a past president of a large Union of Reform Judaism congregation in Pennsylvania, and her writings on the intersection of politics and Jewish ethics have appeared in Kveller, Moment Magazine, ReformJudaism.org, Patheos, and Lilith. She can be found at janzauzmer@gmail.com and @JanZauzmer.)