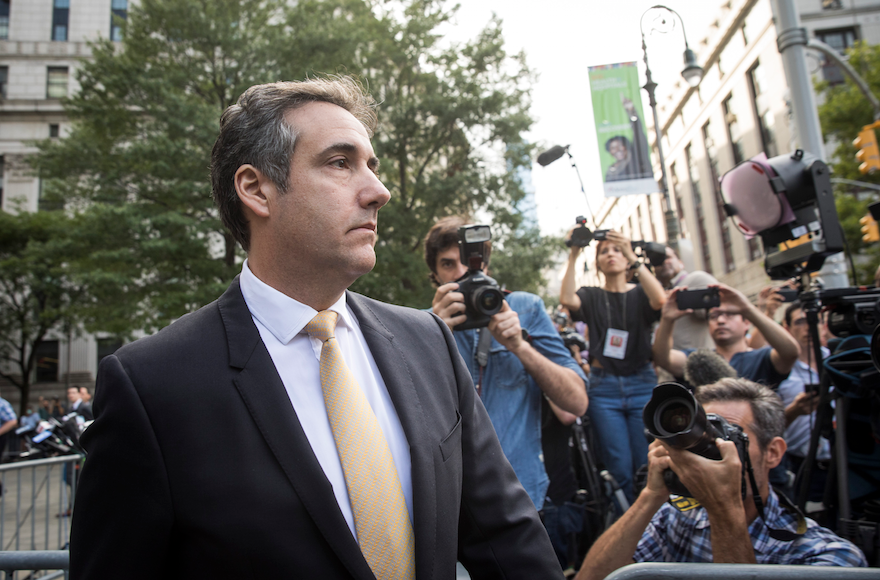 (JTA) — Michael Cohen’s decision to turn on one-time patron Donald Trump was partly motivated by a conversation with his father, a Holocaust survivor.

Maurice Cohen reportedly told his son that he did not survive the Nazi genocide to have the family name dragged through the mud by Trump, The Wall Street Journal reported.

On Tuesday, Michael Cohen, the president’s longtime attorney, testified in federal court that his former boss had directed him to pay off two women with whom Trump allegedly had extramarital affairs. Cohen’s assertion that Trump ordered the payments is seen as creating legal and political jeopardy for the president.

Cohen referenced his father’s wartime experiences in June when he quit a senior position on the Republican National Committee, citing his opposition to Trump’s immigration policies and invoking the Holocaust experience of his father.

“As the son of a Polish Holocaust survivor, the images and sounds of this family separation policy is heart wrenching,” Cohen wrote at the time. “While I strongly support measures that will secure our porous borders, children should never be used as bargaining chips.” Cohen was deputy chairman of the RNC’s Finance Committee.

Cohen reportedly felt betrayed by Trump, who had not reached out to him after federal authorities raided his properties for information related to the payoffs and stopped paying his legal bills.

Trump responded to Cohen’s testimony this week by tweeting that “if anyone is looking for a good lawyer, I would strongly suggest that you don’t retain the services of Michael Cohen!”

If anyone is looking for a good lawyer, I would strongly suggest that you don’t retain the services of Michael Cohen!

The president also claimed that the payments did not constitute a crime and that “President Obama had a big campaign finance violation and it was easily settled!”

In 2013, the Federal Election Commission fined Obama’s presidential campaign for failing to report a number of campaign contributions and not returning campaign donations within the required time frame. Neither is a federal crime.