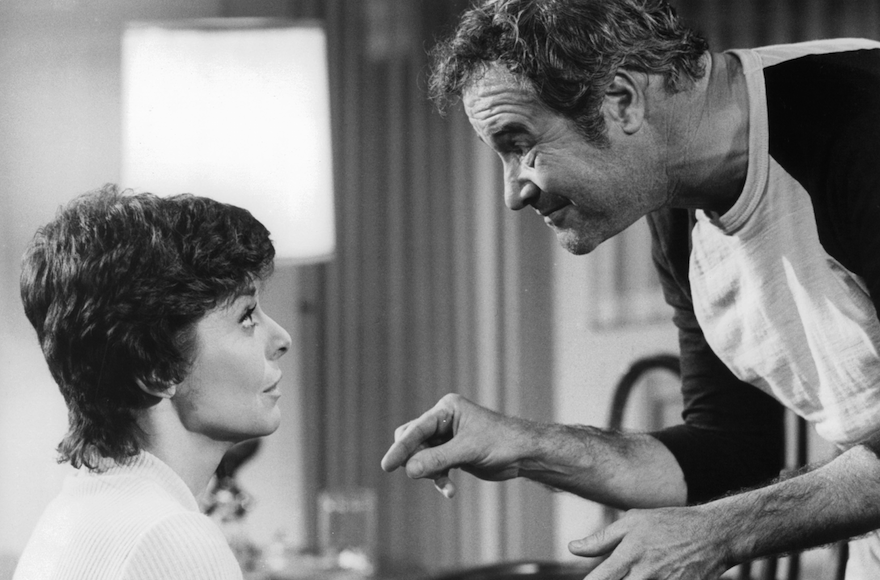 (JTA) — I never thought of Neil Simon as a political writer, unless you agree that all politics are personal. “The Odd Couple” got a lot of its juice from the nascent feminist movement, I suppose, but the typical Simon character would rather rant about the weather and the traffic than the economy or the welfare system.

“I don’t write social and political plays because I’ve always thought the family was the microcosm of what goes on in the world,” Simon said in his 1992 Paris Review interview.

But then I decided to watch “The Prisoner of Second Avenue” as a tribute to the legendary playwright, who died Sunday at age 91. It was my first time seeing the 1975 film adaptation of a play that ran for a respectable 789 performances on Broadway from 1971 to 1973. Jack Lemmon plays Mel, a depressed, 48-year-old ad executive recently fired from his job. Anne Bancroft is his doting stay-at-home wife, Edna, who goes back to work so they can make ends meet. It’s set during a heat wave in a smoggy, gritty New York, with obligatory jokes about getting mugged in Central Park and the “junkies” who are always ready to pounce.

But “Second Avenue” takes a dark turn that sets it apart from most of the Simon hits I am familiar with. Stuck at home with no job prospects, Lemmon’s character begins to break down, taunting his loving wife, skulking about his apartment in pajamas and bathrobe, stealing newspapers and milk from his neighbors.

And then, seething that Edna has become the family’s bread-winner, Mel goes on a rant that, four decades later, feels positively eerie in the way it anticipates the paranoid style of the internet and talk radio, the anger of displaced white men and the disenchantment of the middle-class — essentially, the forces that helped land Donald Trump the presidency.

Here’s a taste, from the screenplay:

Edna: I don’t know why. Because you can’t find a decent job.

Mel: That’s why? That’s why? You haven’t the slightest inkling of what’s really going on, do you? You are so naive, it’s ridiculous … You have no suspicion of the truth.

And from there he is off to the races, describing “The Plot” — a “social, economic and political plot to undermine the working classes of this country.” It’s practically invisible, he says of “The Plot,” and “maybe only a handful of people in this whole country know about it.” It explains why 6.7 percent of the working class is unemployed, why wages are low and inflation out of control.

And what’s the goal of “The Plot”?

“They’re after you, our kids, my family, every one of our friends,” he says. “They’re after the cops, hippies, the government, women’s lib, the blacks, the fags, the whole military complex and even more.”

Mel has no proof for this plot, because “they” won’t let him get to the bottom of it. Ultimately, all he can blame is “the deterioration of the spirit of man. Man undermining himself, causing a self-willed, self-imposed, self-evident self-destruction.”

Of course, Simon plays this paranoia for laughs, but 43 years later the joke is on us. Mel’s “Plot” is straight out of QAnon, the right-wing conspiracy theory whose followers show up at Trump rallies. It’s the far-right grumbling about the “deep state,” a cabal of civil servants who operate independently of elected officials in Washington. It’s Trump’s closing presidential campaign ad, which asserted that “Hillary Clinton meets in secret with international banks to plot the destruction of U.S. sovereignty in order to enrich these global financial powers, her special interest friends and her donors.”

Simon wrote the play during a recession, and the movie came out after Watergate and the 1973 oil crisis. In 1974 the country experienced one of its worst economic crises, with high unemployment and soaring inflation. Nixon had recently resigned under the threat of impeachment, and the country was still feeling a deep sense of disillusionment and distrust with politicians and the government.

This was also New York on the brink of bankruptcy, when living on the Upper East Side was neither an extravagance nor a guarantee that thieves wouldn’t ransack your apartment in broad daylight. Nixon was gone, but the city still felt like the crime-plagued hellholes he described in his cynical, successful appeals to the country’s “silent majority” — a phrase and tactic Trump revived on the campaign trail.

A number of pundits have suggested that Trump rose to power not just with the support of poor whites, but of white middle-class voters who felt their prerogatives were disappearing.

These bourgeois “dispossessed” were the subject of a study released in May by Diana C. Mutz of the University of Pennsylvania. She studied polling data to conclude that the key motivation underlying support for Trump was not economic anxiety but the feeling among “high-status” groups — men, Christians, and whites — that their perceived status was under threat. The high-status groups experience these threats psychologically. When confronted with evidence of racial progress and increasing diversity, for example, “whites feel threatened and experience lower levels of self-worth relative to a control group.” Globalization also “contributed to a sense that white Americans are under siege by … engines of change.”

Mel and Edna aren’t broke — she has her job, they talk of savings, and Mel’s brother is happy to pitch in. Mel’s complaints are not about money but about status: “You’ve never walked into your building and had an idiot doorman with beer breath giggling at you because he’s working,” he complains to Edna. It’s perhaps telling that on his visit to the unemployment office, the clerk behind the desk is a black woman, and Mel’s sense of humiliation is obvious and profound.

“The Prisoner of  Second Avenue” didn’t predict how the Jewish middle- and upper-classes would vote in 2016. Mel and Edna’s voting district (Yorkville) went for Clinton over Trump by a margin of 79-18. New York City would eventually get over its own breakdown of the 1970s, although it, like Mel, would need a few more crises, some professional help and a few lucky breaks to get there. Let’s assume that Mel got a new job, and the two moved into a comfortable dotage. Essentially liberal, they’d go on to vote Democratic in most races (but siding with a law-and-order guy like Rudy Giuliani when he ran for mayor, and perhaps voting for Ronald Reagan when Jimmy Carter let them down on Israel and the whole malaise thing).

But what Simon did get right was a strain of anger, born of economic anxiety and the fear among whites that they are losing their privileged status, that would animate a large segment of Trump’s “base.” He also portrayed the insidious attraction of conspiracy theories to explain forces beyond our control. As a feverish Mel explains to Edna, in a line that reads like the latest tweet from your least favorite alt-right troll: “If you’re too lazy, ignorant and uninformed to find out what is going on then you deserve exactly what you’re gonna get.”

Neil Simon got us right. That’s what geniuses do.