LYUBAVICHI, Russia (JTA) — At the age of 92, Valentina Prilashkevitch and her twin sister, Claudia, need to cautiously negotiate the dirt road leading to their wooden home in this tiny village near the Belarus border.

In winter, frost could easily mean a broken hip for the twins. The risk of falling returns in summer, when the swampy earth turns to soft powder.

Asphalt is one of many basic amenities missing from this horsefly-infested village of 200. Its dilapidated houses lack electricity, running water, central heating, indoor toilets and a steady supply of cooking gas.

Some members of the graying population here are so poor that they still use horse-drawn vehicles and rely on backyard farming for sustenance.

But things are beginning to turn around for Prilashkevitch and her neighbors because their village is the cradle and namesake of Chabad-Lubavitch – one of the largest and most influential Hasidic movements in Judaism.

In recent years, the village has started to attract hundreds of visitors every month, prompting the local authorities to undertake what in local terms is a massive investment in infrastructure with the aim of cultivating an unlikely source of income: Western tourism.

The Prilashkevitch sisters, for their part, are about to have their street paved for the first time since the village was established. The reason? It leads to an ancient Jewish cemetery.

“It is all thanks to the Jews,” said Valentina Prilashkevitch’s grandson, Sergey Levashov.

Standing shirtless amid the chickens roaming his grandmother’s yard, he said “I think it’s a very good that this place is beginning to become known internationally for its tradition of coexistence with the Jews. More good things can come to us for it.”

More good things are already happening to Lyubavichi, according to Yuri Ivashkin, the mayor of the district where the village is located.

“A deal to lay down cooking gas pipes was signed this summer, there’s a new hotel that’s about to be built here. Come back in five years. You won’t recognize this place,” he told JTA . 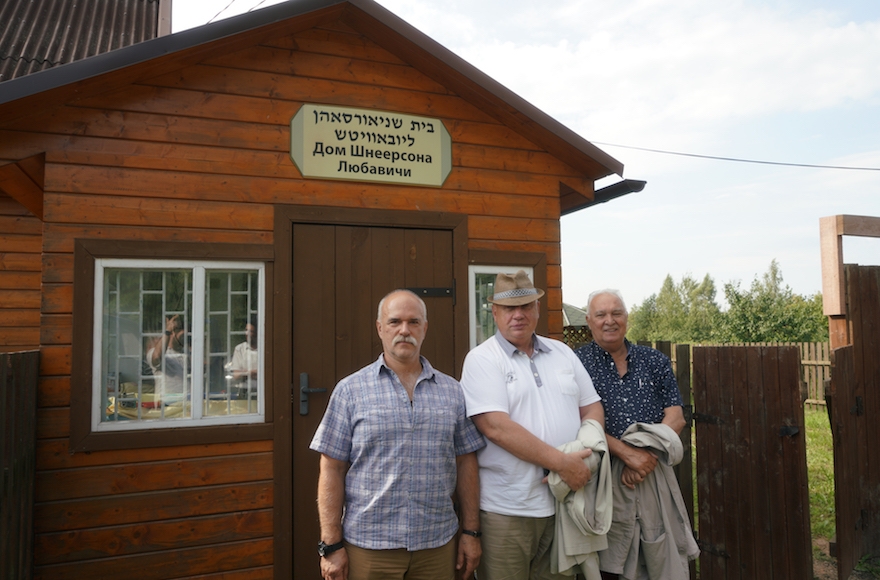 Ivashkin, who lives in the nearby city of Rudnya, came to Lyubavichi on Sunday to attend the dedication of a fence around another Jewish cemetery. It contains the remains of two 19th-century rabbis, Menachem Mendel Schneersohn and Shmuel Schneersohn — respectively the third and the fourth great sages of the Chabad movement, which was based here for a century before World War I. Chabad has only had seven supreme spiritual leaders.

The fencing was a preservation project headed by the European Jewish Cemeteries Initiative, or ESJF. The nonprofit organization has completed similar projects in 102 cemeteries across Eastern Europe with funding from the German government.

“Initiatives like these are vital because of neglect, economic and agricultural development, and vandalism,” said Rabbi Isaac Schapira, the founder and chairman of the ESJF board.

Separately, Chabad has undertaken another project at the cemetery — to pull up headstones swallowed by the marshy ground.

While the cemetery certainly attracts some pilgrims, the real engine behind the growth in Jewish tourism is Chabad’s 2008 opening of an information center. About 12 people are based permanently at the center, which is called Hatzer Raboteinu Nesieinu Belubavitch.

That fenced compound, where in 2016 about 500 Chabad rabbis from across the former Soviet Union convened for a conference, is located in a part of Lyubavichi where the town’s Chabad sages had once lived with their families and disciples.

Lyubavichi was founded approximately 500 years ago, according to some accounts, by a Rabbi Meir who named it in reference to his people’s love (“lyubov” in Russian) of God. For Jews in czarist Russia, it was prime real estate because it was one of the points closest to Moscow within the Pale of Settlement – the western provinces to which Jews were restricted until the communist revolution of 1917.

Hundreds of them settled in Lyubavichi, which became a major shtetl – Yiddish for a predominantly Jewish town. In the early 19th century, Lyubavichi became home to Dovber Schneuri – Chabad’s second supreme spiritual leader, or admor. 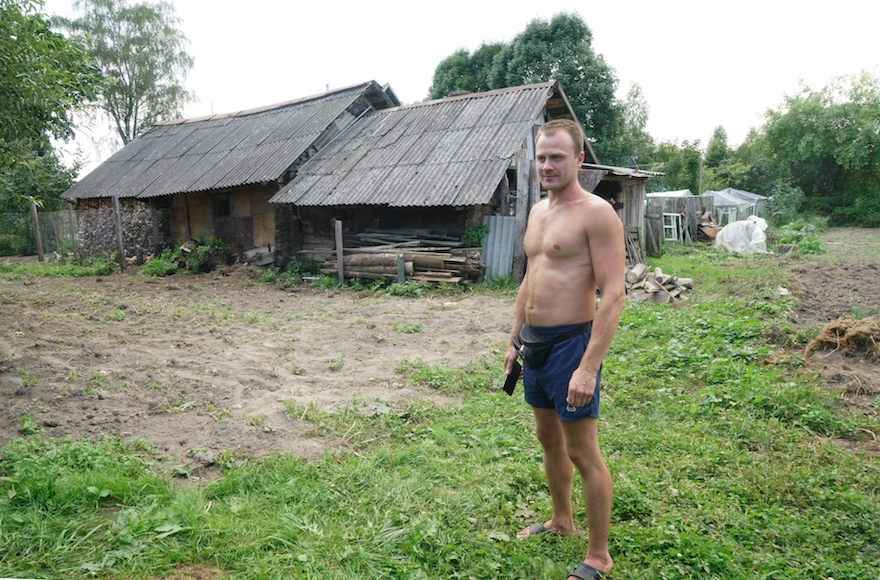 He turned Lyubavichi into a hub of Jewish learning. Jews from across Eastern Europe would come to seek advice and guidance, many of them settling to join the hard core of the Chabad movement, according to the late historian Moshe Tzinovitch, who published an essay about the town’s history in 1943.

But Chabad followers fled the town in World War I as the German army advanced on it. Hundreds of Jews remained in the interwar period until the Nazis killed them in 1941. The center of the movement shifted from Russia to Poland and, following World War II, to the United States.

Few Jews visited this place under communism, when it was behind the Iron Curtain. But the visitors began trickling in during the early 1990s. By 2000, the town was seeing dozens of visitors each month. Since then, the number of visitors to Lyubavichi has climbed to about 10,000 annually, according to Gavriel Gordon, a Chabad rabbi tasked with preserving the movement’s heritage sites.

Gordon said plans are underway to restore, based on archived maps, a part of the original shtetl, whose houses were taken apart and used for construction during communism. 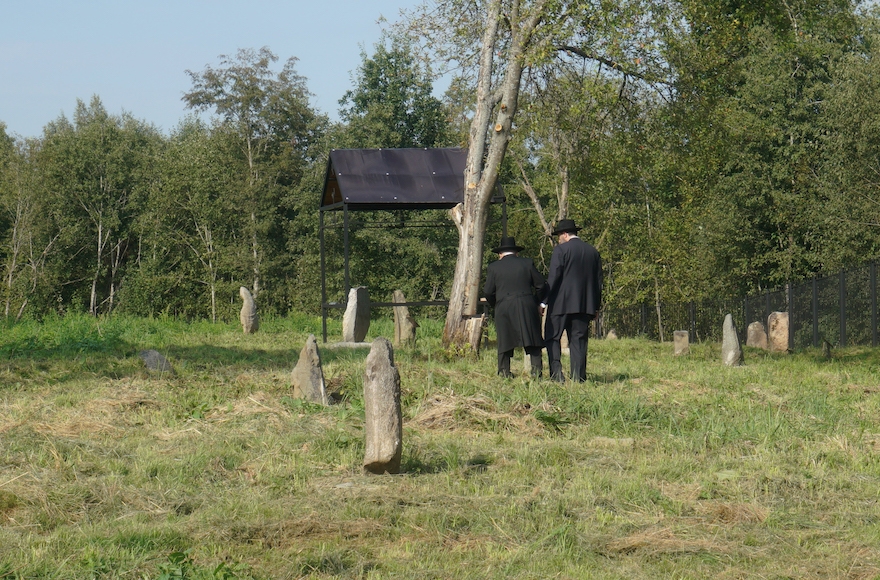 Visitors explore one of the Jewish cemeteries in Lyubavichi, Aug. 26, 2018. (Cnaan Liphshiz)

For now, though, the most authentic characteristic of shtetl life seems to be the horse-drawn carriages used by some of the villagers. They regularly come out to greet large groups of Jews, offering short rides and selfie moments for tips.

In recent years the village changed the names of some of its roads to highlight its Jewish heritage. The main road is now called Derech Lubavitch, Hebrew for Lubavitch Way. Another is now Chabad Street. The Prilashkevitch twins live on Schneersohn Road, carrying the last name of five generations of Chabad leaders.

Some of the village’s houses boast a fresh coat of paint, including bright yellow, pink and green – a common scheme in Belarus and western Russia. But even newly painted houses here are so old and poorly maintained that they lean outward at strange angles, seemingly ready to collapse.

The residents collect water in buckets from faucets, or water points, on main roads.

Many of the visitors to Lyubavichi today are devoted Chabadniks.

One is Jehoshua Raskin. The Russia-born rabbi moved to Israel in 1967, only to return to Russia after communism to “make Judaism great again” there, as he put it. He has one son serving as an emissary of Chabad in Uganda, another in Cyprus and a third in Budapest.

Today, the 70-year-old Raskin travels across Russia and beyond giving lectures about Judaism to far-flung Jewish communities.

“I am brought in to give strength to communities from Brazil to Australia,” he said on the six-hour car ride from Moscow to the fence-dedication ceremony, which he said he decided to join at the spur of the moment when a friend told him about it. “Lyubavichi is where I draw that energy. I come whenever I can.”

But even with devotees like Raskin, the number of visitors here is a fraction of the traffic to the site of Europe’s largest Hasidic pilgrimage: the Ukrainian city of Uman, located 500 mile south of Lyubavichi.

About 30,000 visitors, mostly from Israel, arrive in Uman each year on Rosh Hashanah, the Jewish New Year, to visit the grave of Rabbi Nachman, an 18th-century luminary who founded the Breslov Hasidic movement.

But whereas Uman is an established destination, Lyubavichi has yet to realize its potential, said Ivashkin, the district mayor.

“I know Uman. There is no reason why Lyubavichi shouldn’t match and surmount it in terms of attracting Jewish tourism,” he said.

Ivashkin’s favorable attitude to Jewish tourism — a common approach by officials in Russia under President Vladimir Putin — is in and of itself a major difference to the one prevalent in Uman, where many of the city’s 70,000 residents resent the local pilgrimage and the crowds, noise and even crime that it brings.

Uman has seen several protests featuring anti-Semitic rhetoric in recent years, as well as agitation by the xenophobic far right.

This hostility is exacerbated by some rowdy Jewish visitors, but it is unfolding amid a dramatic increase in nationalism and anti-Semitic incidents in Ukraine following a 2014 revolution in which the far right played a prominent role.

By contrast, Lyubavichi has seen almost no anti-Jewish agitation.

Earlier this month, anti-Semitic graffiti appeared on the external wall of the Chabad compound here. But Ivashkin said the suspect in that incident was a man from the city of Murmansk, hundreds of miles north of Lyubavichi.

Russian authorities are quick to punish perpetrators of anti-Semitic hate crimes. Chabad leaders enjoy a high degree of access to Putin, and under him have become the undisputed leading force in Jewish communal life in Russia.

“There are certainly challenges attached to making a place like Lyubavichi a major site for pilgrimage,” said Gordon, the Chabad caretaker. “But it can make a huge contribution to the spirituality of the Jewish people, and to the material situation of this very poor village.”