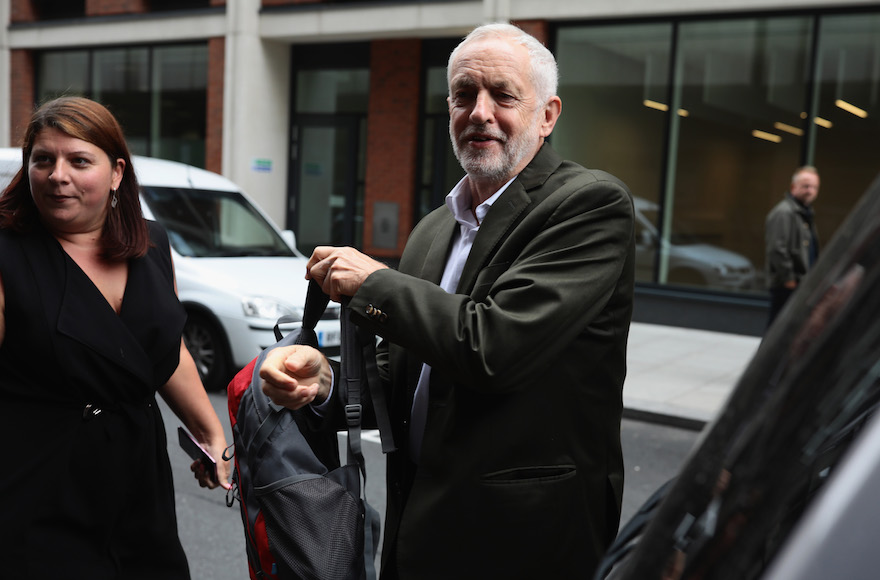 (JTA) — Britain’s Labour Party adopted the internationally accepted definition of anti-Semitism, along with a statement that would allow “freedom of expression” on Israel.

The party’s National Executive Committee approved the full International Holocaust Remembrance Alliance, or IHRA, definition and all its examples, as well as the additional clause on Israel, in a vote Tuesday that had been deferred since earlier in the summer.

The resolution by the Labour leadership said it adopted “all of the IHRA examples of antisemitism” while adding a statement that ensures it will not “in any way undermine freedom of expression on Israel or the rights of the Palestinians.”

“It is appalling that the Labour party has once again ignored the view clearly and repeatedly stated by the Jewish community: that it should adopt the full IHRA definition without additions, omissions or caveats,” Gerber said in a statement.

The statement also said: A ‘freedom of expression on Israel’ clause is unnecessary and totally undermines the other examples the party has supposedly just adopted. Labour appears determined to provide a safe space for anti-Semites. This decision is a sad reflection on Jeremy Corbyn’s leadership of the party and the culture it has instilled.”

In July, the party had come under fire after its ruling body and leadership endorsed a code of conduct that excluded several of the IHRA examples of anti-Semitism, including accusing Jews of “being more loyal to Israel” than their own country; claiming that Israel’s existence is a “racist endeavor”; applying a “double standard” on Israel; and comparing “contemporary Israeli policy” to that of the Nazis. Party members apparently felt such definitions would chill criticism of Israel.

Labour under Corbyn, a hard-left politician who has called Hezbollah and Hamas his “friends” and is fighting accusations of harboring anti-Semitic sentiments, has come under intense scrutiny in the media over anti-Semitic rhetoric by party members. In 2016, an interparliamentary committee accused Labour of creating a “safe space for those with vile attitudes towards Jewish people.”