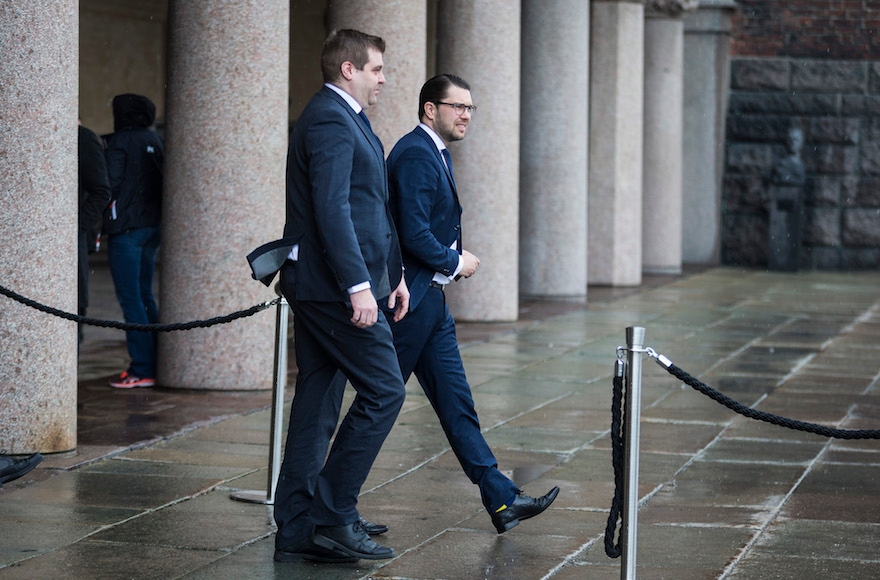 Jimmy Akesson, right, is leader of the Sweden Democrats. He is shown here in Stockholm, April 10, 2017. (Michael Campanella/Getty Images)
Advertisement

Per Olsson, who represents the party on the City Council of Oskarshamn, a coastal Swedish city, earlier this year posted a picture of Frank captioned “coolest Jew in the shower room” on the Russian social network VKontakt, the Expressen daily reported Friday.

The Expressen report was part of a project in which journalists for that daily and the Expo magazine looked into the digital footprint of many politicians from various parties ahead of the country’s general and local elections on Sunday.

Polls show the Sweden Democrats in third place with 18.7 percent of the vote. The party won slightly under 13 percent in the 2014 elections.

The journalists also found anti-Semitic material on the social media accounts of Raghu Jacobsen, who represents the party on the City Council of Stenungsund, in western Sweden.

“As long as Rothschild controls the economy and with the modern slavery on this planet, there will be anti-Semitism. #Jews #israel,” Jacobsen wrote in English in February on Twitter.

One month later he shared a picture of a woman with a milk package and the English-language text: “What is the difference between a cow and the Holocaust? You cannot milk a cow for 70 years.”

Martin Sihlén, representing the Sweden Democrats in Örkelljunga, in Sweden’s south, wrote on Facebook that “Hitler wasn’t so bad” and he “did not lie about Jews.” He also wrote that “international Jewry is thirsting for destroying Europe. It was ultimately not Germany who started the Second World War, it was the Jews.”

Anne Frank, a German Jew who wrote a famous diary while hiding for two years from the Nazis, died of typhus in 1945 at the Bergen-Belsen concentration camp. Among the 6 million Jewish Holocaust victims, the Nazis and their collaborators killed more than half in gas chambers — some disguised as shower rooms.