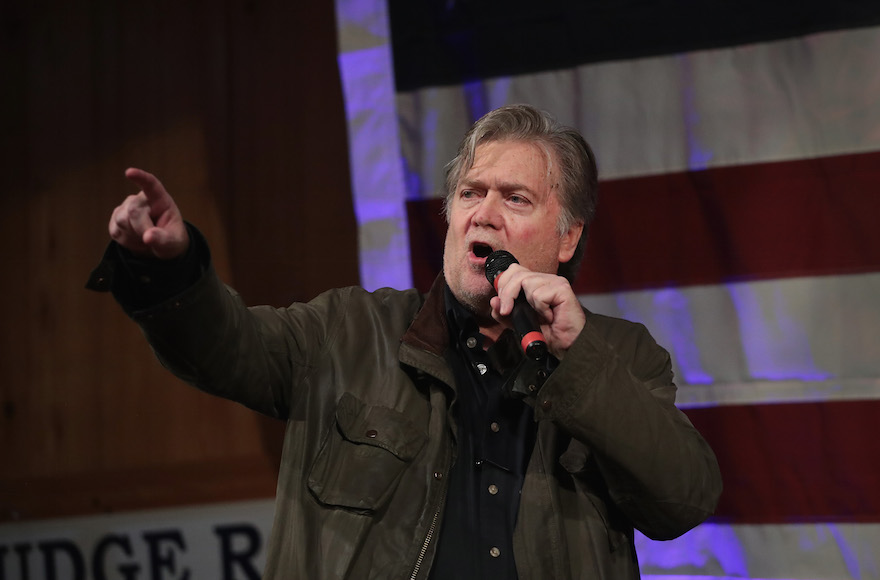 (JTA) — New Yorker magazine dropped former White House chief strategist Steve Bannon as a headliner at its annual festival after several high-profile stars scheduled to participate said they would withdraw because of his appearance.

Among those who announced their withdrawal hours after the lineup was announced Monday were Jim Carrey, John Mulaney and Judd Apatow. New Yorker staff members also tweeted their disapproval. New Yorker editor David Remnick was to have interviewed Bannon at the event.

Remnick said in a statement released later in the day that that he has been attempting to interview Bannon at length for several months.

A statement from David Remnick, editor of The New Yorker, explaining his decision to no longer include Steve Bannon in the 2018 New Yorker Festival. pic.twitter.com/opayiw5GQ2

He said the main argument against engaging Bannon in debate is “that we are giving him a platform and that he will use it, unfiltered, to propel further the ‘ideas’ of white nationalism, racism, anti-Semitism and liberalism.”

Remnick noted that an interview would not be endorsing Bannon or pulling him out of obscurity.

“The point of an interview, a rigorous interview, particularly in a case like this, is to put pressure on the views of the person being questioned,” he said.

Bannon, the former editor of the right-wing media outlet Breitbart News, which he once called  a “platform for the alt-right,” responded by calling Remnick “gutless.”

Remnick said he will continue to try to interview Bannon in “a more traditionally journalistic setting.”

The invitation from the magazine to Bannon was issued two months ago, according to The New York Times.

Bannon also was said to have urged Trump to move the U.S. Embassy to Jerusalem and to refuse to meet with Palestinian Authority President Mahmoud Abbas.