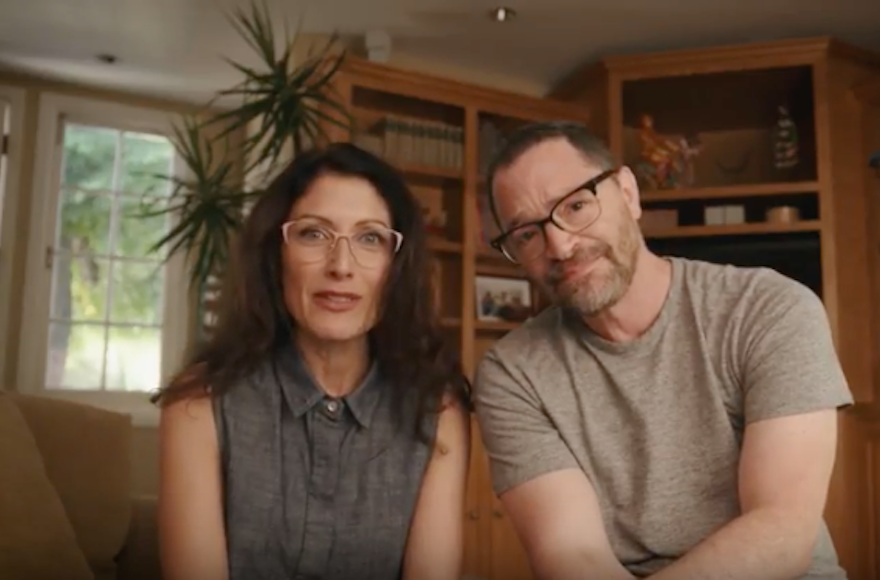 (JTA) — Joshua Malina and Lisa Edelstein are among the actors and comedians starring in a campaign launched by Hillel International to encourage college students to vote.

Malina, known for his role on the TV series “The West Wing,” and Edelstein, of “House,” portray parents congratulating their daughter on turning 18 and becoming a “MitzVote,” a play on the Jewish bar and bat mitzvah coming-of-age ceremony.

The actors portray relatives of the teen, from Rush as a reluctant sister to Black and Meadows as family friends who refer to her as “the second favorite” child, who congratulate her on being able to vote in short clips.

The video, released Thursday, marks the launch of Hillel International’s MitzVote campaign, which aims to register and engage 100,000 young voters on over 100 college campuses across the United States.

The non-partisan campaign aims to give “college students an opportunity to become engaged citizens in the way that b’nai mitzvot recognizes young Jews as an adult in the Jewish community,” according to a statement.

“Long before American democracy was born, Jews have been celebrating their b’nai mitzvot. This campaign is creating a meaningful coming-of-age experience for all Americans who turn 18 and are eligible to vote,” said Sheila Katz, vice president for student engagement and leadership at Hillel International.

The organization is partnering with Hillel chapters across the country, get-out-the-vote groups and Jewish fraternities and organizations as part of the campaign. The video was produced by Mik Moore, one of the creators of “The Great Schlep,” a Jewish initiative that promoted Barack Obama’s presidential run in 2008.

Katz told JTA that the fact that Moore’s past work did not affect the non-partisan nature of the campaign.

“We’re not endorsing any candidates, we’re not pushing out a particular agenda, other than voting is a Jewish value, and we were excited to hire a great creative agency that has a history of doing political campaigns and other types of campaigns,” she said.