Report: Abbas told Trump that if he wants a meeting, he should fire Jared Kushner and Jason Greenblatt 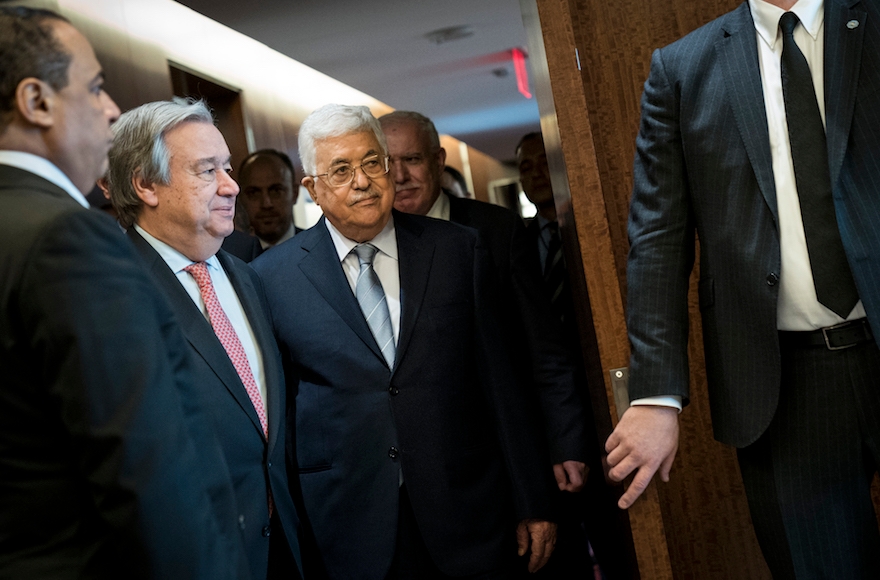 JERUSALEM (JTA) — The Trump administration has rejected as “untrue” an Israeli television report that President Donald Trump requested a meeting with Palestinian Authority President Mahmoud Abbas on the sidelines of this month’s United Nations General Assembly.

Channel 2 Hadashot news reported Tuesday on the Trump overture through an unnamed third party to reestablish ties with the Palestinians.

Abbas reportedly responded that such a meeting could only take place if the United States made diplomatic overtures. He reportedly demanded that Trump fire special Middle East envoy Jason Greenblatt and White House adviser Jared Kushner.

On Wednesday, Hadashot news stood by its story despite the administration’s denials and noted that World Jewish Congress President Ronald Lauder has served as an indirect intermediary.

Marquis went on to say: “Rather than engage in personal attacks against Jason Greenblatt or other members of the administration, we continue to hope that the Palestinian Authority will engage with the U.S. positively and constructively to advance our mutual goal of a better future for the Palestinian people.”

Abbas stopped talking to the administration after the United States moved its embassy to Jerusalem from Tel Aviv. Trump angered the Palestinians recently with his decision to cut U.S. funding to the U.N. agency for Palestinian refugees.