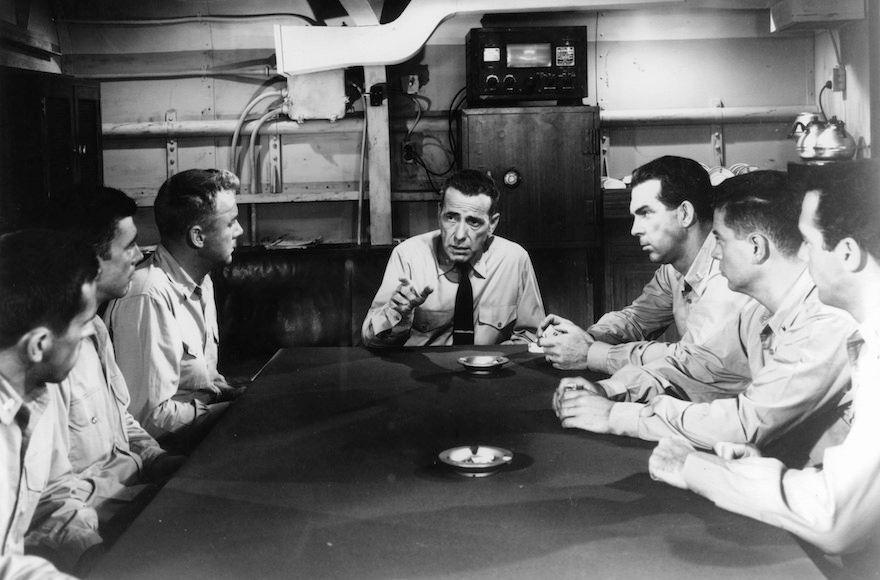 Humphrey Bogart, center, in a scene from the film "The Caine Mutiny," released in 1954. (Columbia Pictures/Getty Images)
Advertisement

WASHINGTON (JTA) — It’s hard to follow the news these last weeks without running into a reference to the 25th Amendment to the U.S. Constitution, which provides for the removal from office of a president unfit to serve.

Questions about Donald Trump’s capacity to govern arise in “Fear,” Bob Woodward’s chronicle of the Trump presidency that was released last week. Also last week, an anonymous senior administration official writing in an op-ed in The New York Times described a mercurial and dangerous president and said that whispers of triggering the 25th Amendment suffuse the workings of the administration.

Vice President Mike Pence, who would become president were the amendment triggered, denied that it was under consideration.

Omarosa Manigault Newman, an adviser to Trump who was fired earlier this year and has written her own book about administration dysfunction, claims that other officials tag #TFA in texts to each other about Trump’s mental peregrinations.

What’s less known is that the amendment owes its existence in part to a riveting scene of Jewish angst in a popular novel, play and movie, “The Caine Mutiny.”

Spoiler alert for the three people in the universe who have not seen an iteration of the “Mutiny” on late night TV, at their high school theater or on “The Simpsons.” Herman Wouk’s 1951 novel is about a group of Navy officers who remove a volatile captain from his command of a minesweeper when he freezes up during a typhoon. The officers are tried for mutiny and acquitted. The Pulitzer Prize-winning book, the subsequent play and the 1954 movie made “Captain Queeg” a byword for erratic leadership.

Humphrey Bogart earned an Oscar nomination for his performance as Queeg, who nervously spins a pair of ball bearings in his hand and obsesses about missing strawberries before breaking down on the witness stand.

Less well remembered is the twist at the end: At a celebration of the mutineering officers’ legal victory, Lt. Barney Greenwald, their defense lawyer, dresses them down for undermining Queeg before the typhoon. Greenwald insists that had the crew given Queeg the loyalty he deserved, he would have had the confidence to take control during the storm.

In the novel and the play, Greenwald’s Jewishness is made explicit.

“Greenwald’s Jewishness is at the moral heart of the piece, drama that rings true every moment,” a New York Times critic said in a positive review of the 1981 revival.

Men like Queeg, Greenwald tells the acquitted officers, protected the country from fascist invasion before the United States entered World War II, while the officers pursued lucrative careers until they were drafted.

The final scene  of the film — Hollywood! — denudes Greenwald’s speech of its Jewish content but preserves the power of its message: The men who protected Americans from fascism deserved better consideration.

“The Germans aren’t kidding about the Jews, they’re cooking us down into soap over there,” Greenwald says in the novel. “I just can’t cotton to the idea of my mother melted down into a bar of soap … I owed [Queeg] a favor, don’t you see? He stopped Hermann Goering from washing his fat behind with my mother.”

Wouk, who is Jewish, based the novel on his World War II experiences in the Navy. He served aboard two minesweepers, including the USS Zane. In addition to “The Caine Mutiny,” he wrote “The Winds of War,” a popular 1970s novel that made the plight of Europe’s Jews central to its sweeping account of U.S. involvement in World War II. He has also written a primer on Judaism, “This is My God.”

Greenwald’s agonized plea that commanders deserve fuller consideration of their ability to lead before they are removed informed the process that led to the passage of the amendment in 1967, as The Washington Post reported last week.

John Sutherland, a Harvard law professor asked to advise on the issue, told the U.S. House Judiciary Committee in 1956 about how he stayed up all night reading ‘The Caine Mutiny.'”

“Did you finish it in one night?” asked Emmanuel Celler, D-N.Y., the chairman of the committee, who eventually drafted the 25th Amendment with Sen. Birch Bayh, D-Ind.

“I finished it about 2 o’clock in the morning,” Sutherland said. “It is a bully novel.”

Sutherland apologetically added that he did not mean to “depreciate the solemnity” of the hearings by comparing the deliberations of Congress to a popular novel, but Celler, who was Jewish, appreciated the mention of Wouk’s work.

“It is an excellent analogy,” Celler said.

Sutherland likened a vice president who assumes the presidency simply by declaring the president incapable to Napoleon, who crowned himself emperor.

“Didn’t he seize the crown and put it on his own head?” he asked before adding that would not be acceptable to Americans.

John Feerick, a revered New York lawyer who helped draft the amendment, told the Post that the film was a “live depiction” of a constitutional crisis. The “Caine” analogy was not new to Feerick: He cited it in a 1965 book on presidential successions.

“A Vice-President would be on precarious ground in a case where a President had become insane, refused to declare himself disabled, or disagreed with the decision of the Vice-President,” he wrote at the time.

In those circumstances, Feerick wrote, a vice president might be “too reluctant to act or, if he did act, he might be labeled a usurper.”

Three weeks and a two-thirds majority to consider whether a commander deserves the humiliation of ouster. Barney Greenwald would approve.