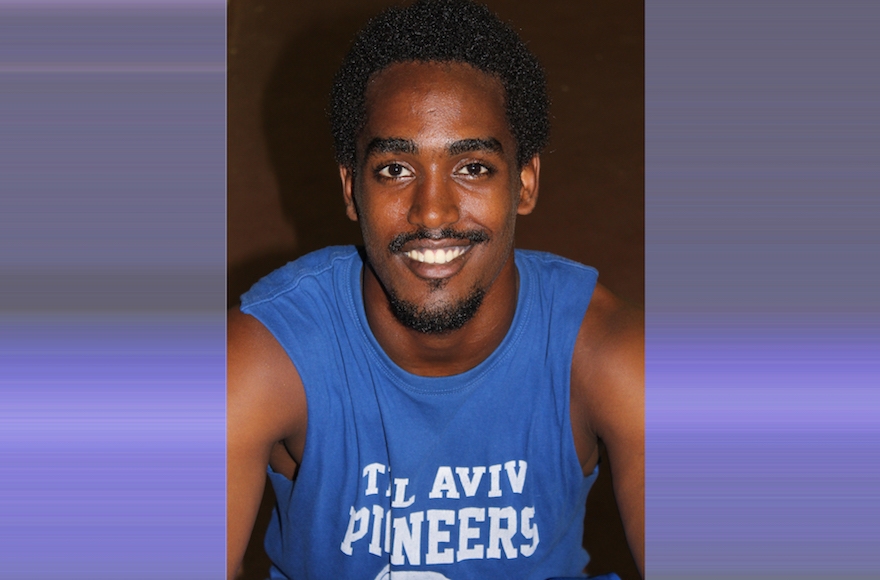 TEL AVIV (JTA) – In the summer of 2011, Yuval Fenta saw two guys tossing a football on the beach in Herzliya. He asked to participate.

“You’re too small,” they responded.

A dejected Fenta retreated, but not before hearing them mention an American football league that played in Israel.

Now a 21-year-old running back for the Tel Aviv Pioneers, the son of Ethiopian immigrants for the past three seasons has earned the Israel Football League’s Offensive Player of the Year award. In 2017-18 he ran for 1,561 yards, averaged 6.9 yards per carry and scored 14 touchdowns.

Before that, with the Kfar Saba Hawks, he twice won the Israel High School Football League’s Most Valuable Player award and led the team to a championship each of his three seasons. Right after graduating to the adult league, Fenta led Israel’s national team to a 2015 European championship.

This season, which begins Nov. 15, will be Fenta’s last in Israel. Beginning in 2019, he intends to play college football in America — in Division II, or maybe even Division I, the highest level. (The 2018-19 season will be the eight-team IFL’s first playing 11 on 11, having previously fielded nine a side due to a shortage of players.)

Before applying to U.S. colleges this winter, Fenta is studying to improve his English to succeed on the Scholastic Aptitude Test, a key entrance exam. Only in high school, he said, did he understand that good grades could open the door to college.

Now, “no one can set limits for me. I’ll decide what I’m capable of doing,” Fenta said on an early-September evening in Yarkon Park’s Sportek complex prior to the Pioneers’ first preseason practice.

As to playing Division I football, where the best American college players compete, the 6-foot, 180-pound Fenta said: “They’re bones and muscle, just like I am.”

For 2 1/2 years, prior to his discharge this week, Fenta served in the Israeli army with “active athlete” status — the only football player so classified. He would have preferred serving in a combat unit, as did three of his brothers. But his status enabled him to work in a part-time desk job – he handled paperwork covering wounded soldiers’ medical care – while developing his athletic ability.

Fenta is one of nine children born to Ethiopian Jewish parents who moved to Israel in 1991 from their village near Gondar. The next year, Fenta’s father, Adeba, traveled to Ethiopia to bring his parents to Israel. Yuval’s paternal grandparents are both centenarians and live near Haifa.

When their son first took up football, Fenta’s parents feared for his safety – especially after he broke a leg late in his first season with Tel Aviv.

“But they quickly realized that this is me,” he said.

They cover his gym membership, prepare protein-laden meals and buy him whole wheat bread. “Relative to their means” – Adeba works as a gardener and his wife, Ungudai, cleans homes – “they pay more for me than rich parents do for their kids,” said Fenta, who works as a waiter.

Coaches and teammates said that though he is quiet, Fenta is a leader. Fenta paraphrased former NFL wide receiver Cris Carter in saying that football developed his personality and character. The Israeli standout met 18 NFL Hall of Famers, including Carter, who visited Israel in June 2017.

“That’s what we hope for in our life,” Carter, who played for the Philadelphia Eagles, the Minnesota Vikings and the Miami Dolphins, told JTA. “We as Hall of Famers know the platform we have. We’re very careful with the things we say, realizing that everything we say is like a [stone] thrown in a pond. It’s going to have a ripple effect.”

IFL Commissioner Betzalel Friedman called Fenta “the best running back in the league since he entered – it’s not even close” and offered this scouting report: “He knows how to be patient as a runner. He can turn on the jets. He can run behind his blockers and find a hole. He’s also not afraid to lower his head and have contact.”

Itay Ashkenazi, Kfar Saba’s former head coach, remembers being stunned when Fenta, gained 15 yards on a sweep, vaulted several feet over a would-be Haifa tackler and ran for another 15. On defense, at outside linebacker, Fenta displayed speed, strength, tackling ability and, overall, was “a shut-down player,” Ashkenazi said.

His Kfar Saba teammate and fellow captain, Damian Faur, cited a critical play that Fenta made on defense, also against Haifa.

Kfar Saba was leading 32-30 late in the 2014 championship game, but Haifa was driving deep in Kfar Saba territory. After a completion, Fenta and a teammate crashed into the receiver, who fumbled. Fenta recovered the ball and the championship was secured.

“I’m not surprised that Yuval was the one who won the game,” Faur said.

Gvili plans to employ Fenta as a linebacker-safety hybrid this season. Playing offense and defense, Gvili believes, will help Fenta showcase his skills for the American colleges he approaches.

“A talent like him should keep working on his craft,” Ashkenazi said. Fenta, he said, “can play college football, for sure.”

At Sportek, Fenta joined his teammates for practice on an unmarked grassy patch squeezed between basketball courts and a busy street. The nearest light tower beaming in their direction was at least 100 yards off. They danced into and out of stringy boxes in an agility drill, sprinted station to station toward cones, got into position to tackle and be tackled. Fenta and others absorbed a coach’s instruction to linebackers, then dropped quickly into zone coverage.

Being a dual threat appeals to Fenta. Heading off to another country, even just for a few years — that will be challenging.

“It will be hard for me,” he said of leaving. “I’m very patriotic, very Zionist.”